[hr]
Like most Americans, I had my first exposure to the fiction of W.W. Jacobs’ perhaps most-well-known tale “The Monkey’s Paw” in the guise of a reading assignment in California’s public school curriculum in the mid 1990s. I remember vividly the tale of wishes gone wrong, the ominous hint of reanimated corpses, and the moralistic bent of the incarnate proverb that people should ‘be careful what they wish for.’

In 1992, an adaptation of the tale was aired and reran throughout the nineties in America on the Canadian horror television show aimed at children, Are You Afraid of the Dark?. That, along with countless adaptations, has made this story one of the most pervasive weird tales in American social consciousness. Yet, such universality, while opening the doors of access to literature, has closed others, like our ability to understand it. All publications scholarly regarding Jacobs’ work (this story in particular) are not based on its interpretation but rather its place in pedagogy and relation to the spread of literacy.

The story begins in an idyllic fashion. A family lives on the outskirts of town. A father (Mr. White) and son (Herbert) engage in a game of chess as Mrs. White prepares the house and dinner for their guest, Sergeant-Major Morris. As these characters exist only whole and entire unto themselves within a fictional narrative, it is pointless to argue psychoanalytic minutiae regarding their mental state. The only thing we can draw conclusions over is the language in which their expression is couched. The only thing we can infer comes from the way in which Jacobs has decided to render his tale.

After a few playful barbs between father and son, “Mr. White looked up sharply, just in time to intercept a knowing glance between mother and son. The words died away on his lips, and he hid a guilty grin in his thin grey beard.”

From this point, we get a glimpse into the dynamic between the three. It is, at its best, a loving and witty family, harmlessly expressed in adversarial terms. The aggressive ‘interception’ of judgment regarding Mr. White is an object of jest between her and their son. Being cut out of the joke, Mr. White can only share a ‘guilty smile.’ Guilty perhaps because of his own jealousies regarding his son and wife and the even-more-unthinkable/unutterable possibility that the father deeply envies the son.

The admission expresses guilt twofold, first that there is something wrong with the mother and son’s close bond and secondly that there is even anything to feel guilty over. The guilt is expressed in the resentment he does not think he should have. This moment unlocks the thrust of Jacobs’ dramatic structure. In what seems perfect, we have a hint of darkness that the characters won’t even admit to themselves. After this establishment, the catalyst for revelation is introduced.

The dinner guest, Sergeant-Major Morris, brings with him tales of his time in India, as well as a specific cursed object, which he attempts to destroy in the Whites’ presence. When asked about its provenance, Morris replies, “It had a spell put on it by an old Fakir…a very holy man. He wanted to show that fate ruled people’s lives, and that those who interfered with it did so to their sorrow. He put a spell on it so that three separate men could each have three wishes from it.”

From this statement, we may first deduce the purpose of the titular object. The paw itself is didactic. Its very nature is to impart the terrible wisdom unto humans that their attempts to alter fate are fruitless and only lead to misery. When questioned about whether or not it works, Morris tells them he only knows it worked for its last owner: “The first man had his three wishes. Yes…I don’t know what the first two were, but the third was for death. That’s how I got the paw.” 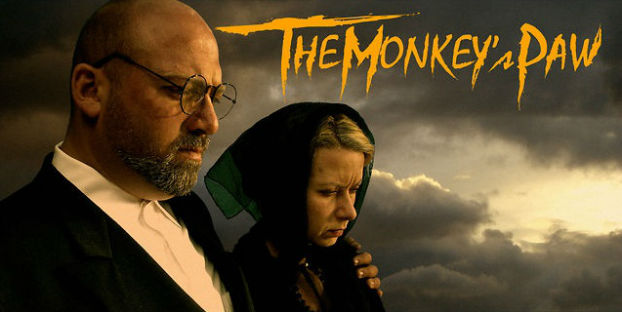 From this, we know that Morris believes that the paw works and that the final wish granted to the last owner was death. A plain reading of this story will follow the logic that as each wish yields a terrible outcome, then it makes sense for the final wish to be for death. But if we read this statement in line with the paw’s purpose, a whole new and ominous possibility arises. If the paw was made to prove that the act of wishing is antithetical to the forces of fate, then the last wish fulfilled by the paw is not a last resort but an earnest desire.

It then becomes apparent that the paw does not give you what you want at a terrible price; it grants your darkest desires. Death being entirely within the hands of an individual, the previous owner could have taken his own life voiding the paw’s purpose. To die without having made the last wish places the paw in perpetual ownership of the dead man and breaks the chain, but, in the context of a wish, the paw fulfills its purpose and continues to circulate in the market of fate.

All of these possibilities are at play at the end of the first part. The paw passes from Morris to Mr. White and the protagonist is left to ponder the nature of his ability to wish. While it begins in jest, no wish is made until, at the urging of his son, he wishes for two hundred pounds to clear his house payments.

The next day, mother and son continue their exclusionary relationship and jokes at Mr. White’s expense. Teasing, Herbert says, “Well, don’t break into the money before I come back…I’m afraid it’ll turn you into a mean, avaricious man, and we shall have to disown you.” Herbert peeks through the nature of the obvious wish (for two hundred pounds) and playfully insinuates that in fulfillment of that wish, the father will turn greedy. Mr. White does turn greedy but not in the way a far reading of the story will lead the reader to believe.

The avarice Herbert perceives is real. It is denoted in the language of the text. It is not greed of money; it is greed of privilege. His desire to have Mrs. White all to himself is the underpinned nature of the wish. The house gets paid off with the granting of the real wish. Young Herbert is “caught in the machinery,” at work and the family is gifted two hundred pounds. We find out that “unconscious of his wife’s shriek, the old man smiled faintly, put out his hands like a sightless man, and dropped, a senseless heap, to the floor.”

The faint smile is obviously disbelief and a common reaction in literature to the absurdity of life, but then the specter of guilt comes back into it. Only a few sentences before, at the news of their son’s death, Mr. White takes “his wife’s hand between his own, pressed it as he had been wont to do in their old courting days nearly forty years before.” In the absence of his son, he is finally able to hold his wife’s hand again and in the same way he did when they were young. He has her all to himself in this world without Herbert and he is pleased by this, yet he knows he shouldn’t. The smile is absent, the wish fulfilled.

It is the aftermath of the first wish that brings about the second. After the funeral, the Whites return to their empty home. Mrs. White wants 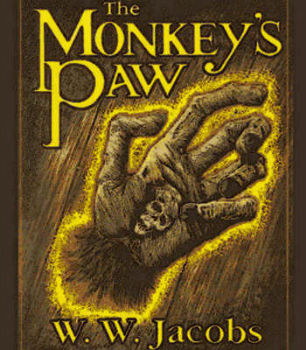 her husband to use his second wish to bring their son back from the dead. Mr. White “turned and regarded her, and his voice shook. ‘He has been dead ten days, and besides he – I would not tell you else, but – I could only recognize him by his clothing. If he was too terrible for you to see then, how now?’”

To this, his wife responds, “Bring him back…Do you think I fear the child I have nursed?” Mr. White does not desire to see his son as the sight may be too horrible for either of them to witness. Mrs. White is insistent that it will not matter, calling back to maternal insight. She feels as though it would not matter how he comes back, as long as he does, but her husband may have his own reasons for not wanting to see the son whom he has ‘wished’ dead. His fear of this wish, knowing the wish he had last (which he did not make, but somehow how the paw knew) might come true. Mr. White has “a horrible fear that the unspoken wish might bring his mutilated son before him ere he could escape from the room.”

What the paw brings about is the horror of the wishes we know we want, but could never make. As the unseen caller from the night knocks at the door, Mr. White cries, “For God’s sake don’t let it in,” leading Mrs. White to the conclusion that he is “afraid of [his] own son.” The story is never explicit on the nature of this fear. Whether it’s simply fear of the Natural Order circumvented or the fear of being confronted by your deepest desire, we can never know for sure. But one thing is for sure, this is no story for kids.

Mrs. White wants to let her dead son into the house. She begins to open the door, “and at the same moment [Mr. White] found the monkey’s paw, and frantically breathed his third and last wish…and a long loud wail of disappointment and misery from his wife gave him the courage to run down to her side, and then to the gate beyond. The street lamp flickering opposite shone on a quiet and deserted road.”

The text of the final wish is completely omitted. We can infer what the wish was. It is rather obvious that Mr. White has wished his son away. While both the first and second wish are given quotations, the third is left unspoken. Like a true name for Frankenstein’s creature or H.P. Lovecraft’s frequent references to the unnamed, the leaving of something nameless is the true mark of horror, making the third and final unspoken wish the true horror of “The Monkey’s Paw.” Namely, the act of wishing away your own son.

Mr. White engages in the dark thought that surrounds the alternate reading of the paw as symbolizing a desire/fate dichotomy as well as the wish he has just made to clear his house payments with two hundred pounds. The story relates that “he sat alone in the darkness, gazing at the dying fire, and seeing faces in it. The last was so horrible and so simian that he gazed at it in amazement. It got so vivid that, with a little uneasy laugh, he felt on the table for a glass containing a little water to throw over it. His hand grasped the monkey’s paw, and with a little shiver he wiped his hand on his coat and went up to bed.”

This phantasmagorical phenomenon Mr. White witnesses can be seen as simultaneous prophetic foreshadowing and non-verbal exposition. Morris’ narrative and this strange series of visions lock Mr. White into the chain of the wish. The other faces, we can assume, are Morris, then the fisherman, followed by the monkey whose paw he now holds. Each figure slips indeterminately from agent of power into victim. The monkey, being the first victim, is now an object of power, each owner having the power to wish and the destruction that follows. Suddenly power and suffering are simultaneous to the human condition. What looks like desire, then suffering, later becomes the desire to suffer.