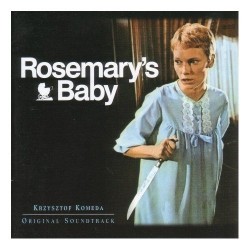 The Devil in cinema pops up unexpectedly. In 1956, Catholic Cardinal Spellman and Episcopalian Bishop Pike clashed hotly over the movie Baby Doll, which Spellman denigrated as pornographic and Pike declared profoundly-Christian in message. Their difference of opinion made national headlines. I find this historical snippet interesting and relevant to this review because it illustrates how film has the ability to rattle organized religion to its core. Rosemary Woodhouse raised a question that has tortured humankind since the first religious inclinations took root in collective human thought: Is there a God?

That is a pretty big theme to explore musically and the soundtrack’s composer relied more on silence than music, because most of Rosemary’s Baby is filmed without musical accompaniment. The sparse, seven-cue score is connected by three very-bold vertebrae: The main titles; Rosemary’s drive home from the library after discovering she lives next door to a coven; and Rosemary’s first confrontation with Andy, her demon baby. The main titles aren’t long. They’re straightforward and to-the-point: a mocking lullaby. A lullaby that is cold and eerie. There is no comfort here.

The unusual brass that wails when Rosemary first sees Andy towards the end has similar trills to the Les Baxter theme, Lassie. It’s odd how the same musical trills can have such vastly different connotations. All music is built on a handful of notes and the meaning is often dependent on the context. Visual context supplies the stimulus in film music, but try to imagine the music without the picture. In order to judge whether the music is a good reflection of the story, you have to explore the story and its roots.

Rosemary’s Baby is given high credit for staying true to the original book by Ira Levin. This is a story about the birth of Satan’s son on Earth, the usurper of God’s power. This story was popular with audiences because everyone has a personal beef with higher authority. Folks often egg on a rising troublemaker. Wrath is wrath, regardless of the alleged justification. All wrath welcomes rebound. The point of Rosemary’s Baby: If God is dead, Satan is his successor. Now here’s the question this reviewer asks: Does Satan have what it takes to be God’s successor? My answer: No. No, because the Devil is in the details and on close examination of the Old Testament, Satan, once upon a time, was nothing more than an annoying little insect to God.

This is still hotly debated among theologians who are still slicing snake-and-star metaphors in Genesis, but the first explicit reference to Satan in the Old Testament is in the Book of Job and he is referenced as ‘Ha-Satan’, which is Hebrew for “the accuser”. (Bolozky; 501 Hebrew Verbs, pg. 37, 1996) That’s it. That’s all he is. “The accuser.” He is not an omnipotent presence or a dark lord commanding legions of nightmarish minions. He isn’t even referenced as being an angel here. He could be human, going by the actual facts indicated by the Book of Job. It isn’t until the dawn of the New Testament that the nebulous character Ha-Satan bloomed into the more familiar dark angel of Hell. (Hell also isn’t recognized by the Hebrew Tanakh) This shift in attitude reflected the shift that Christianity embarked on as it steered away from Judaism and suffered wrath for turning against its forerunners. It wasn’t until after the Christian diaspora that the Devil was seen as a physical presence capable of horrible things on Earth. True evil is the absence of knowledge. Music cannot give shape to what isn’t there and evil is absence, not substance. Thus, the score has to keep its counsel, augment a few emotional scenes, and leave the rest to silence.

Merry Christmas, Everyone! Thanks for spending some of it with us at Innsmouth Free Press!