Pibgorn is a fun and imaginative comic strip by artist Brooke McEldowney that has been running since March 11, 2002 (Imagine my 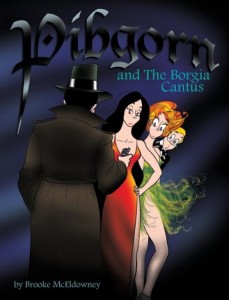 surprise. I’ve been reading the thing practically from the beginning and didn’t realize it had been that long). It’s a little hard to describe, so bear with me: Pibgorn is a dew fairy who falls in mutual love with a human organist, Geoff, one snowbound Christmas. This is a bit complicated by the existence of Geoff’s fiancee, Drusilla. Said complications only grow when it turns out that Drusilla is: 1. a succubus demon from Hell; 2. genuinely in love with Geoff; and 3. ready, willing and able to snuff any competition (including a hapless fairy) from existence. Problem is, Pibgorn won’t stay dead. So, a grudging truce slowly grows into respect, morphs into alliance and, at this point, they’re all BFFs and Drusilla’s pretty much reconciled herself to Pib and Geoff being lovers. Which is good because Drusilla is nearly omnipotent and practically indestructible, two traits frequently tested by an array of extremely nasty enemies ranging from the demonic to the extraterrestrial. For example, this current storyline has involved amnesia, android sex, vampires, a Martian invasion, and a volcano used as a gun barrel.

With me so far?

McEldowney has quite an internet following (the strip only exists online), due to crossover with his more “domestic” strip, 9 Chickweed Lane, and Pibgorn‘s spicy blend of sex, violence, tightly-woven strip mythology, and true love/friendship (Hey, Drusilla is a succubus). So spicy was it that McEldowney moved the strip from its original home at Comics.com to GoComics.com when he parted ways with United Feature Syndicate in 2007. Since his beautifully-coloured strips can vary in frequency from three to five times per week, it can take a year or more for a story to reach a resolution, but McEldowney is well-known for pulling out some doozies on that score. So, it’s usually worth the wait.

My personal favourite is probably the highly-experimental, wildly-meta rendering of Shakespeare’s A Midsummer Night’s Dream, set in a 1930s, gangster Chicago and populated by characters from both of his strips. But my favourite character is Nat Bustard, a private eye with a dark secret (but I won’t spoil it for you), who first appears in The Borgia Cantus. In addition to its blatant homage to detective noir (and, of course, Humphrey Bogart), The Borgia Cantus has a lot of implicitly (and not-so-implicitly) Mythos elements, being about a cursed book loaded to the gills with demons and threatening a world-wide apocalypse if they are released.

Pibgorn‘s multiple-universe is a strange one, possessing apparently no singular Heaven or angels (Though Drusilla, especially, has gone into space several times). It does, however, have a well-populated and extremely-vicious Hell, which the strip has visited and explored more than once. McEldowney has a really good time developing his story’s varied demonology. It also has a benign apparent God figure, Thorax (or that could be Thorax’s nebbishy buddy, Monty), who is omniscient, omnipotent, nearly-omnipresent, and a complete idiot. Thorax also spends time in 9 Chickweed Lane, further muddying the waters of who/what he is, exactly. Far from hating Drusilla (who has been turned Chaotic Good by her selfless love for Geoff and friendship with Pibgorn), Thorax often helps her with the more delicate situations that don’t lend themselves well to her usual sledgehammer approach. Or he may just show up with a handy snack. 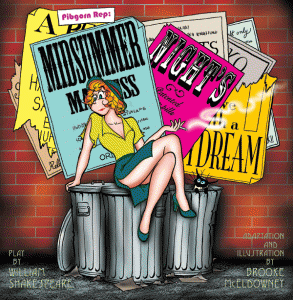 Considering that the central motif of the strip is a love triangle involving two powerfully supernatural women and one mortal man, and McEldowney has a good time drawing impossibly-hot women (That’s colouring, not superhero costumes, on both Pibgorn and Drusilla, who are green and red, respectively. They are, in fact, totally naked most of the time), you’d think Pibgorn would be pretty sexist. Well, it’s not. Drusilla is powerful, but not all-knowing, so she’s constantly on her guard against enemies who are nearly as powerful as she. Pibgorn is no slouch in the power department, either. And though Geoff is usually involved in the plot in some way, he definitely plays Mary Jane to Pibgorn and Drusilla’s Spiderman and Batman. In fact, plot complications most often revolve around Dru and Pib watching each other’s backs when trouble comes. These ladies are no pushovers, so if you’re looking for some weird fun, great art and tough (and hot) heroines, you should definitely check this out.

If you’re up for a look, go check out the strip at Go.Comics.com.