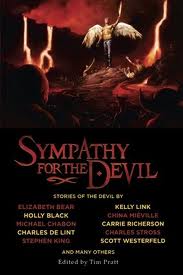 “Pleased to meet you.

Hope you guessed my name.

Aw, what’s puzzling you is

Just the nature of my game.”

– Mick Jagger and Keith Richards, “Sympathy For The Devil”

Offhand, I would say that it’s easier to believe in the Devil than in God. In fact, I’d even go so far as to say that he, rather than Jesus, has been the central theological figure of American Christianity over the last hundred years. To the more extreme elements of this crowd, he is the automatic scapegoat for every great social upheaval, be it immigrants, the automobile, women’s liberation, gay rights, 9/11, or the Katrina aftermath. On the other end of the cultural street, bluesmen and several of their rock’n’roll heirs (The Rolling Stones, Black Sabbath, AC/DC) have celebrated him in song, with an eye towards being truthful. Several original Twilight Zone episodes (my personal favourite of this series: “Of Late I Think Of Cliffordville”) and too many horror movies to count (good AND bad) have kept his Satanic Majesty’s visual presence strong in the latter half of the 20th century.

On the surface, it’s a little puzzling as to the why of this enduring popularity. The Devil is only mentioned a handful of times in the Bible (Old AND New Testament). Most of the stories about his trickeries and buying souls were the fabrications of medieval priests who were just reworking stories of the Fae to fit their own agenda (see the Grimms fairy tale, “Bearskin”, for a typical-albeit-entertaining example). So, what keeps people believing in him? My answer: there are certain acts that humankind does to itself that are so beyond the pale that to call it anything but ‘evil’ is to all but deny evil’s existence. Of course, everybody else has their own ideas on the subject…which leads us to Sympathy For The Devil, an anthology that dissects the Devil’s many facets.

To this anthology’s eternal (infernal?) credit, it is a showcase of both well-known and lesser-known writers, and the lesser-knowns comprise the majority of the collection. So, sure, come for the Stephen King piece (“The Man In The Black Suit”, a nasty takeoff on the Devil as soul-eating thug, set in early 20th century Maine) or the two Neil Gaiman stories (“The Price”, which has a black feline as a lone sentinel against another Devil thug and “We Can Get It For You Wholesale”, a blackly humorous piece about an ever-escalating hit job). By all means, don’t miss Robert Bloch’s biggest pre-“Psycho” short story credit, “That Hell-Bound Train” (and let it be a springboard for you to check out the rest of this man’s much-neglected bibliography), or Nathaniel Hawthorne’s “Young Goodman Johnson” (which, incidentally, was King’s inspiration for “The Man In The Black Suit”, though this story’s Devil is more of a tester of faith than pitiless devourer). But that’s just the frosting on a very rich cake. Many of the lesser-known writers strike, in my view, much richer veins of literary gold.

Maybe it’s better to compare this collection to a very tasty buffet than a cake. Every author brings his/her own unique flavour of the Devil to the table. I’ve mentioned the brutes, but there are also the deal-makers, who promise you anything from a favourite pet’s revival if you beat him at an eating contest (Holly Black’s “A Reversal of Fortune”) to how to win at cards if you can survive the waiting period (Kris Dikeman’s “Nine Sundays In A Row”), or vengeance against the white man for stealing your land (Sarah Zettel‘s “The Redemption of Silky Bill”). Sometimes, the deals are more corporate in nature. The Devil has things he must buy in order to keep his kingdom going, be it upgraded special effects for the fiery pits (Scott Westerfield’s “Non-Disclosure Agreement”), a new six-lane highway leading to and out of Hell (Carrie Richerson’s “With…By Good Intentions”), or serving eviction notices on an unsuspecting small town due to overcrowding in Hell proper (Jonathon Carroll’s “The Heidelberg Cylinder”). In a few of the stories, the Devil even turns out to be a nicer guy than you’d expect, be it a happily-retired corporate executive who is now doing good in the world (Scott Bradfield’s “The Devil Disinvests”) or a worldly-wise bartender, who is only the first of many dispossessed, thanks to afterlife downsizing in both Heaven and Hell (David J. Schwartz’s “Mike’s Place”).

Bottom line? It’s really, really hard to pick standouts in a collection this awesome. Not since I’ve read Clive Barker’s “Books of Blood” have I felt so spoiled for choice on which stories to put above the others. Still, there are a few of the exhibits that I think should be pointed out:

Of course, as is often the case with anthologies, not every story is a winner. “Lull” is a narrative mess that attempts to structure itself like a cross between William Burroughs and the 1001 Arabian Nights, only to fail miserably. Mark Twain’s “Sold To Satan” was a long, pointless dissertation that made me wonder why he wrote it to begin with. Finally, “Faustfeathers”, which combined the legend of Faust with the Marx Brothers classic film, “Horsefeathers”, just made me scratch my head. As it was written as a play, I wonder if it would make more sense being put on the stage.

Of course, I’m well aware that some of my choices of favourites on this anthology may well be equally baffling. Perhaps that’s the neatest trick and lesson of Sympathy For The Devil. It reveals the blank screen that he truly has become and makes us look at ourselves to see what we truly define as evil in our own lives. Highly recommended!

Sympathy For The Devil is available through Amazon.com.