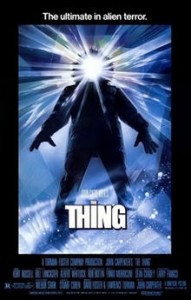 When I first started doing Cthulhu Eats the Movies, I mentioned that, in my opinion, the most Lovecraftian movie of all time was John Carpenter’s The Thing, but I chose to tease it a bit and promised to cover this flick on a later date. Naturally, I promptly forgot about doing that, as other films kept popping up on my radar. Oops. Then came the remake/prequel/blatant rip-off/whatever of The Thing. If there was any silver lining to the dark, sad, inept cloud that was that movie, it was that it reminded me: “Oh, yeah, I never covered the original film for CEtM.” Well, it’s time to fix that oversight and, hopefully, wash the nasty taste of remake out of my brain.

Hey, a boy can hope, right?

On to better things. Just in case you’ve never heard of 1982’s The Thing, here’s a bit of history for you. John Carpenter’s film was a very lose remake of the 1951 sci-fi classic, The Thing from Another World. The funny thing is that the latter film was a much more faithful adaption of the original story than the first film. That story would be the 1938 novella, Who Goes There? by John W. Campbell, Jr., which some have suggested was heavily influenced by H. P. Lovecraft’s At the Mountains of Madness. So, there you go – a possible link to Lovecraft in just three steps, Six Degrees of Kevin Bacon-style. It doesn’t get much more Lovecraftian than that, but if you still don’t believe me, let’s get to the movie’s plot.

A group of Americans are about as isolated as you can get, and still be on earth, at a research station in the Antarctic. They have their monotony broken one day by a couple of “crazy Norwegians” in a helicopter, chasing a sled dog across the snow, shooting and tossing grenades at it. After the nutty Vikings die and the Americans save the cute little doggie, they take their own chopper to the Norwegian camp, to see what the hell is wrong with them, just before a big storm is set to roll in and isolate the base even more than it already is. At the other camp, the Americans discover all the Norwegians dead. Through video logs, they learn that they found not only a bona fide flying saucer, buried in thousands-of years-old ice, but the spaceship’s pilot. They find the big, now-empty block of ice that once held the alien. Outside the camp, they come across some twisted, obviously inhuman thing, dead (hopefully) and all burnt up. Wisely, they leave that horror alone, but little do they know that their own camp has already been infiltrated by the alien. Yeah, there was a reason why the Norwegians were pretty adamant about killing that dog.

The freshly-thawed-out alien is a shapeshifter, but in a twist that I always liked, it doesn’t go about it in the way you would first think. In most stories, the monster would kill or eat someone and then take on their form. It would do this again and again, always becoming someone new, but always remaining a singular threat. Here, the thing infects others, taking them over at a cellular level. In essence, it doesn’t become you; you become it! That means the threat can spread and multiply and that ramps up the paranoia and fear. Now characters don’t just have to wonder which one of their friends is the alien, but how many of their friends are really monsters in disguise. That is a huge difference and, also, with the themes of infection and corruption, quite Lovecraftian. But wait; we’re just getting started with the HPL homages.

Take the alien itself. When it’s not running around in human guise, it’s wonderfully gooey, tentacled, amorphous, and indescribable. Yes, the only word that really seems appropriate for it is thing. But it’s not some mindless, slobbering beast, a big, scary critter with one neat trick. No, this thing is impossibly old, has been to countless alien worlds, and is very smart. Not just clever in a predatory animal way, but, in a scene often overlooked by many, the thing was actually building a new flying saucer so it could escape the antarctic wastes, to get to a populated area where its infection would spread like wildfire and become unstoppable. What’s more frightening than a horrible, unkillable monster that could be anyone? One that is much smarter than you.

This utterly alien and wonderfully unique monstrosity was brought to amazing life through some of the best-looking special makeup effects ever created. They are simply mindblowing in their complexity and ingenuity, and still, all these long years later, look spectacularly seamless. They are also miles better than the crappy video game-looking CGI the recent remake falls back on. I can think of no better example of doing something with skill, style and love vs. doing something slipshod, in a rush, and for cheap than comparing the 1982 thing with the 2011 one. But I’m about to slip into rant mode, so we had better move on quickly.

On to acting, directing and overall story. First, there are the actors, with Kurt Russell, Wilford Brimley, Keith David, and a half-dozen or so other “Hey, I know that guy” players, all at the top of their game, playing things deadly serious, and not phoning it in just because it’s a silly monster movie. I especially liked Kurt as the star of the show, helicopter pilot MacReady. I usually like Russell in almost anything he does, and certainly in all his team-ups with director John Carpenter, but for me this is his best role. He’s tough, yet not an indestructible action figure. He’s smart, but more clever than bookish. He has an air of a natural, yet reluctant, leader to him and all this is portrayed very well. While all the actors turn in solid performances, there’s a reason Kurt Russell is the star.

Another great thing about The Thing is the tone. I said before that the actors played things deadly serious. That’s because the story is deadly serious. There are only two real moments of levity in this otherwise relentlessly bleak movie. Because they are so few, they both work wonderfully. One comes when one of the men, after being part of a truly horrifying ordeal and helpless to do anything about it, professes rather loudly that he doesn’t want to spend all winter tied to a couch. The other is pure comedic gold and is one of the most memorable and best-delivered deadpan lines I’ve ever heard. If you have seen this movie, you already know which one I’m talking about and that only proves just how good it is. So, since you either already know where I’m going with this, or you haven’t seen the movie, I won’t say what it was here for fear of ruining the punchline. If you have yet to see this film, trust me, you’ll know what I’m hinting at when you see it.

Now, there is one school of thought that says horror and tension should be broken up in a movie by scenes of humour, to give an almost rollercoaster-like experience of highs and lows, highs and lows. And yes, sometimes, that works very well, but The Thing does things very differently. Once the horror, tension and paranoia start, they never let up. Instead of a rollercoaster, the audience finds itself on an icy slope, in a locked car without brakes, leading down to a cliff and a 1000-foot drop. Everyone knows that something bad is going to happen, but there’s nothing they can do to avoid it, so they just have to sit back and enjoy the ride. Very few fright films take this approach, anymore, and that’s a shame, because when it works, like it does here, it really works.

Final Verdict: Let me do a summation of this movie for you without giving away any of the specifics to see how Lovecraftian it is. In a time far before man, an alien thing drifted down from the stars to Earth. This thing is impossibly old. It has conquered countless alien worlds and has powers that, while natural to it, man would surely call “magical”. But, thankfully, it wasn’t its time and so, it fell into a deathless slumber for untold aeons. Then, in a desolate corner of the world, it is awakened by Man’s curiosity. It is shapeless, utterly alien, far beyond Man’s reason. It corrupts everything it touches. It has methods and motives Humanity just can’t comprehend, and is nigh-invincible. If it ever fully awakens (Read as: Gets to a populated area), it will change the world forever and then there will be no way of stopping it. The only hope for Humanity is a small group of frightened and half-crazed men who must sacrifice everything for even the slimmest chance of keeping the threat in check. And even when it’s all said and done, when the ultimate sacrifice have been paid by everyone, there’s still the very real possibility that the heroes have failed and that the alien thing will, in fact, win. Now, it just doesn’t get more Lovecraftian than that. The Thing hits all the salient points of Lovecraft’s cosmic horror without being directly tied to any of HPL’s stories. No other film comes close to this one in pure Lovecraftiness. Add to that the fact that The Thing is just a great, relentless, paranoia-filled fright film and it easily makes my personal Top Three Films of All Time list. This movie is Lovecraftian, it is horrifying, it is awesome.