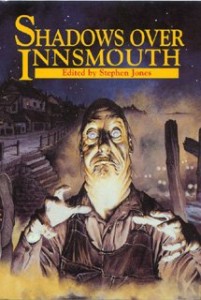 As a new regular feature of the Innsmouth Magazine, we’re looking at the short stories and novels that emerged in response to the classic H.P. Lovecraft story, The Shadow Over Innsmouth.

Our goal is to build an appreciation for the wide variety of themes, tones and choices writers have made. Whether to ground it firmly within the Mythos, and particularly the aftermath of The Shadow Over Innsmouth, or to venture off into entirely new territory.

We want to ask: Would this story hold up on its own if you didn’t know The Shadow Over Innsmouth and, if you do know the story, does it enhance the horror or water it down?

Because this is also Apocalypse Week, we’re going to start with fantasy master Neil Gaiman’s 1994 short story “Only the End of the World Again”. Gaiman has written other short stories inspired by Lovecraft’s work, including the Sherlock Holmes pastiche, “A Study in Emerald”, and the humorous “I, Cthulhu”. Gaiman is no stranger to Lovecraft’s work, and has written work just as epic in scale, whether it’s American Gods, or his Sandman series and various spin-offs.

So, approaching this story, we anticipate Gaiman’s trademark humour, which may not rest well with some who want only a dour tone to accent the cosmic gravity of Lovecraft’s vision. The setup is simple enough: A claims adjuster is in Innsmouth on exactly the wrong night. It’s also an homage to Roger Zelazny and his novel, A Night in the Lonesome October.

It moves along at a zippy 18 pages, depending where you find it. I’m reviewing the 2001 version from Stephen Jones’ 1994 anthology, Shadows Over Innsmouth. It wastes no time in quickly establishing that this is a story set in the Mythos, and the protagonist immediately has knowledge of the Elder Gods who will “wipe out all of the non-believers”, and cleanse the earth with ice and water. But you won’t be mired down in Mythos esoterica.

Gaiman’s descriptive language succeeds in quickly establishing a reader in a sinister setting without getting overbearing. You always have a clear sense of where everyone and everything is in any given room, and when different characters are talking.

Usually, the challenge for a writer working with the Cthulhu Mythos is to create a forbidding atmosphere filled with insanity, chaos and the cosmic unknown, and even Lovecraft has been known to pile it on a bit thick. Gaiman employs good, crisp strokes: All you need to know, but at the same time, you know you’re not seeing everything there is to see, yet.

This particular story is set after the 1980s and it keeps itself grounded well. You know the timeframe, but it’s not overwhelmed with pop culture references to make it feel dated.

Gaiman’s Innsmouth is a town that is still trying to keep its traditions. Gaiman suggests that Yuppies came in briefly in the 1980s, but have gone, and now there are many parts of the city that are abandoned and crumbling, with many residents living in trailer parks and mobile homes. Several familiar landmarks, like Marsh Street and the Church of Dagon, remain intact.

The inhabitants of Innsmouth are described early on as looking like actor Peter Lorre. “But then, most of the folk of Innsmouth look like Peter Lorre, including my landlady,” Gaiman writes. After a while, you’d think people would run out of interesting ways to describe the more loathsome of Innsmouth’s residents, but Gaiman keeps consistently creative and effective throughout the story.

Here, Gaiman presents us a weary protagonist who is not quite your typical Lovecraftian protagonist, but has just as dreadful a problem as many of Lovecraft’s hapless ‘heroes’.

“The end of the world is a strange concept. The world is always ending, and the ending is always being averted, by love or foolishness or just plain old dumb luck,” one character says, as the plot begins to unfold with the coming of the rising moon. We get to see which one it is as the story progresses, frequently with a tone of resigned fatalism.

Werewolf mythology comes into play in this story, and is used to fine and often humorous effect. Gaiman slips in a number of nods for die-hard Lovecraft fans, especially in the street names, and he adds a new figure and imagery that can linger with you.

Would this be a good first introductory story to the Cthulhu Mythos? This wouldn’t be my first choice because so few other stories have a similar tone or approach. It would give you a starting vocabulary but without much elaboration.

In the final appraisal, you don’t have to be a fan of the Cthulhu Mythos to enjoy this story. While it’s definitely tied to The Shadow Over Innsmouth, it’s self-contained-enough that you don’t need to read it. I wouldn’t say it’s an essential story that extends the mythology of Innsmouth, such that all future writers must take it into account, but it is a well-written one that leaves plenty of room for follow-ups.

Next time: A 1913 American story, “Fishhead”, by Irvin S. Cobb that was a direct influence on The Shadow Over Innsmouth.