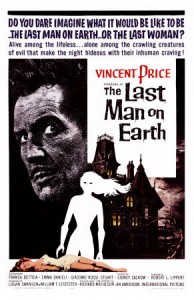 Welcome back to the Vault of Secrets, where, every other week, we’ll be unearthing a classic (or not-so-classic) vintage horror film for your delectation. Tonight’s movie is the first of a double feature of film adaptations of Richard Matheson’s seminal apocalyptic vampire novel, I Am Legend. It’s Vincent Price in The Last Man on Earth. The version I watched is the Legend Films DVD release. This time around, I watched the colourised version, but I’ve seen the original black-and-white version, before, and that’s what I’d recommend.
Ever since I first read I Am Legend, I’ve been interested in seeing a good film adaptation. At the time I’m writing this, the novel has been officially adapted into film three times, only one of which retained the original title. For my money, The Last Man on Earth is, without a doubt, the best of them.

The Last Man on Earth was almost a Hammer film. It would still have starred Vincent Price, but it would have been directed by Val Guest (Hammer’s Quatermass movies, The Abominable Snowman), under the title ‘Night Creatures’, a title Hammer retained and used for the U.S. release of their film, Captain Clegg. How different a movie that could have been. Unfortunately, the British Board of Censors said that the movie was too gruesome to show in Britain and, so, the Hammer production fell apart.

The screenplay for The Last Man on Earth was written by Richard Matheson, himself (under the pseudonym ‘Logan Swanson’), which might explain why, of all the versions, it stays closest to his original novel, in spite of changing (among other things) the protagonist’s name. It was rewritten by TV writer William Leicester and filmed in Rome as a joint Italian production, with directing credits shared between Ubaldo Ragona (not credited in the U.S. release) and Sidney Salkow (not credited in the Italian).
Matheson didn’t care much for the finished product. In his introduction to Denis Meikle’s book, Vincent Price: The Art of Fear, he lists the films that he’s worked on with Price, finishing by saying, “I do not include The Last Man on Earth, since I believe that Vincent was miscast in what turned out to be an inferior adaptation of my novel, I Am Legend.” While he may have been right about Price being miscast, he couldn’t have been more wrong about the quality of the adaptation, at least, compared to the film treatments that would come after it.

Price is certainly an odd choice to play the novel’s everyman protagonist, Robert Neville (which may be part of why they changed his name to ‘Dr. Robert Morgan’), but The Last Man on Earth is an otherwise-commendable production that’s years ahead of its time. Not only is it remarkably accurate to the source novel (and the only one of the three adaptations that keeps the threat vampires, instead of turning them into mutants), but there are also several scenes, particularly when the vampires are swarming Price’s fortified house, that prefigure George Romero’s classic, Night of the Living Dead, a film that, while not an official adaptation, is widely regarded as owing a significant debt to Matheson’s novel.

That’s it for tonight, but join us next time when I take a close look at the second (and worst) adaptation of I Am Legend, Charlton Heston in The Omega Man.

You can find The Last Man on Earth on Amazon.com