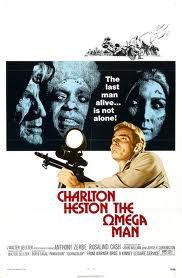 Welcome back to the Vault of Secrets, where, every other week, we’ll be unearthing a classic (or not-so-classic) vintage horror film for your delectation. Tonight, we’ll be taking a look at the second official adaptation of Richard Matheson’s apocalyptic vampire novel, I Am Legend: Charlton Heston in Boris Sagal’s The Omega Man. The version I watched was on Netflix Watch Instantly, but it’s also available on DVD.

Our purview here at the Vault of Secrets is fairly broad – from the dawn of cinema to no later than 1979 – but we’ll probably not be looking at very many movies from the 70s. There are a lot of reasons for this, not the least of which being that I don’t tend to like movies from the 70s as much as I do some earlier films (though there are certainly exceptions). Sadly, The Omega Man falls squarely in that category of movies I don’t particularly like. I know that there are a lot of people who really like The Omega Man and, to those people, I can only say that you’d probably better stop reading right now, because you and I are going to disagree.

I found The Omega Man pretty close to unwatchable, especially following on the heels of The Last Man on Earth. I’d be hard-pressed to put my finger on an exact reason why, except to say, “Everything.” While The Last Man on Earth felt ahead of its time, The Omega Man (which came out less than a decade later) feels hopelessly mired in its era. Aside from this film, Boris Sagal was principally a TV director and it shows in the finished product here, which could easily have been a TV movie.

While Charlton Heston may seem like a more appropriate Robert Neville than Vincent Price, at least on paper, and while they let him keep his name this time, Heston’s performance is all machismo and snappy one-liners compared to Price’s, which is in keeping with the film’s changed tone. Where The Last Man on Earth was emphatically a horror film, The Omega Man is 100% an action picture, complete with machine gun battles and a motorcycle chase that culminates in Heston jumping his bike over a flaming car.

The vampires from Matheson’s novel have become light-allergic, communal, living, albino, mutant luddites, who preach against technology and “the wheel”, while going around setting things on fire. Furthermore, Heston’s Robert Neville is only the last human for maybe half the film’s running time (I guess the other people he meets are technically infected and just haven’t turned into albino luddites, yet, but that hardly counts). While Matheson’s novel gets a credit here, The Omega Man really couldn’t be more different from its source material, or from the classy 1964 version. Even Romero’s Night of the Living Dead, from three years previous, had more in common with I Am Legend than this stinker.

That’s it for tonight’s installment of the Vault of Secrets. Be sure to join us next time, where we’ll be looking back to the 40s (where I’m a bit more at home), to tackle the first of a couple of Universal’s “monster rally” pictures.

The Omega Man is available from Amazon.com