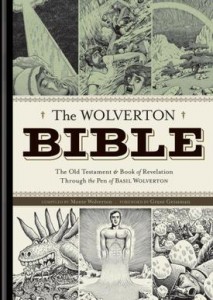 Once, Michelangelo gave us a crowded, colourful collection of burly, mostly-naked men called The Last Judgement. There doesn’t seem to be a whole lot to worry about, though – unless you’re one of that small group in the bottom of the painting being dumped over the side of a boat by a dark, Charon-like figure, or those looking up at a God they have forsaken. It is, of course, a fresco on the ceiling of the Sistine Chapel, one of the great treasures of Western art.

The “Michelangelo of Mad Magazine”, as Time once dubbed Basil Wolverton, gave us 18 small, intensely-detailed, black-and-white drawings for an illustrated history of that ur-apocalypse, the Apocalypse – the Book of Revelation. And there, in the horrified, foregrounded images of screaming men and women – dead or wishing they were dead, are those suffering the full helping of Seals and Horsemen. Mushroom clouds erupt over cities. Planes fall out of the sky, everywhere. Earthquakes and meteor showers and plagues are rife.

And though he did, in fact, appear in nine issues of Mad Magazine, as well as its rivals, Cracked and Plop, this was no cynical mercenary piece of work or ironical parody. Wolverton was seriously suggesting you’d better get right with God. 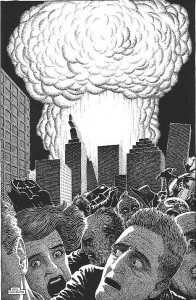 His grotesque, sometimes-slapstick caricatures were prized by collectors and bubblegum-card hoarders, and Wolverton never aspired to be a fine artist, never aped other artists, made no apologies for the secular art career he took up after deciding Vaudeville didn’t pay enough. While he regarded his work in The Wolverton Bible as his best, son Monte Wolverton notes, in the book’s commentary, he proudly inhabited the world of secular and sacred art. Tellingly, his favourite works were his cover of the September 1952 comic, Weird Tales of the Future, and Mutants, a view of blind and hunched survivors, crawling through the rubble left after the nuclear war he thought prophesised in Revelations. It was so extreme a work that his religious patron refused to publish it. Too strong for the flock.

Michelangelo, of course, had the patronage of the Pope and the Catholic Church. Wolverton’s religious patron, Herbert W. Armstrong, was on a decidedly lower rung of temporal wealth and authority. Armstrong was the founder of what would eventually become the Worldwide Church of God. Decidedly out of the mainstream, the Church was a collection of doctrines largely regarded as unnecessary or downright heretical by mainstream Christianity: a keeping of the Jewish sabbath and versions of their holy days and dietary laws, a rejection of the Holy Trinity, a belief that Man was destined to join a family of gods, and that the key to unlocking biblical prophecy was the fringe, 19th-century belief of British Israelism. When Armstrong died in 1986, the Church, like an exploding hand grenade, fragmented into several different sects. The Worldwide Church of God rethought some of their doctrines and aided Monte Wolverton, still a church member, and Fantagraphics Books in producing this book. 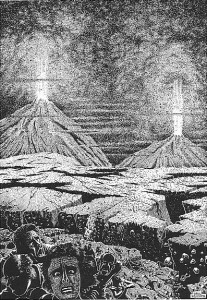 Born in 1909, Wolverton was raised by religiously devout Christians. But, in high school, he became an agnostic and remained so for about fourteen years. Encountering the radio broadcasts of Armstrong in the late 1930s, he was baptized a member in 1941. Armstrong thought highly of Wolverton’s energy and professionalism, and put him on the Church’s board. He also suggested, in 1942, that Wolverton leave comics to help the Church’s expanding publishing and broadcasting efforts. But this was a productive time for Wolverton. He was working on several comic books. In 1946, he achieved fame with the winning entry (as decided by the celebrity triumvirate of Boris Karloff, Frank Sinatra and Salvador Dali) in the Lena the Hyena contest sponsored by Al Capp’s Li’l Abner comic strip.

When he finally did produce for Armstrong, Wolverton went straight for one of the Bible’s most visual parts: the Book of Revelations and its End Times. Starting in 1952, he produced his depictions of the Apocalypse for the Church magazine, The Plain Truth, and others saw publication in Church booklets, all distributed for free. These drawings came complete with captions, usually quoting a pertinent biblical passage, written by Wolverton. The series starts out with a city getting nuked. Wolverton’s people, mouths aghast, are drawn with intense, fine, crosshatched ink drawings and appear as typical (well, as typical as Wolverton ever got) 1950s citizens of America. After a progression of the Four Horsemen, firestorms, famine, earthquakes, tsunamis, volcanoes, giant hailstones, and boils, those denizens of our world look less human and become Auschwitz-like lumps of flesh being bulldozed in Mass Burial or the Romeroesque zombies of Plague of the Enemies of Jerusalem and Mutants. It’s hard to argue with Monte Wolverton or Grant Geissman, in the book’s introduction, that these are some of the most powerful works of apocalyptic art ever imagined.

From the grand conclusion of Man’s days on Earth, Wolverton turned to a much more ambitious project: The Bible Story, an illustrated version of the Old Testament. He worked on it from 1952 through 1972, with installments being serially published after completion. Though originally conceived as mostly-large illustrations with captions, thus explaining the many pictures for Genesis, from the Creation through the Flood, the project eventually became more of an illustrated book, with much more text written by Wolverton. The man who created the “science fiction comic masterpiece stories”, “Brain-Bats of Venus” and “The Eye of Doom”, knew what would interest the kids who made up a large portion of the intended audience, knew their love of violence and drama. Indeed, some of the pictures were culled from the work at parental request when a second edition was published. 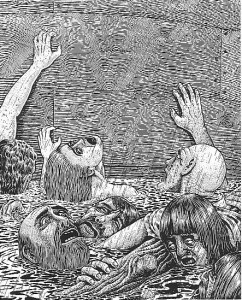 Of course, the account of the Flood offered another opportunity for Wolverton the Apocalyptist. Those people, their faces emphatically expressing derision and contempt for Noah the Ark-Builder, are then seen scratching the sides of the boat as the waters engulf the world. (Wolverton, in fact, depicts soo-to-be-drowned sinners in three illustrations.)

But there are other, more-personal apocalypses: the strangely-twisted, blurred figure of Lot’s wife becoming salt; Adam (who looks rather like Wolverton’s comic book character, Spacehawk); and Eve (who looks like a blonde, ’40s starlet), recoiling in horror at the blazing sword in the foreground, with only the wielding angel’s hand visible; an Egyptian mouth agape in revulsion at the frog in his cup; emaciated figures, menacing a gaunt woman cradling her child in a land cursed by God; red-hot irons nearing Samson’s eyes; the terrible packages that contain the body of a raped-and-murdered woman; the Amalekite king realising Samuel is not going to release him; dogs feasting on Jezebel; and the greedy devouring of something in a besieged Jerusalem.

A special note to Innsmouth Free Press readers: There are two depictions of Dagon, a merman-like figure that, with his bowl haircut, slash of a mouth, and heavy-lidded eyes, wouldn’t look out of place in Mad Magazine.

This is a well-produced book, marred only by a few mistakes in page references and the artwork sometimes being out of chronological order, for purposes of the layout. Any Wolverton fan, looking for an inexpensive version of these Bible illustrations, should pick this up. And there might also be those, like me, who saw The Bible Story the first time around in its original, unexpurgated glory but haven’t seen the horrible grandeur of Wolverton’s Revelation illustrations before.

You can find The Wolverton Bible on Amazon.com.