I’ve always had mixed feelings about H.P. Lovecraft, the pulp horror writer, whose grave I visited recently. He was a racist and his prose is sometimes as scary as his imagination. But talking to the security guard at Swan Point Cemetery helped me clarify my thoughts about the great pulp horror writer.

We heard the guard before we saw him.

“No pictures!” he called to Lizzy and me from further down the hill. I’d been walking toward the modest headstone, phone in hand. The red-haired guard walked toward us with a quick, wide gait. He explained that the cemetery was private and didn’t allow photographs of the monuments.

I put my phone back in my pocket. I’m ambivalent about images, anyway, so I didn’t feel robbed. There was a strange mix of objects on the grave – seashells, small stones, hand-written poems, and a key.

“Once the plot is clean, it stays clean for weeks,” the guard said. “And then someone puts something new on it and stuff starts to pile up.”

“I don’t know why people leave keys,” he said. “One person left a key and now everyone leaves keys.”

“What are those notes?”

Lizzy leaned over and looked at the crumpled paper held in place by a stone.

“That’s a strange thing to be carrying.” The guard nodded at Lizzy’s left hand, which, curled nonchalantly under her right hand, held a can of green beans.

Years ago, while I was reading systematically through all of Lovecraft’s stories, I also read the 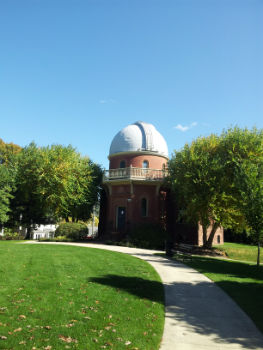 final volume of his Selected Letters. At the end of his life, Lovecraft was very poor and virtually every meal he mentioned eating came out of a can. In many cultures, it’s common to leave food on a grave and I thought a can of food would be most appropriate.

“We were going to leave it,” Lizzy said.

He said this as if he expected us to be disappointed that Lovecraft wouldn’t wake up that night and chow down.

Lizzy set the can on the grass next to one of the hand-written notes.

We spoke for a while longer and he told us more about his job and the visitors to the gravesite. Lovecraft’s grave was the most visited grave in all of beautiful Swan Point Cemetery, where governors and Civil War generals were buried.

On our walk back to downtown Providence, I wondered why that was.

I personally don’t look up to him as I do some writers. I look back on him as I look back on my younger self, admiring his fidelity to some vague artistic ideal completely separate from the market, his cosmic worldview, and his dogged desire to live as much as possible in his head. But obviously, not everyone visits his grave for the same reason I did.

I think part of it is his posthumous popularity – a common nerd fantasy. His fanbase is made up of writers, artists, horror aficionados, and misanthropes – “losers, no offense” as the guard termed us. We are people who feel some disconnect with the world, but still dream of adulation.

Not that Lovecraft’s fans are a cohesive mass. There’s something incredible about a writer who can appeal equally to black-clad metalheads, potheads, English majors, Stephen King, the French writer Michel Huoellebecq, and a mysterious German man – described by the guard – who flew in on Lovecraft’s birthday and stood by the grave in a three-piece suit for a half-hour before flying straight back.

Reading Lovecraft’s letters I was reminded of Adam Gopnik’s essay, “Van Gogh’s Ear,” which describes Van Gogh’s final months in an asylum and connects this to the incredible prices which Van Gogh’s paintings now fetch. That essay concludes by contrasting the difference between art collectors who bet huge sums of money on paintings they hope will appreciate and the artist who “bets his life.”

That’s my answer to why his grave is still visited. Lovecraft bet his life.

The security guard told us that the time you consider cat food as a viable food source is the time you put down your pen and get a job at a factory. That’s the way most of us think. Certainly, all the governors and generals buried in Swan Point would have been so practical. 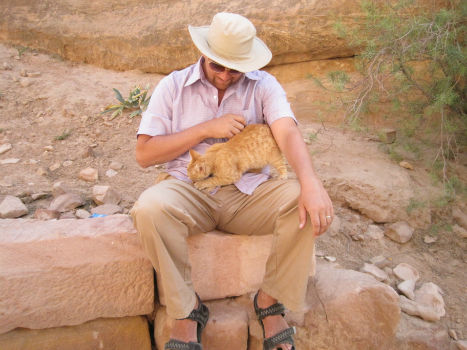 Bio: Hunter Welles is a freelance computer programmer and odd-jobber, who makes his home in Bemidji, Minnesota. He is the author of a novel, Solomon the Peacemaker. His favorite Lovecraft story is “At the Mountains of Madness.” You can find him at: http://www.hunterwelles.com, as well as on Facebook and Twitter.