[dropcap]T[/dropcap]he Gothic short story entitled “The Cask of Amontillado” (1846) is a perfect example of Poe’s art, as here are all the elements connected to the artistic principle of grotesque and arabesque. The grotesque element is the grotto that fits the setting of the story, a cold vault that carries a meaning linked to the freezing darkness of an abyss with its deformed and hideous depth, as it is also used as a damp catacomb. In the arabesque element is something odd, complicated or difficult to understand.

The short story expresses an enigmatical, mysterious and ritual inspiration that makes the reader analyze it carefully and in detail to fully understand the semantic importance within its difficult, symbolic plot. In that grotesque and arabesque context, the writer developed a mysterious style aimed at penetrating the environment of the plot. Being set in a gloomy vault, the story becomes cryptic by means of sentences and symbols with double meaning.

The narrative describes a planned revenge caused by an insult, and carried out with lucid and cold demoniac cruelty in the abyssal vaults of Montresor Palace, full of casks and piled human bones. The most brilliant aspect of the work is how Poe blends environment and psyche symbolically in a horrible story full of suspense and irony. The descent into the dark labyrinth underground is a descent into the hell of the soul, where all the horror of psychic delirium and death emerges. The short story, “A Descent into the Maelstrom” (1841), underlines the dramatic aspect of the fall into the abyss of the vortex as a form of psychological delirium, which devours Man lost in the unknown and prey to the chasm. The more you physically descend into the abyss, the more the darkness of the soul emerges.

Here you can see that perverse and unexplored area of the mind. The torch the characters hold in “The Cask of Amontillado” not only enlightens that dark place, but also expresses and reveals the dramatic events through its reddish light. We can find a similar description in “The Masque of the Red Death” (1842), where a scarlet light, coming from the blood-colored panes and caused by the fires of the tripods, irradiates the room walls with such a glare as to express an ill-omened message.

Poe often uses symbols as a means to go beyond the apparent limits of events, with the masterly intent to penetrate into the intangible sphere of psyche like a sharp blade. The red light of the torch acts as an adhesive, because it enlightens and unites in an unreal dimension the external space with the internal emotion of the soul in a meaningful chromatic expression. In Poe’s art, the grotesque and sarcastic penetration of environmental elements with psychological elements is frequent.

In fact Fortunato wears motley with a striped dress and a conical cap adorned with bells, as if he had to act as a fool, while the murderer wears a gruesome dress made up of a cloak and a mournful mask of black silk, which hides his face. From the very beginning, the narrator, who is the faded nobleman Montresor, clears up the reason for his grudge against the Italian man, ironically called “Fortunato,” whom he wants to murder in an atrocious way through a diabolic trick, which punishes with impunity. According to the narrator, it does not make sense to make up for a wrong if the enemy is given the possibility to defend himself. As a consequence, a revenge must be absolutely infallible, total, perfectly rational and pitiless, without the least possibility for human or technical mistake. Crime, in the degenerate mind of the protagonist, has its justification in hate and cruelty, particularly when the wicked deed gives vent to the pleasure of revenge.

The short story, “Hop Frog,” is also characterized by such perfect elements of murder as revenge deeds for being wronged. Here, the main character manages to deceive and skillfully kill the tyrants who enslaved him. 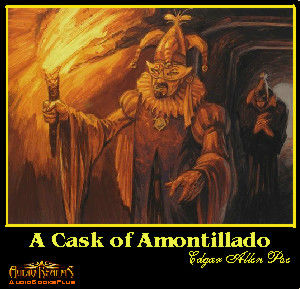 In “The Cask of Amontillado,” one evening, during a Carnival party, Montresor shrewdly persuades the drunk Fortunato to go to the variegated vault of the Palace to check if he has really bought a rare Spanish wine, called “Amontillado.” Fortunato is skeptical about the genuineness of the wine and wants to check its quality. He also wants to show his expertise. The narrator knows his victim’s personality very well and takes advantage of it to carry out his diabolic plan of revenge.

Obviously, Montresor tries not to make Fortunato suspicious. In fact, he pretends to smile, invites him repeatedly to put off the wine test, showing also a certain concern for his cough. But in the narrative, the narrator’s “smile” is a sarcastic, devilish grin aimed at filling the murderer’s black heart with joy, while thinking of the crime to be committed like an immolation. The Palace is completely deserted because the servants took advantage of Montresor’s temporary absence to go out and enjoy a day off. * In order to hide any suspect, the murderer offers him his arm and they continue their route through those damp and dark walls of the vault. Along their way, Montresor uncorks some bottles of wine, which are lying in a row upon a mould; first, he offers his victim a drink of Medoc and then of a mocking De Grave** in order to get him drunker and drunker.

The light and watery bones of the dead seem to melt in the white nitre of the damp walls, so that those rocky sides, whence you can see skeletons coming out, foreshadow Fortunato’s death. On the other hand, the wines aged among the bones of that mould seem to melt drunkenness with death, if we consider Fortunato’s inebriation. We can find a possible confirmation of such an association, in “cultures where shamanic rituals, human skeletons or those human figures with visible bone structure symbolize the experience of psychic breakdown that people have during a “trance.”***

While they are looking for “The Cask of Amontillado” in the extensive and labyrinthine vault, as if it were a hidden treasure, Fortunato pretends to forget what the arms of the noble and faded family are like and an emotionless Montresor describes their symbolically predictive image of a huge golden foot in a blue field; the foot crushes a rampant snake, whose fangs are imbedded in the heel.

The motto on the arms is the Latin phrase, “Nemo me impune lacessit,” meaning, “Nobody offended me with impunity.” During the description, we feel the sad prediction of what’s going to happen. It is as if the tormentor had coldly and in an enquiring way pronounced an irreversible death sentence for his hated enemy.

Along the gloomy and huge corridors, Fortunato reveals his own Masonic membership with a 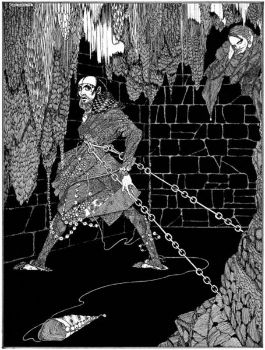 grotesque gesture. The narrator also confesses to being a member of the secret society and shows a trowel, a typical tool in Masonic iconography,**** but, once more, Fortunato mocks the discovery and withdraws, as if he had seen a weapon. Arrived at the remote and hidden recesses of the catacomb, Montresor deceives Fortunato in the crypt where the famous cask of Amontillado is supposed to be and quickly fetters him into a niche. In spite of Fortunato’s supplications and ravings, Montresor walls him up with sadism and scorn, causing his rival to die in an atrocious way.

From the beginning, the narrator mentions immolation, a sort of sacrifice aimed at the physical elimination of the enemy. What is not clear is the reason why Montresor does not only murder Fortunato, but also decides to sacrifice him. We know the reason why he wants to kill the Italian man, but we do not know why he commits that kind of murder.

By a careful analysis of the story, we find different symbolic elements, such as the trowel and the building of a wall, which recall a sort of Masonic ritual. E.g., the cave is the typical setting for rituals and a catacomb is a suitable place, as well. According to the Christian point of view, the underground world of the cave is compared to Hell, where the snake, that is the Devil, is its sticky keeper.

The story permits two interpretations, as there is a fusion between Christian mythology and Masonic symbolism. In Masonic symbolism, the “trowel, used to ‘wall up,’ is needed as a seal on the silence towards strangers (“the uninitiated”) to defend the “arcane discipline” (that is, “the secret hidden in an ark”) deriving from the closely lived experience of symbols and rituals.”***** According to such an interpretation, it would seem the narrator wanted to revenge a suffered insult by means of a Masonic ritual, which would immolate a bad member of Masonry.

A further proof is the fact that in “Masonic symbolism, the still-shapeless ‘unrefined stone’ represents the level of apprentice.”****** No wonder it is just on a rough granite stone that Fortunato is chained. From these associations, we can deduce that the mysterious “treasure” coming from the French term ‘Montresor,’ meaning “my treasure,” is probably the unknown knowledge of Masonry.

Fortunato, symbolically represented in the coat of arms as the huge golden foot,******* crushed the snake Montresor with insults, but he also got to know the obscure Masonic wisdom justly represented by the gold.********

* Though an absence calculated by the narrator himself.

** Notice the meaning of the English words, “The grave.”

**** Evidence of the importance of the trowel can be found on the 18th of September 1793, when George Washington laid the first stone of the Capitol of the United States of America in the Masonic style.

******* As Fortunato is Italian, the size of the foot could refer to Italy, which looks like a huge boot.

******** The precious metal could also point out the secret wisdom. On this purpose please see Enciclopedia dei Simboli, p. 352.