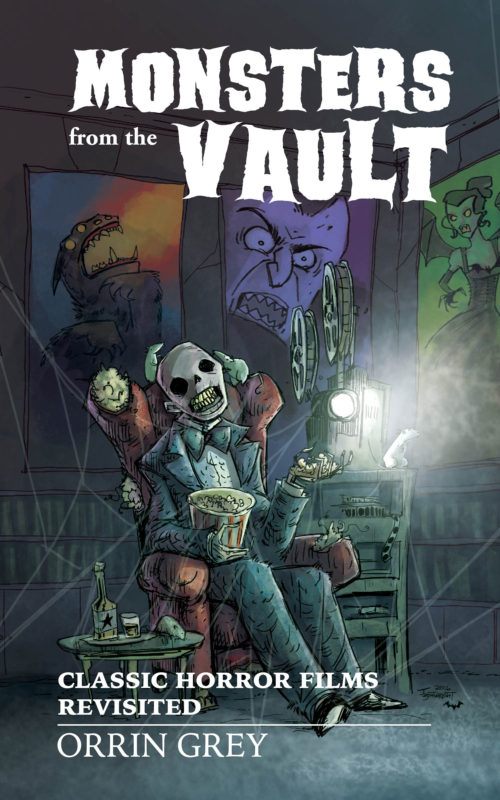 Author, skeleton, and monster expert Orrin Grey takes you on a journey of vintage horror cinema.

Praise for Monsters from the Vault

“Orrin Grey’s Monsters from the Vault is a delight.  Grey takes the reader on a film-by-film journey trough some of the lesser-known horror films of the middle decades of the twentieth century, offering incisive and witty analysis of them along the way.  Possessed of an apparently encyclopedic knowledge of these films, Grey points out connections among their directors, writers, actors, and production crews.  The result is a book that can be enjoyed both for its discussions of individual films and for its overview of horror film during this period.  Put this one on the shelf next to Danse Macabre and The Outer Limits Companion–even better, keep it on your desk, so it’s close at hand.” – John Langan, author of The Fisherman.

Welcome back to the Vault of Secrets, where acclaimed author, skeleton, and monster expert Orrin Grey will be disinterring a bunch of classic (or not-so-classic) vintage horror films for your delectation. Revisiting films from the earliest of the talkies (shot in two-strip Technicolor!) to Bert I. Gordon’s 1976 “masterpiece” The Food of the Gods, this volume collects more than four years of Grey’s popular Vault of Secrets column on vintage horror cinema, featuring everything from mad scientists to mole people, giant bugs to devil dolls, and more. Thrills, chills, and, of course, plenty of monsters await you within these pages. So dim the lights, grab some popcorn, and get ready for our feature presentation…