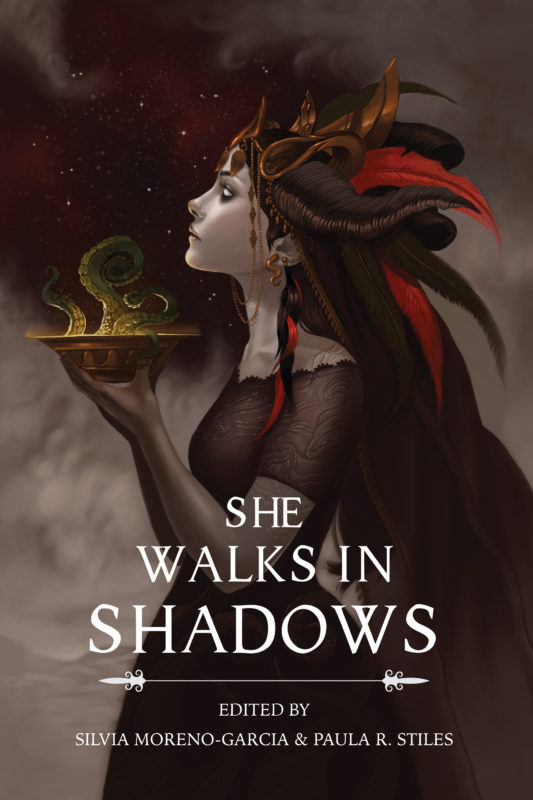 An anthology of women and Lovecraft’s Mythos. Winner of the World Fantasy Award in the anthology category.

More info, including the TOC and sample stories, below.

They emerge from the shadows, to claim the night ….

Women from around the world delve into Lovecraftian depths, penning and illustrating a variety of Weird horrors. The pale and secretive Lavinia wanders through the woods, Asenath is a precocious teenager with an attitude, and the Ancient Egyptian pharaoh Nitocris has found a new body in distant America. And do you have time to hear a word from our beloved mother Shub-Niggurath?

Defiant, destructive, terrifying, and harrowing, the women in She Walks in Shadows are monsters and mothers, heroes and devourers. Observe them in all their glory. Iä! Iä!

“Violet is the Color of Your Energy” by Nadia Bulkin reprinted in Year’s Best Weird Fiction, Vol. 3

“The Thing in the Cheerleading Squad” by Molly Tanzer reprinted in Transcendent: The Year’s Best Transgender Speculative Fiction

“She Walks in Shadows showcase a considerable range of talented writers creating work that is vivid, unsettling, and resonant. If, as Gary Wolfe has suggested, an anthology can be thought of as an argument, then this book makes a strong case for its contributors being at the forefront of new, exciting Lovecraftian fiction.” – John Langan, Locus

“The stories have diverse characters in diverse situations, but they share that common Lovecraftian atmosphere of dread and wrongness.” – Smart Bitches, Trashy Books

“Fans of horror, particularly those Lovecraft afficianados, will respond to She Walks In Shadows’ deliciously existential darkness” – SQ Mag

Prime Books has published an American edition of this anthology under the title Cthulhu’s Daughters. Same book, different edition and cover.

“Turn Out the Light” by Penelope Love

“The Thing on the Cheerleading Squad” by Molly Tanzer

She Walks in Shadows Reviews