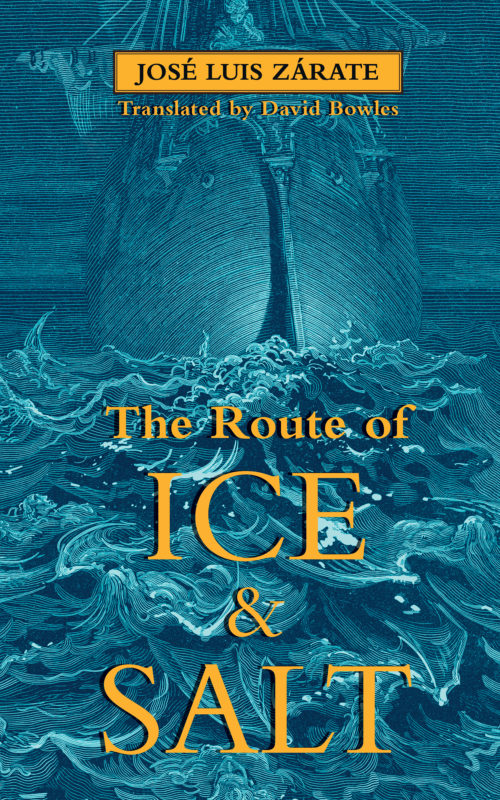 A reimagining of Dracula’s voyage to England, filled with Gothic imagery and queer desire.

It’s an ordinary assignment, nothing more. The cargo? Fifty boxes filled with Transylvanian soil. The route? From Varna to Whitby. The Demeter has made many trips like this. The captain has handled dozens of crews.

He dreams familiar dreams: to taste the salt on the skin of his men, to run his hands across their chests. He longs for the warmth of a lover he cannot have, fantasizes about flesh and frenzied embraces. All this he’s done before, it’s routine, a constant, like the tides.

The cult vampire novella by Mexican author José Luis Zárate is available for the first time in English. Translated by David Bowles and with an accompanying essay by noted horror author Poppy Z. Brite, it reveals an unknown corner of Latin American literature.

José Luis Zárate is a key figure of the Mexican fantastic literature of the 1980s. Together with Gerardo Porcayo, he created the first online Mexican science fiction magazine, La Langosta se ha Posado, in 1992. He is a winner of the Premio Internacional de Novela de Ciencia Ficción y Fantasía MECyF and Premio Kalpa. Zárate is best-known for a trilogy of short novels centred around key popular culture figures – Dracula, Superman and El Santo. He studied Linguistics and Literature and now teaches a course on fantastic literature in his native city of Puebla.

David Bowles is a Mexican-American author and translator from south Texas, where he teaches at the University of Texas Río Grande Valley. He has written several books, most notably They Call Me Güero: A Border Kid’s Poems (Tomás Rivera Mexican American Children’s Book Award, Claudia Lewis Award for Excellence in Poetry, Pura Belpré Honor Book, Walter Dean Myers Honor Book). In 2017, Bowles was inducted into the Texas Institute of Letters.

Poppy Z. Brite is the pen name of author Billy Martin, who lives in New Orleans with his husband. His novels include Lost Souls, Exquisite Corpse, and Liquor. He is currently working on a nonfiction book about religion and spirituality in the work of Stephen King.

Endorsements
"The combination of sensuality and slipping reality contains shades of Strieber’s The Hunger and just a dash of Moby-Dick."
– Tor Nightfire
"Bowles’ poetic translation captures a period sense of style without seeming old fashioned."
– Nightmare Magazine
"A necessary and engaging addition not only to the always popular subset of Dracula-adjacent tales such as Dracul by Dacre Stoker and J. D. Barker, but also to the growing pantheon of retellings of horror classics from a marginalized perspective such as Victor LaValle’s The Ballad of Black Tom.”
– Library Journal
Look Inside

The Route of Ice and Salt Reviews