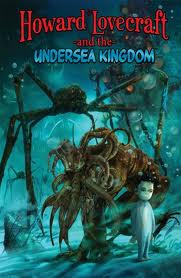 I have a secret. It’s kind of a ridiculous secret, but I’m going to share it with you, anyway, and I hope you won’t laugh at me too much. A while ago, I heard about a delightful comic called “Howard Lovecraft and the Undersea Kingdom”, but, for some reason, my brain decided that it was actually called “20,000 Lovecrafts Under the Sea”. In the time it took for me to get my hands on a copy of the actual story, I had already imagined one of my own: Howard Philips Lovecraft as a sort of Gothic Jacques Cousteau, who stumbled upon R’lyeh while traveling in the Nautilus. Noting that the slumbering, madness-inducing form of Cthulhu was beginning to develop a strange kind of non-Euclidean rash from toxic chemicals that had been dumped into the waters nearby, and worrying that pollution might cause Cthulhu to wake up before the stars were right, Lovecraft now travels the world and promotes marine conservation when he’s not having bare knuckle fights with giant kraken.

The problem with this bizarre flight of fancy (aside from the fact that it makes it incredibly obvious that I have never actually read 20,000 Leagues Under the Sea) is that stories in any format are best experienced on an empty brain. Books, comics, movies – even 3D movies – can’t compete with your imagination because they’re bound by budget constraints, by the shackles of words, by the limitations of page size. It’s not a fair fight and I know it, so it was with a heavy heart that I picked up Howard Lovecraft and the Undersea Kingdom, having already condemned it to be a pallid comparison to the kraken-boxing Lovecraft adventures of my imagination.

I am genuinely surprised to report that I was entirely wrong. Howard Lovecraft and the Undersea Kingdom is absolutely nothing like I’d imagined in all the best ways. When his family is kidnapped and the Necronomicon is set as the ransom price, a very young Howard Lovecraft must save them – and himself – from certain doom with the help of his father, Cthulhu and a bumbling police officer. In this story, Cthulhu is the Alfred to Lovecraft’s Bruce Wayne – he helps and protects the boy Lovecraft from harm with an almost motherly concern.

Comics about Lovecraft as a boy often seem to try to stick adult Lovecraft in a child’s body. The juxtaposition is funny for a short time, but eventually becomes tedious. People often write Lovecraft – even young Lovecraft – as an elitist, jaded, and generally snobbish chap, but in reading the letters Lovecraft wrote to his friends, you can hear a sense of wonder, sometimes, that is child-like in its innocence and unabashed enthusiasm. The Lovecraft of Howard Lovecraft and the Undersea Kingdom draws on that part of his character to make a believable, likable young boy that one can imagine growing up into the H.P. Lovecraft we all know and love.

I wasn’t particularly fond of the cover art – Lovecraft seems a bit Muppet-like around the mouth and Cthulhu looks like a rhinoceros infected with Las Plagas, but the interior art is fantastic. Simple and clean, it grabs your eyes and pulls them along the page, leaving you hungry for more. I absolutely love the way Cthulhu is drawn – tough and worn and battle-hardened. I don’t think I’ve ever seen better-looking fish people, which is possibly the weirdest compliment I have ever given anyone in my entire life.

I’m rather sad to concede that Howard Lovecraft and the Undersea Kingdom might actually be even better than my imaginary 20,000 Lovecrafts Under the Sea (although I maintain that I have the better title), even though it doesn’t have any giant kraken fights.

Howard Lovecraft and the Undersea Kingdom can be found at Amazon.com