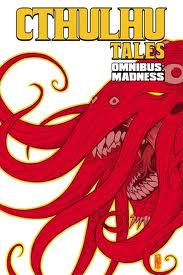 Lovecraftian fiction is difficult to pull off. Anyone can take a story and throw in an Elder God, a few references to Randolph Carter or Herbert West, and a couple of IA! IA!’s for good measure, but it takes a true master to correctly capture the subtleties of Lovecraft’s paranoia, phobias and strange personality traits that permeated everything he ever wrote.

Cthulhu Tales Omnibus: Madness is chockful of proper Lovecraftian fiction. Lovecraft himself would be proud of this compilation, although there may be a few here he would need explained to him. Cthulhu and Shub-Niggurath fighting over pop vs. rock in “Comeback Tour” might be a difficult argument for someone who has missed the past few decades of music evolution to understand. Also, since the whole being-dead thing has spared him from the horrors of reality TV, Lovecraft would probably not comprehend the humour of “Cthulhu House”, a mash-up of eldritch horror and shows like Big Brother, wherein young adults engage in otherworldly challenges and talk about each other behind their backs.

“Chocolate Sampler Copywriter”, in which the author postulates what sort of descriptions Lovecraft may have written for chocolate bonbons, had he been hired to invent the instruction manual for boxes of chocolates, would probably be Lovecraft’s favourite. Lovecraft was, like me, a huge fan of food in general and chocolate in particular. My only complaint about this piece – and it is a large, bitter, angry complaint – is that it didn’t come with any actual chocolates. You can’t just wave pictures of eldritch chocolate goodies around and then not actually give someone any chocolates. Even Lovecraft couldn’t conceive of that kind of cruelty.

“Arkham: SVU” would fly right over Lovecraft’s head, but as a longtime fan of Law & Order, I absolutely adored it. It’s such a hilarious and accurate spoof that I was hearing the opening monologue of the comic in Steven Zirnkilton’s [http://www.imdb.com/name/nm0007064/] voice, and every time the scene changed in the story, that infamous Law & Order DOINK DOINK [http://www.youtube.com/watch?v=D9u9kimBDTc] reverberated reflexively through my brain.

My favourite story by far, though, was “A Whistle for the Deep”. The trope of an adopted child turning out to be evil is worn and tired, maybe more so when you, yourself, are adopted. Despite focusing on a couple who adopts a baby Deep One, “A Whistle for the Deep” manages to lovingly humanise all of its characters, even – and perhaps especially – the ones who are not quite human, themselves. Beautifully drawn, with art as gentle and patient as the story itself, it catches you off-guard and then sneaks into your heart, changing you in small and quiet ways, opening your eyes to wonder and enchantment.

Not everything was fantastic – although Steve Niles was a big name attached to this book, I found his story, “The Eyes of Madness”, to be a bit lacking. While not exactly bad, it’s definitely not at the level I’ve come to expect from him; nor does it meet the bar set by many of the other wonderful stories.

The art is almost uniformly amazing. I am beginning to develop a deep love for Drew Rausch’s art – it is simultaneously complex and simple and deliciously ambiguous. It is the perfect accompaniment to tales of eldritch horror – you can feel the chaos crawling off the page and sinking its thirsty tentacles into your helpless brain. 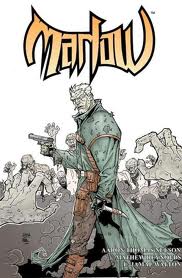 I love the art in Marlow, too, but for different reasons: It consists of crisp, violently-clear profiles; punchy action sequences; sharp black-and-white contrast that makes fights swift and brutal. I envy hard lines. I feel like they’re a sign of confidence when people can just draw thick, bold lines on a page. It requires a kind of self-assuredness that I lack in my art – I hide behind my shading, never wanting to commit to the kind of finality that is so present in the art of Marlow.

The writing is also bold. No vagueness, no shades of grey to be found in this storyline. It’s a one-two punch. Quick and dirty. There’s no time to react with Marlow – it opens with a swift strike to your soft, meaty parts and doesn’t stop until you’re on the floor. It doesn’t give you time to look for plotholes. You’ve got to plow forward – there’s no other option than to roll with the story because you know, if you pause for even half a second, it’s going to start throwing punches again.

A failed nanotech experiment, Marlow, our grizzled hero, was supposed to be made into a super soldier, but instead, was turned into a zombie. Now he is a mercenary, working for the very company responsible for his current predicament, cleaning up their problems in exchange for drugs that will stave off the progress of the nanotech disease, allowing him to remain human for a time. Combined with a crack team of butt-kickers, he blows stuff up and fights bad guys in a way that would make John McClane proud.

Marlow has some ridiculous things in it. It’s chockful of clichés: Every woman is super-sexy and logic sometimes takes a holiday, but it works. In the same way that being named ‘Pussy Galore’, or having a mouth made out of metal, doesn’t seem completely bizarre in the context of James Bond, a saucy-vixen mercenary and a badass bible smuggler are believable in the world of Marlow.

Most importantly, Marlow is fun. Pulpy and vicious and entertaining. It’s an action movie in comic book form.