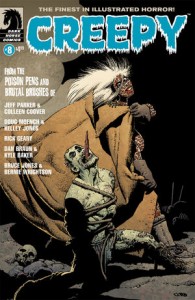 I sometimes think it’s a bit unfair that sports fans get to dress up in their team’s colours and eat snacks and watch games together. Comics fans don’t get anything like that unless they go to conventions, and that tends to be prohibitively expensive, whereas, slapping greasepaint on your face, eating hot dogs and talking smack about the other team are fairly cheap. I’m not suggesting that we show up at our comics shop with our faces painted like our favourite characters and get into arguments with supporters of rival characters (although I can’t say I would be entirely opposed to that idea), but there needs to be some sort of loud, colourful, cheap, and frequent celebration of comics.

I hadn’t known how much I wanted this feeling of being a part of something until I read Creepy. It’s more than a comic – it’s a banner for all fans of comics and horror to gather under together. There are people like you around, people who like the things you like, people who tell the kind of stories you’re dying to hear, and those people are reading, writing and making art for Creepy.

Horror is a very personal thing. Our fears are very specific to us as individuals: Something that I find absolutely terrifying another person will find completely silly. How, then, do you craft a properly frightening story? Creepy #8 is proof that they’ve got the algorithm, the recipe or maybe even some kind of twisted philosopher’s stone that turns regular stories into deliciously twisted nightmares. I consider myself fairly hard to please when it comes to horror, so there’s no other explanation – there has to be some secret formula that they’ve worked out, because otherwise, it is just not possible that one compilation could be this good.

The issue starts off with “Nineteen”, where we’re introduced to a man who goes to a brothel and gets a little more service than he’d been expecting. This story is so very soft and subtle, the ending so cleverly executed, that it’s poison hidden in the sweetest honey; it’s a dagger sheathed in the smoothest silk.

From there, we’re shown what might have happened if H.P. Lovecraft’s dreams were premonitions in “The Lurking Fate That Came to Lovecraft Part 1”. I love reading how people write from Lovecraft’s perspective in a way that actually sounds as if the man himself could have written it. I sometimes wish I could reanimate him and show him a collection of comics that feature him as a protagonist, just to see what he’d think. The art in this story is fantastic – I think it’s the most Lovecrafty Lovecraft I’ve seen yet. He actually looks like a person, and not a caricature, which is refreshing.

“The Mausoleum” is really wonderful. So beautifully intricate, so overwhelming, that it’s almost asphyxiating – the quiet humbleness of the story is a great match for the clean simplicity of its artwork. The most horrific thing about this story is that it’s the most believable of them all – how easy it is to put yourself into the shoes of its everyman protagonist, to understand exactly what drives him, even as you wish he’d make different choices.

If I wake up one night soon with nightmares, it’s going to be because of “Jenifer”. Following a strange girl who is rescued by a family man, this story starts out swinging and doesn’t ever stop. Visceral and disturbing, it is hard to believe that this was simply written and drawn. It seems more likely that the writer and artist took everything everyone has ever been afraid of, simmered it for a week, and then poured that pure, refined horror onto the pages and watched the story unfold from the reduction of our deepest, darkest fears.

There’s also “Loathsome Lore”, a collection of miscellaneous horror tidbits. Can I say that I find this adorable? It’s as if I’m at some kind of school for horror nerds and this is the history lesson, and I mean that in the nicest way possible. If your grandfather were big into horror and he wanted to pass that along to you, this is how he’d be telling you stuff.

I love Creepy. I love everything it stands for. I love that the people who are working behind it seem to love what they do and to want other people to love it, too. I think that’s wonderful. I think there need to be more things like this, more things that are made to include, to create a sense of community.

In retrospect, I think I should be suggesting that we go to comics stores with our faces painted like our favourite characters. That sounds like fun. We should do it.