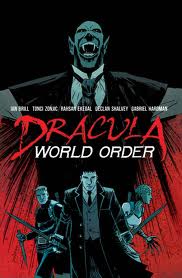 I’ll say one thing for vampires: They’re certainly a busy bunch. They populate every possible fictional avenue, worming their way into urban legends for good measure. There’s hardly a space real or imaginary that has never had a fang in it at one point or another. Their abilities, traits and physical characteristics are as varied as the backgrounds from which they come – vampires evolve as quickly as bacteria. Some can turn into bats or mist; others are stuck in one form. Some are unbelievably attractive, while others are grotesque. Some are killed by sunlight; others merely find it uncomfortable.

It’s exactly this adaptability that makes it so easy for vampires to sneak into our stories and art. When you hear about a story featuring zombies, you can probably figure out most of the basics just by virtue of the fact that it’s a story with zombies. Like most other monsters, zombies have concrete characteristics that, while they may sometimes be tweaked here and there, are rarely deviated from. Vampires aren’t so predictable, so, when I heard that Ian Brill, who also worked on the highly acclaimed and very awesome Darkwing Duck series, was independently putting out a series called “Dracula World Order“, I had no idea what to expect.

It’s good. It’s very good. Dracula’s son, Alexandru, rebels against him. You get a sense that, while he also may have some very good reasons for trying to overthrow his dad, his undead heart is full of the kind of ennui that children of very rich and powerful parents tend to develop that drives them to make room for themselves in the world – sometimes, by doing things like taking over aspects of their parents’ business, sometimes, by darker means. Alexandru is trying to do both.

Drawing on our society’s current frustration with the often-brutally-unequal hierarchy in big business, Dracula World Order creates a world where Dracula sits at the top of a vast pyramid of corporations, staffing the highest positions in each with his minions, who oppress everyone below them. This is by far a better explanation than reality – it’s a much kinder idea that it’s evil monsters, not fellow human beings, who profit from and work hard to ensure the continuation of such an unfair system.

Seeking vengeance against his father, Alexandru rescues two of his captives – a vampire hunter and a snake woman – and offers them a chance to fight Dracula with him. It’s Star Wars meets Hellboy, if Hellboy or Luke were cold and inhuman and unflinchingly eager to sacrifice others to achieve their goals.

One of the things that really impress me about this story is that no matter how much you might sympathise with certain parts of his tale, you can’t deny that Alexandru is kind of a jerk, and you definitely can’t trust him. I’m tired of friendly vampires. I’m sure that some of them are quite nice, but, at the end of the day, they drink blood – usually, human blood. The idea that we can take vampires at their word, that we can believe in the morals and virtues they claim to have enough to trust them not to hurt us, is an incredibly stupid one. You can bet that if chocolates were sentient, I’d tell them I only ate carob. Once I had their trust, I’d convince them to jump right into my mouth of their own accord, a deliciously vicious massacre.

Dracula World Order has sunk its fangs into me and now I am in its sway. I’ll be following it for certain, although with trepidation. Its opening has set a high standard for storytelling – can this be maintained throughout an entire series? I hope that Alexandru remains dangerous, that we are never allowed to forget that he is our predator, that he never forgets that we are all his prey. The most frightening thing about this issue is the knowledge that it would be so easy for future installments to be disappointing. For now, I hope my faith that Dracula World Order will continue to impress won’t prove as misguided as faith in vampires’ promises that their morals will prevent them from drinking my blood.

Find this comics book at: http://www.comixology.com/Dracula-World-Order-The-Beginning/digital-comic/DIG001539