[dropcap]T[/dropcap]oday, I’m reading Itty Bitty Hellboy. Actually, I’m reading it to my two-year-old daughter because she has decided that it is hers.

Writing established characters as children is always a tricky sort of thing. It’s hard to stay faithful to the source material while simultaneously making a story that is coherent and funny. Hellboy isn’t exactly a child-friendly universe, either – there’s really no way to make Nazis cute (and trying to do so is at the top of the list of things you should never, never try). Really, I have to give a whole pile of credit to Art Baltazar and Franco for even trying to make this comic.

Itty Bitty Hellboy reads like a cross between Peanuts and Calvin and Hobbes. It’s sweet, but never quite reaches the level of clever that it would need in order to be a continuing series. Thankfully, this is only a five-issue miniseries, because there are really only so many times you can make a joke about someone else wearing Roger’s underpants before it gets rather old. The artwork is absolutely bang-on – it is just exactly the right amount of whimsical to make the whole thing work. I’m a bit sad that they’ve painted Liz as sort of a bookish type, perhaps because I’ve been catching up on BPRD: Hell on Earth recently, where she starts out living in a trailer park and handing out hardcore redneck beatdowns to supernatural beasties, or perhaps just because the Hellboy universe is pretty great at making women be characters rather than stereotypes, and it feels like a major step backwards to suddenly relegate the tough-as-nails protagonist we know and love to a research assistant.

I’m decidedly undecided about Itty Bitty Hellboy. On the one hand, the art is really great, and 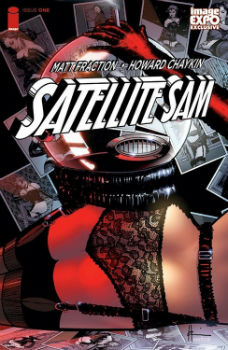 the character ideas are so very hilarious and adorable (Lobster Johnson is there, with his friend Lobster Smith, who is actually a lobster). On the other, the writing is somewhat bland and I’m sad about the portrayal of Liz. At the end of the day, though, my daughter loves it (I think I probably have the only two-year-old in the city who can recognize Abe Sapian) and it’s teaching her to read important words like “stop” and “AAHHH,” and maybe that’s enough. Maybe I’m just looking at it through the wrong lens.

I’ve been avoiding writing about Satellite Sam for a while now because I have nothing good to say about it. The story is convoluted and not at all compelling – I can’t bring myself to care about any of the characters. It starts out with a bunch of pictures of lingerie-clad ladies, as though it knows that it has no substance and is banking that your hopes that you’ll see more boudoir photos will sail you through the rest of the pages. The characters are cardboard cutouts from the stereotype factory and, although there is a scandalous mystery surrounding one of them who died in an intriguing fashion, I really can’t work up the effort to be interested in it.

I’d really like to say more about it, but the problem with Satellite Sam is that it is a black hole of boring. All of my feelings and emotions and motivation to write about it got sucked into its event horizon of dullness. It’s trying so hard to be pulp and it’s managing to fail in a way that is not tragic-but-uninteresting, which is remarkable in and of itself. I just don’t care about any of it. I can’t even get the motivation together to be snarky about it. Slogging through Satellite Sam has made me understand that it is possible to feel harried and burnt out by reading comics.