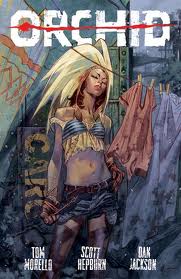 When I am Queen, I’m going to make a decree that if you have one artistic talent you’re known and well-respected for, when you decide to try your hand at a different medium, your first attempt needs to stink. I’m not asking for it to be entirely awful, but flawed enough that the rest of us don’t feel completely outclassed.

Tom Morello is going to be the first one in my dungeon. In the world of artistic talent, he’s clearly been armed with a grenade launcher while the rest of us are trying to figure out how to fight with table knives. He is an insanely excellent guitar player: He was ranked 26th in Rolling Stone’s list of the 100 Greatest Guitarists of All Time. If you think that perhaps he’s just another egomaniacal scumbag, he is also the co-founder of Axis of Justice, a non-profit organization that fights for social justice. The guy doesn’t even have the decency to give us some kind of horrible character flaw. If all that weren’t bad enough, he went and wrote a fantastic comic, too, just to rub his awesomeness in our faces a little bit more.

Set in the kind of post-apocalyptic wasteland we’ve all been warned would happen if we didn’t smarten up about how we treat our planet, with the addition of monstrous mutated animals, Orchid is a story about a hero who rises up to start a rebellion, to save people from a life of pain, torment and slavery.

Orchid is smart and strong and tough because that’s how she is – that’s how she has to be. She isn’t A Strong Female Protagonist. She is herself. I wish more authors who wanted to write powerful female characters would write them like this, like actual people and not some kind of cardboard cut-out. I am so excited to be writing this right now, to be telling you that this, this right here, this is a really good depiction of a lady in a comic. I don’t often get to do that.

What’s really great is that, even though Orchid is joined by a male protagonist named ‘Simon,’ there isn’t ever a damsel-in-distress thing and he’s not written to be weak so that she can look strong. They’re both very different – Simon seems like a conventionally educated fellow, while Orchid is clearly from the wrong side of the tracks – but both are equally clever and strong, albeit in totally dissimilar ways. I can’t say how much I appreciate the amount of care that has been taken to show that both characters have the same amount of merit, that their different approaches have an equal amount of advantages and disadvantages.

You can tell that there is a point being made in Orchid, that there are messages being given to you about the world you are living in right now, but they aren’t ever hamhanded and they never take away from Orchid as a character. As heavy as the metaphor gets in Orchid, it never devolves into the after-school-special kind of overly moralized, watered-down-for-mass-consumption garbage that we are so often handed when someone is trying to use a story as a vehicle for their viewpoints. Orchid should be required reading for anyone who has an opinion and wants to work on comics.

The art is great. You can almost smell the desperation and decay of the wasteland the characters call home. There are some really amazing panels that show how the world we know has crumbled and is slowly disintegrating, while this new world sprouts up in the spaces around and between like so many dandelions.

My one complaint – and it’s fairly minor – is that the narrative parts of the story are rather weak in comparison with the rest. I wish that either the narration was a bit less dry, or that the story was longer and more comprehensive so as not to need narration at all. There aren’t many narrative interludes, though – they seem to evaporate rather quickly – so it’s hardly a complaint at all.

Orchid is setting itself up to be an amazing, epic tale full of characters that you feel as if you already know better than any of your coworkers and half of your friends. I can’t help but recommend it.