Rob Liefeld is always used as the poster boy for what is wrong with comics. Sure, there are countless other people out there who are 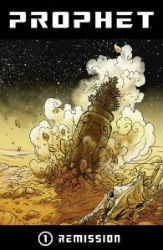 doing it wrong, but, like some tragic Greek hero, he has taken on his shoulders the entire weight of our ire at all comics that have stunningly vapid stories – and art that shows an impressive lack of knowledge of how bodies work. In a sense, I guess I have a strange kind of respect for him, the kind where, when people start ragging on him, I think, “Rob Liefeld, you’re taking the rage for everyone else who sucks at comics and that’s kind of awesome.” But I don’t actually defend him because, usually, the people who are complaining are pretty much entirely right about every point they make. That’s why, when Prophet was recommended to me, I raised an incredibly unimpressed eyebrow.

Reading Prophet was like going to the dentist. Before you get in, you sit around grumbling, but, really, that’s just a front because you’re scared of that gigantic syringe that can’t possibly fit inside your mouth and looks like it is going to hurt worse than anything you could imagine. With Prophet, it wasn’t an enormous needle I was trying to pretend I wasn’t afraid of; it was the horrible possibility (which seemed more like a certainty) that it was going to be awful. That I was going to have to write that these guys – one of whom, I found out, is actually from my town – are really not terribly good, and then worry that every guy I passed on the street was actually him and feel awfully guilty about it forever.

I took the shot. I sat down and read it, and was immediately absorbed into it. Any questions asked of me were answered mindlessly without my ever taking my eyes off the comic. I shoveled food into my face while simultaneously devouring whole pages of Prophet. Had the entire island I am living on sunk into the sea, I am quite certain I would have sat at the bottom of the ocean, still reading, absently shooing away schools of curious fish and the odd inquisitive octopus. At the end of it all, I was left with only one thought – when is the next issue coming out?

Sci-fi pulp is hard to do right, but Prophet makes it work. It’s old school Star Trek-meets-The Maltese Falcon, with a dash of James Bond for good measure. It’s clever enough to be campy without being cheesy and never insults our intelligence. I was expecting John Prophet to be a Chuck Norris, but he’s more of a Les Stroud, improvising in order to survive in his alien surroundings like an outdoor MacGyver. As a child, John Prophet probably earned a lot of badges in his intergalactic Boy Scout troup.

The best thing about Prophet is that the hero is pretty average – he’s accessible and the amazing things he does never seem ridiculous or unbelievable. Sure, the landscape is bizarre and the other creatures are fantastical, but Prophet himself is one-hundred-percent regular guy. It’s easy to think that if you were stranded on an alien planet, you would be surviving with as much style and ass-kickery as John Prophet.

There’s something about the art – there needs to be a word for the style. It’s visceral without being disgusting, gritty without being dark. It shows the beauty in the struggle inherent to life with quiet honesty, making it more realistic than photorealism. Living is a dirty, messy business and Prophet‘s art tells you that, but it also tells you that it’s gorgeous and wonderful, too.

Prophet is sci-fi comic storytelling at its best. It is everything that sci-fi should aspire to. Don’t let the fact that it was originally created by Liefeld deter you – this is an amazing, fabulous, breathtaking comic that you shouldn’t miss.

You can buy Prophet Vol 1: Remission from Amazon.com.