Can I just say how great this is? How awesome to read comics where the female protagonist is a tough-as-nails old lady? I mean, I would have settled for just an average woman, someone who wore reasonable shoes and whose breasts followed the rules of physics, but The Fuse completely steamrolled my tame request by sticking every single badass old woman in history in a blender and pouring the distilled mixture into one cantankerous mold.

There’s not really much plot here yet, being the first issue and all – it’s mostly just meeting the characters and getting a feel for the setting. A death that would seem routine to anyone other than our whip-smart protagonists who immediately spot the inconsistencies and find a deeper mystery. The characters and setting are more than enough to sell you on the next million issues, though.

I love the protagonists: a snarky old lady cop, and her handsome and clever young 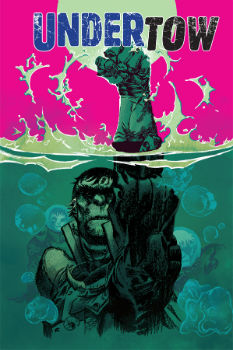 partner (who is not white because this comic gives a middle finger to all of the standard character types in comics and I absolutely adore that). I also love the way they interact: They irritate the hell out of each other. This isn’t sly winks and come-hither glances, and I am so glad of it because that stuff gets old heck of fast.

The Fuse is a knight in shining armour, fighting its way to my door through the vapid dudebro sausagefest of modern comics to whisper, “Let me take you away from all this” in my ear.

Undertow is gorgeous. Beautifully drawn and with vibrant colors, its art deftly pulls you into the epic, fantastic story. Atlantis is already submerged, and full of fish people that would be more at home in Hellboy than The Little Mermaid. It’s also in the midst of a rebellion, led by the charismatic Redum Anshargal, a mixture of equal parts Che Guevara and Chuck Norris, whose vision for Atlanteans involves the subjugation of the dry parts of the world, along with its primitive inhabitants.

Is “sausage fest” applicable when we’re talking about mermen? Should I say “sea cucumber party,” instead? Whatever the term is, it’s very much that, though not in a way that makes me lose interest. There are female characters and though this issue wouldn’t pass the Bechdel test, it isn’t doing anything stupid with its fishladies, either. As ridiculous as it is, that is something that I really appreciate, because it is so absurdly rare. I wish more stories about men being manly could include women without making them liabilities or trophies.

Undertow has very deftly created an interesting world with very compelling characters, and has set the stage for a wonderful story. I also love that these are rough and grizzled beings – they’re such a large step away from what I’m used to from the word “Atlantean.” This is definitely one to keep an eye on. I expect amazing things from it.