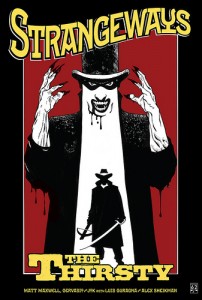 Westerns and vampires are genres that should be mixed more often. Heck, Western with a streak of any kind of supernatural shenanigans needs to become more prevalent. There’s something about the lawlessness and desperation of the Old West that makes it an exciting and entirely believable breeding ground for the paranormal.

A mysterious stranger comes to a town full of vampires. Their leader is a tall, lean creature who gets his fashion sense from Hellsing’s Alucard, right down to the wide-brimmed hat and long, dark hair. I can’t really say I blame him, though – Alucard was rather dapper and I’m sure that if I were turned into a vampire, I’d probably emulate him as well.

Carefully following all of the tropes of any good mysterious stranger (The only thing he doesn’t seem to do is play guitar), our grizzled hero manages to escape the clutches of the vampires – saving another poor traveler, for good measure – and rides to the nearest town. The vampires seem to have had the same thought and are hot on his heels. Doing what any proper mysterious stranger should, he helps the town prepare for a brutal fight against the undead.

I know that Strangeways: The Thirsty is a genuine Western tale, because you can tell how important the people in this story are by the size and impressiveness of their hats. In fact, Strangeways: The Thirsty is so hat-centric that I was half-expecting a surprise appearance by Queen Elizabeth (who, I do believe, would be an excellent vampire slayer).

The art is good but weirdly pixilated and blurry. The text is perfectly clear, which is a strange juxtaposition that ends up making me feel like I need new glasses. Perhaps this is a problem with the review copy that has been fixed in the actual edition. Whatever it is, it’s unfortunate because it detracts from the quality of the artwork.

Honestly, as much as I enjoyed mysterious strangers and behatted vampires duking it out in the Wild West, I much preferred the origin story at the end. With an almost lyrical style that is at times reminiscent of Poe, it is a beautifully written piece that far surpassed my expectations for this comic – or any comic, really.

I’m having difficulty figuring out how to properly segue from a gorgeously prosaic comic book that would put passion back into the shriveled hearts of long-dead writers to one that is probably at least part of the reason that Lovecraft is spinning circles in his grave (the main reason being, of course, almost every movie based on his work that has ever been made), so I won’t. 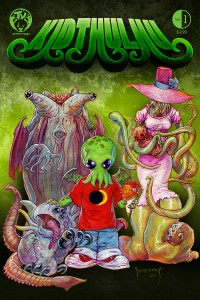 I’m not trying to say that Kidthulhu is bad – it’s actually a whole lot of fun – but I think Lovecraft would be a bit perturbed if he knew that his unspeakably evil, madness-inducing, hideous creation had been turned into the cutest little thing that I just need to pick up and cuddle. Look at those chubby cheeks! I want to jump through the page and give him a hug. Yes, that’s right. He’s horrible and nasty and terrifying and so adorable you could just eat him up. He even has a pet shoggoth and they get themselves into all kinds of mischief, despite having Nyarlathotep as a nanny. If Nyarlathotep were my nanny, I would be a lot better-behaved, let me tell you.

It’s like Dennis the Menace, except with the Mythos and, you know, good. It’s cute and fluffy and full of neat little references that nerdy people like me get excited over. It’s like reading normal Lovecraft but without the whole soul-crushing-knowledge-that-we’re-all-doomed bit.