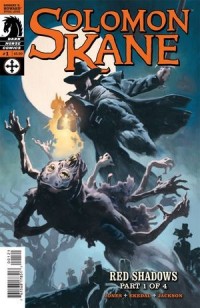 In comics, there are only two types of heroes: the ones who wear flashy, spandex costumes and the ones who don’t. This distinction carries through to the real world, too. Not for heroes – real-world heroes can be anyone from a firefighter to your mom and are too numerous and varied to categorize by apparel – but for pretty much everything else. There are the people who dress in fancy, tailored clothes and then there are people like me. It’s not that I don’t try to look well-put-together; it’s just that my superpower is to make even the fanciest clothes look rumpled and ill-fitting.

I’ve always had slightly more love for the less-flashy-looking heroes. They seem a bit more real, somehow, a bit more human. I think I could sit down and chat over a cup of tea with Wesley Dodds, but I can’t say the same about Bruce Wayne – what would I even say? So, you’re Batman. What’s that like? And then he’d roll his eyes at me and ask the waiter for the cheque.

In honour of all the people like me, who can’t dress up to save their lives, I’m reviewing three comics featuring heroes who don’t need fancy clothes to be amazing: Hellboy, Liz Sherman and Solomon Kane.

It’s kind of silly, but I feel like I have some kind of connection to Hellboy, in a six-degrees-of-Kevin-Bacon sort of way. Years ago, I fell in love with a beautiful, red-rimmed plate with a large, white skull in its centre at a glass-blowing studio. I needed it. I had to have it. It was as vital to my existence as air, water and chocolate. The day after I’d bought it, I returned to the store to try and find the artist who’d made it. Even now, I couldn’t tell you why, but I felt an overwhelming need to know what meaning it had and I was certain it had one. I was in luck – he happened to be there. He told me that he was a huge fan of Hellboy and the skull design on the plate was based on the skull from Hellboy comics. I’d never read Hellboy, but I figured that this was a sign that I should start. I got the first trade that day, and was a Hellboy fanatic by that evening.

There’s something very accessible about Hellboy. I’m not sure what it is about him, or what it says about me, but I find that he’s one of the more believable heroes. Sure, he’s huge and red and horned and not human, but he’s also awkward and emotional and compassionate and flawed, just like the rest of us. I think Trevor Bruttenholm likely had a more typical father-son relationship with Hellboy than Jonathan Kent did with Superman. 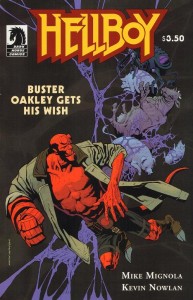 I was so excited to read Buster Oakley Gets His Wish, the new Hellboy one-shot. I’m always excited to read Hellboy, honestly, and I’m never disappointed. I wish that I could be as consistently awesome as Mike Mignola, or even maybe just that awesome on alternate days. Kevin Nowlan is also awesome (maybe I could be as awesome as he is on the days I’m not as awesome as Mignola?) and the artwork is absolutely gorgeous, although I do miss Mignola’s art. I’m not really sure how much I should say about the story – I loved the title because it says so much and yet manages to remain vague, until you’ve read the thing, and then it’s almost a punchline – and I don’t want to wreck that for anyone. But it has aliens and cow mutilations and Hellboy’s sardonic wit and really, how can you go wrong with that combination?

I suppose you could argue that the reason Solomon Kane doesn’t wear a fancy, lycra bodysuit is because they weren’t invented in his era, but I think he’s not the type for spandex, anyway. Red Shadows #1 is an adaptation of Robert E. Howard’s “Skulls in the Stars”, and it is a fantastically creepy story, wherein Solomon Kane finds himself facing an evil spirit who haunts an English moor road. The art is gorgeous – beautiful, smooth, colours contained within crisp lines that make the movement flow in a way you can almost feel. The writing is tight and fast-paced, which combines with the art and pulls you in, not letting you go until long after you’ve turned the final page.

BPRD: The Dead Remembered #1 is the first of a three-part miniseries about Liz Sherman, who wears a lot more clothes than most female protagonists in comics. She has a story of her own, her own motivations, and she doesn’t just exist in BPRD so that she can be placed in horrible situations and then rescued by the male protagonists, something that is fairly rare with female comic book characters. The really great thing about Liz Sherman is that she’s pretty much a regular person…it’s just that she has this whole pyrokinesis thing.

In BPRD: The Dead Remembered #1, we’re taken back in time to 1976. Liz is 14 and she’s being taken to a small town in Massachusetts to investigate a haunted house. The art is decent, though forgettable, as the writing is so amazing that its power would likely overshadow pretty much any artwork. The story grabs hold of you and pulls you in with dizzying speed – it’s easier to make the earth stop rotating, using nothing but sheer force of will, than it is to put down this comic before you’ve finished it. That said, though, I did really hate one thing about it – the part where it said, “To Be Continued” and I had to wait until #2 is out to read more.

It’s not that I don’t have love for heroes in tight costumes – Seaguy is one of my favourite comics ever and its titular hero’s suit, though not exactly flashy, could hardly be any tighter – but as someone who can iron clothes and have them wrinkle up again in a matter of seconds, I have a special place in my heart for gruff heroes who don’t need a great wardrobe to be cool.