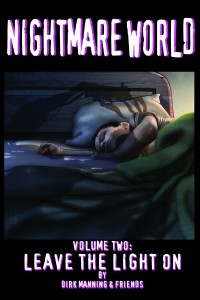 Is it just me, or are there a lot more anthologies getting published lately? Not that I’d complain if there were – anthologies are a great way to find new favourites.

Nightmare World is an anthology of extremely short horror comics, all written by Dirk Manning, who also writes columns for Newsarama and wears awesome hats. The abbreviated format gives Manning an opportunity to show how adept he is at character development – it’s amazing how you can be drawn into a story so quickly, how you can “know” characters you’ve had only a few pages to interact with.

The stories are, on the whole, quite clever – from a snarky spoof of slasher movie format to deals with the devil, the anthology attempts to pull back the veil of the familiar and expose the gory, disturbing underbelly beneath.

While Nightmare World claims that all of its tales are interrelated, their relationships don’t beat you over the head with their obviousness, which is actually rather refreshing. It’s always great to see someone being subtle in comics because there doesn’t seem to be enough of it out there. The exception to this rule, Bad Romance, tries to knit some of the plotlines together and, because of this, turns into less of a story in its own right and more of an information guide.

The titles of the minicomics are names of songs from widely varying artists. There are Placebo, Johnny Cash, Guns N Roses, Korn, Soundgarden, Alanis Morisette, and a whole bunch more. It’s a neat idea, but I think it would have worked a bit better if the song titles had all come from the same artist. At times, it felt like the tales had absolutely nothing to do with their titles, and that the names of some of the stories had been hastily tacked on after they were written, in order to fit the theme. The broad mix of genres and styles was jarring, and took the focus off of the stories, leading instead to speculation as to why Manning would choose that song or that artist. Perhaps, if only one artist had been chosen, it would have given a better flow to the tales, adding even more interconnectivity, and it would give the added bonus of seeing how the same band could influence artists differently. It would be really great to see an artist that wouldn’t typically be associated with the horror genre, too. Marilyn Manson is too obvious, and Britney Spears would be difficult to take seriously, but what about Nick Cave? Pink Floyd? Led Zepplin?

The art in this series is fantastic. Really, it’s wonderful. Its worst is on par with the average in mainstream comics today; its best is far, far superior to most of the artwork in the comics I’ve been reading lately. I don’t think this is something I can praise this collection for enough – the art is fabulous and wonderful and, most importantly, different. The artists use all kinds of styles and all kinds of methods, and each one is amazing. Each takes the story and makes it its own, adding its own distinct flavour to the writing. If this is the future of art in comics, then I am honoured to read.

Unfortunately, though, the editing wasn’t always at the level it should have been. The volumes were peppered with grammar and spelling errors. At one point, “crochet mallet” is used in place of “croquet mallet” and, while crochet mallets definitely sound like a great way to usher crafting into the X-Games, the ensuing reverie about how awesome Extreme Crocheting would be marred an otherwise great story.

To be fair, I think everyone can agree that there are few stories written that wouldn’t pale in comparison to such an hilarious juxtaposition. Editing is important – it keeps readers involved in the storyline, rather than sending us off into fantasies of buffed-out grandmas, competing to the death to crochet the best afghan.

This is, I think, definitely something to watch. Nightmare World has its flaws, as most things do, but the promises it brings with it are numerous. If Nightmare World can manage to attain even a small fraction of its potential in the future, it will be an amazing, breathtaking piece of work.

You can find Nightmare World, vols. 1 and 2, on Amazon.com.