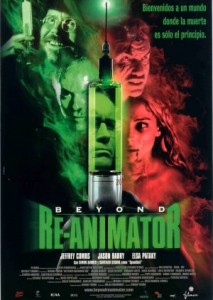 First, there was the original, certified cult classic flick that everyone loved, and rightfully so. Re-Animator should easily make it onto anyone’s top ten horror of the 80s list. Next came the sadly lackluster sequel then even the most diehard of Re-Animator fans could only give faint praise to. Then, after 18 years of nothing, the highly-fan-anticipated third film came out. Would some of the magic of combining horror with humour and blood with boobies that made the 1985 original so good come back after so long? Would such a film even find an audience in 2003? Well, grab your syringe of glowing green goo and let’s find out.

Beyond Re-Animator begins a dozen years back, when a young boy named ‘Howie’ is having a backyard sleepover in a house that just so happens to be right next to the Christchurch Cemetery. This little slice of all-American fun is interrupted when one of Dr. West’s formerly-life-impaired playmates gets loose and strangles the boy’s big sister right before his eyes. This leads to the immediate arrest of Dr. West, who drops a syringe of his glowing re-animating juice before getting placed into a cop car. Poor Howie also sees this and picks up the green serum. So begins the boy’s fateful journey.

The story then jumps to the modern day and little Howie is now a young Dr. Howard Phillips (Ha, get it?) who takes a job far below his education level at a local prison, just so he can get closer to the man who has so changed his life – Herbert West. Dr. Philips requests to have the now-convict West as his assistant. Howard even still has the original syringe of green goo from 13 years ago to show his hero. Just like any junkie, Dr. West can’t resist the needle. Soon, the two begin the old song-and-dance of defying death that Herbert West and his far-more-moral and reluctant half, Dr. Dean Cain, started so long ago. Yeah, the original pairing of Jeffrey Combs and Bruce Abbott as West and Cain is sadly missing here, and Cain’s absence is explained in a throwaway line that he turned state’s evidence against West. Also, actor Jason Barry as Dr. Howard Philips is a poor replacement for Abbot. Not only is he just a much-worse actor who is about as fun to watch as plain rice cakes are fun to eat, he has zero chemistry with both Combs and his shoehorned love interest, a feisty female reporter.

Once Howard and Herbert get together, things go on as you would expect with both a Re-Animator film and a stereotypical prison film, complete with a mwa-ha-ha-ing evil warden taking the place of evil Dr. Hill from the first two films, some blockhead guards that only exist for comic relief, indiscriminate shankings, and the ever-popular prison riot. However, one thing is oddly missing from this men-behind-bars movie and that is a single African American in it, other than a brief twenty-second shot of a black security guard at the end. How can this be? Well, because this movie, like all of producer/director Brian Yuzna’s later films, was filmed in Spain to save cash. Now this, in and of itself, isn’t a bad thing. If the movie were set in Spain, as Stuart Gordon wisely did for his film, Dagon, it would be no problem at all. However, Beyond Re-Animator is obstinately set in HPL’s New England and as such, it fails completely. Not only does the Made-in-Spain factor mean that the vast majority of the actors have unexplainable, often-thick Spanish accents, and result in the aforementioned lack of anyone of colour in the movie, but whenever the film gives us an outside establishing shot, it’s pretty clear it’s not America, let alone the small college town of Arkham it insists on saying the prison is located near.

Casting and location missteps aside, this movie does at least try to do a few new tricks, something Bride of Re-Animator was sorely lacking. There’s some new technobabble with “nanoplasm” and the transference of conscious between people, and even between people and rats. That new twist in the tail leads to some good old-fashioned wackiness, including one character growing some rat-like chompers and crawling around on all fours. Then there’s the junkie who shoots up with West’s amazing green goo, with the expected bad results. But, sadly, some of the same old beats that formed the first two films are banged out here in the old “Hey if it worked once, and it worked twice, it’s got to work again, right?” mindset. This includes the previously-mentioned girlfriend of Dr. Cain…oops, I mean Dr. Philips, dying, just so the hesitant young man tosses all moral objections aside to bring her back to life.

Beyond is a better film than the first sequel, in so far that it is more competently made. Brian Yuzna, who directed both sequels, has obviously improved a lot in the almost two decades between films. The newer movie doesn’t have that direct-to-video look and feel to it that plagued Bride of Re-Animator. The special effects, always a highlight in a Re-Animator film, range from pretty-well-done practical makeup effects, to really-poorly-done makeup effects, to incredibly-fake-looking CGI effects. But hey, there is a mid-credit fight scene between a rat and a severed, reanimated penis, so make sure you stay tuned for that.

Final Verdict: Beyond Re-Animator isn’t a horrible film, but it’s far from perfect. Easily the best thing in the movie is Jeffrey Combs as Herbert West. That alone is worth the price of admission. There are a few good gore gags and some black humour, albeit far less of both than either the first or second Re-Animator flicks. On the down side, other than West, there are no memorable characters here, certainly none that you care about, and the absence of Bruce Abbot’s Dr. Cain is tangible. Also, as each sequel happens, the links with Lovecraft and his story get stretched thinner and thinner. So, with all that in mind, and because this movie ends with an obvious set-up for yet another sequel, I must ask – Does anyone really want that?