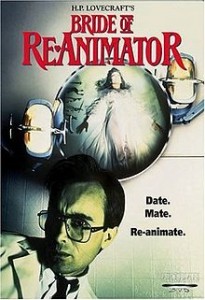 The other day while flipping through cable, I came across this movie that I had seriously all-but-forgotten about, and that’s with me owning the DVD. I came in on this flick at its middle, which is the slowest, most uninspired part of the film, and naturally, I thought, “Ha, no wonder I wrote this one off.” I then quit watching and went back to doing whatever I was doing before stumbling upon the flick. Yet, a little nagging question stayed with me. Was I judging this movie too harshly? Was my absolute love of the 1985 black-comedy splatter classic (which you can find my thoughts on here) colouring my memory of the admittedly-less-than-stellar sequel? Well, unable to shake that pestering question, I pulled the disk off the shelf and gave it a watch. Was it as forgettable as I (barely) remembered it being, or had I developed a deeper love for this Bride? Let’s find out, my fellow Cthulhu pals.

Bride picks up where Re-Animator left off, with brilliant and mad Dr. Herbert West, and his much-put-upon doctor pal Dan Cain, still together and doing the bringing-life-back-to-the-lifeless thing. Yes, I know Dr. West was killed by the angry intestines of his nemesis, Dr. Hill, at the end of the last movie and, sadly, this movie never addresses how Herbie managed to escape the crushing coils. Well, at least, not officially. There is a deleted scene on the DVD where West delivers, in perfect deadpan, a throwaway line of “No, Hill didn’t kill me…he didn’t have the guts” that, while very silly, still should have been in the official cut of this movie, if for no other reason than to address the end of the first film. But, as slapdash as the reasoning for bringing West back, it just wouldn’t be a Re-Animator movie without him. Likewise, I can’t imagine anyone but Jeffrey Combs playing the mad doctor and Bruce Abbott also reprises his role as Dan. Even the evil Dr. Hill makes a comeback – or, at least, a part of him does – and David Gale returns to play the vengeful-and-bodily-challenged, undying head.

The actual plot of Bride starts off with some surprisingly strong ties to the original Lovecraft story, with West and Cain working in a military hospital, so as the have access to the freshest of all possible subjects for their reanimation shenanigans. However, due to the modern (1990) setting of this film, the scene is transplanted from the French front lines of World War I to the steamy jungles of Peru and some unnamed civil war. After some irate soldiers burst into the tent, the pair of docs barely manage to escape with their lives, and decide it’s time to return to their home stomping grounds of Arkham and the good old Miskatonic University Hospital. How these two managed to get hired at the hospital, after the slaughter that happened at the med school just eight months ago, forever remains a mystery.

What is also a mystery is why Brian Yuzna, taking over the director duties from the far-more-capable Stuart Gordon, decided to have this scene at all when the movie drops the setting after only five minutes. The amount of goofy, gory hijinks West and Cain could have gotten into in the middle of a war seems limitless, and the fact that it was so quickly brushed over seems like a huge missed opportunity.

Anyway, back in Lovecraft country, West and Cain move into an old house next to a cemetery, another bit taken directly from HPL’s tale. But this is where the connections to Lovecraft end, as Yuzna steers things down a decidedly Frankenstein path. West is now all about playing with the parts of dead people and making “new life” as opposed to bringing them back from the dead – his original obsession. He even makes a creepy-cute skittering pet out of some fingers and an eyeball for his own amusement. All this “morbid doodling,” as Dan puts it, turns out to be too much for the more-morally-sound member of the pair; Dan announces that he’s had enough and is leaving. West, not ready to lose his only friend, partner and accomplice, then starts stealing various bits of dead ladies in an attempt to build a new body for the heart of Megan Halsey, the girlfriend of Dan who died at the end of the first film. This keeps the lovesick sap firmly in the pocket of Dr. West and so, the slapstick buddy movie can continue on.

Add to this Mary Shelley-derived idea the aforementioned return of the living, decapitated head of Dr. Hill, who has lost none of his inexplicably vast mental powers, nor his thirst for revenge on West and Cain. And even though he doesn’t have his old body to lug him around anymore, he’s not going to let them keep him down, not when he has a weak-willed medical examiner and his own pet reanimated pal under his control. Before you can say, “That’s just dumb,” Dr. Hill has a pair of reanimated bat wings sewn to the side of his head, so he can flap around.

Yeah, this is that kind of movie.

Now, while the first film had the same kind of over-the-top gore gags and dark-as-night black comedy, it was nowhere near as campy as this flick and was just an all-around-better movie. It’s hard to put a finger on exactly why this sequel isn’t as good as its predecessor, but it’s a feeling that’s undeniably there. I don’t think it’s the actors’ fault, as Abbot, and especially Combs, are both as good here as they were the first time. The splatter, while a bit goofier – with finger-eye monsters, hopping foot-hand combo creatures, dogs with people’s arms attached to them and so on – is still competently done. I guess that only leaves the direction and story, both of which were done by Yuzna. I hate to lay all the blame at his feet, but if the shoe fits….

Final Verdict: Bride of Re-Animator isn’t an awful movie and it does have some nice bits in it from HPL’s story, most notably at the beginning and the end of the film. In fact, the end, while so campy that it should have Jason Voorhees haunting it, is surprisingly faithful to how HPL ended the serialised tale of Dr. West and his capering corpses. There is also a pretty good subplot, about a curious cop whose wife was one of the reanimated dead folks from the end of the first film, that has a nice payoff at the end. However, there’s an almost-tangible direct-to-video pall over everything in this flick, from the cheaper set design, to the shot-for-television cinematography, to Richard Band appearing to ape his music from the original film and doing so badly. In almost every way, this sequel is a pale shadow of the first film and just feels cheap, but it’s not altogether bad and it is actually better than I had remembered it. In the end, it is still goofy, gory fun and that’s what really matters in a Re-Animator movie.

You can find Bride of Re-Animator through Amazon.com