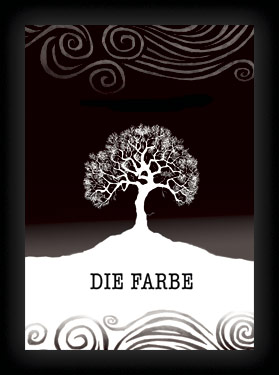 Just in case you don’t “Sprechen sie Deutsche”, the title of this independent, feature-length film from the land of sausage and schnapps translates into “The Colour“. Can you guess what HPL story it is based on? That’s right, it’s “The Outsider”. Ha, just kidding, it’s grandpappy Lovecraft’s personal favourite of all his own stories; “The Colour Out Of Space”. You know, the most-filmed of any of H.P. Lovecraft’s tales. What, you don’t believe that? Well, there was 1965’s Die Monster Die, starring Boris “Don’t call me ‘Frankenstein'” Karloff. 1987 saw another telling of this tale, called “The Curse“, starring Wil “Don’t call me ‘Wesley'” Wheaton. Hell, even Stephen King sort of ripped it off for his “Weeds” short in the classic Creepshow. But, wait, it doesn’t stop there. Last year, we got an Italian version called “Colour from the Dark“, which I reviewed right here. Now we get this German import, so how does it compare to all those other Colour flicks?

Simply put, it blows them all away.

To be sure, some of those other films had their bright spots; even the pretty crappy Wil Wheaton one had a few good moments. Further, I enjoyed Colour from the Dark quite a lot, but this is easily the most faithful adaption of Lovecraft’s “Colour” ever put to film. In fact, it’s one of the best Lovecraftian films ever made, period. Writer/director Huan Vu transferred the story almost scene-for-scene from HPL’s story to the screen. For all the people who say Lovecraft doesn’t translate well into film, they need to sit down, shut up, and watch how it can be done right.

I’d be very happy if Guillermo del Toro gave this movie a watch before starting his At The Mountains of Madness. Yeah, it’s that good.

But before we really get into it, a quick warning: if you haven’t yet read the Lovecraft story, you should do so before seeing this film or even continuing with this review. Yes that’s common sense and you’ve probably already done so, but I thought I’d mention it. Now, a heads-up: about 75% of this movie is in German with subtitles. No surprise there, since it was made in Germany, but some people don’t like to read when they watch movies, so I thought I’d give them fair warning. The actual surprising thing about this film was just how much of it was in English. Why was there English in a German flick? Well….

Yeah, this is a spoiler space.

One of the few ways this movie deviates from the original story is in setting and time. Here, we get a young American named “Paul”, who goes looking for his missing father, who was last seen in Germany as an army medic after World War II,. Traveling to the small, wooded farming community where his dad disappeared, Paul meets an old farmer, who witnessed the slow destruction of his friends and neighbours, a family called the “Gardners”, or in this case the “Gärteners“. He also has a tale to tell about Paul’s long-lost father.

What follows next is pretty much a word-for-word retelling of HPL’s tale of a cosmic entity coming to earth inside a strange meteor. The extraterrestrial rock comes down near the Gärteners’ farm and an alien lifeform, which only can be described as an indescribable colour, permeates a farmstead, causing untold weirdness to happen over the course of a year. Yes, no quick, wham-bam scares here; this is creeping, inescapable dread at its finest. Vegetables grow huge, but are rotten; trees sway when there is no wind; and one by one, the Gärteners begin to feel the direct effects of the evil colour. The family members go mad, they feel sick, and then…well, I won’t tell you what happens next, but if you’ve read the story, then know that this movie does a great job of showing the final horrors that befall the blighted farmers.

The whole movie is well-photographed in black-and-white. The special effects range from passable to very good, as does the acting, and the direction is more than competent. That is not to say this movie is completely without foibles. Some of the German actors playing Americans don’t hide their accent a lick, and there was one shot that really baffled me. It had two characters talking in front of a painfully-obvious, green-screened background. Now, the backdrop wasn’t some strange, alien vista that needed technical wizardry to pull it off. No, it was a library. Are there no libraries in Germany, anymore? Thankfully, the rest of the movie is shot on real sets, or if they are not, the special effects are handled much better so as not to be so glaring. However, such things as accents and bad CGI backdrops are minor complaints, really, and if that’s all I can point to as faults with this film, then that says a lot for its overall quality.
Final Verdict: This is a great movie. It’s exceptionally Lovecraftian and a cinematic treat for both Mythos fans and those new to the cosmic horror of HPL. I cannot recommend this film highly enough. While not available through the usual online sources, you can order Die Farbe directly from the website: www.die-farbe.com. I highly urge you to do so, not only because it’s a great film, but also to support independent filmmakers who dare to bring Lovecraft’s horror to the movie masses.

Bio: Brian Sammons is an author and critic of dark things and an all-around troublemaker. Sadly, you can’t follow him on Twitter because he abhors Twitter.