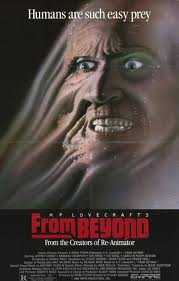 After director Stuart Gordon made a certified horror, splatter, black comedy, cult hit with Re-Animator, he tried to see if lightning would strike the same place twice by, not only doing another Lovecraft flick, but teaming up with half of the Re-Animator cast once more for From Beyond. Now, if you ever read the original short story by H.P. Lovecraft, then you’ll know there’s not much there. Sure, it has a kick-ass idea about creepy crawlers existing, unseen, side by side with us, but that’s all it’s got. The entire story is a whole eight pages long and Gordon pretty much sums it up in the brief before-credits sequence of his film. So, if that’s the case, what does Stuart Gordon use to fill the rest of his feature length film with?

Padding, lots and lots of padding, but what fantastic and fun padding it is. From strong performances from his actors, to inventive and splatastic monster effects, to an interesting, albeit pretty gross, spin on how people can see those “from beyond” and the price they pay for such insight. Oh and my personal favourite; a subplot involving S&M and the lovely Barbara Crampton getting all freaky-deaky in some spank-me gear. Yeah, I was around 14 years old when I first saw this movie on a rented VHS and that scene had a lasting effect on me, to say the least. But lest I wander too far down Pervy Memory Lane, let’s get the review going.

The lecherous, sadistic, brilliant-but-creepy Dr. Edward Pretorius and his assistant Crawford Tillinghast, who is far more sympathetic here than he was in Lovecraft’s tale, have created a machine that allows anyone in close proximity of it to see beings “from beyond”. That is, extra-dimensional critters that exist alongside us but just out of phase of our feeble five senses. Unfortunately, when the machine is switched on, it also allows those beasties to see us, as Dr. Pretorius soon learns when he has his head bitten off, “like a gingerbread man,” by one particularly big, bad nasty from the other side. Crawford smashes the machine and lives to tell the tale; unfortunately for him, he’ll only be telling his story to the shrinks at the local asylum.

Jeffrey “Herbert West from Re-Animator” Combs plays Crawford as a muddled and possibly murderous mad scientist, but one who, at heart, is a good guy. His young and attractive psychologist, played by fellow Re-Animator alumnus Barbara Crampton, doesn’t believe his crazy stories of monsters, but she really wants to help him out. Too bad for everyone, her idea of “helping” is to take Crawford back to Pretorius’ mansion to force him to face his fears. Oh, and since being alone with a possibly homicidal madman isn’t all that bright, she brings along one big, bad cop in Ken “Dawn of the Dead” Foree.

Once back at the scene of the crime, the trio soon learns that the ghost of Dr. Edward Pretorius isn’t completely gone. Well, sort of. I won’t ruin the story by giving you the specifics, but let’s just say that the kinky doctor is still around and yet, is something both far more and less than human. Even with the Pretorius Thing stuck on the other side of the “beyond” barrier, it can still influence our world in a number of ways and that includes remotely operating his resonator machine. That allows all sorts of Lovecraftian horrors to come slithering into our reality, not to mention, the big, bad beastie to get its slimy tentacles on some nubile new flesh to play with. Cue some kinky sex games, as the hum of the resonator stimulates everyone in a whole bunch of nifty ways, a cavalcade of very Lovecraftian-looking monsters popping into and out of our reality, a gruesome death or two (Someone gets eaten down to the bone by a hoard of man-eating mites and someone else gets their brain sucked out of their eye socket), and awesome alien effects, as the Pretorius Thing never likes to look the same way twice whenever it pops up to say hello.

Final Verdict: While not as splatastically fun or over the top as Re-Animator, From Beyond is a gem of a movie, a prime example of why the 1980s is my favourite decade for horror flicks. It is made with a ton of style and by people with an appreciation for the source material. Of special note is Jeffrey Combs, who gives a surprisingly sympathetic performance as the damaged and more-than-slightly deranged doctor, and proves that he can be more than the detached, deadpan, straight man that made his Herbert West so great. From Beyond is also pretty faithful to the Lovecraft story. Sure, it has to expand on things and add some padding, but since the original tale was so tiny, it had no choice but to do so. This film is not only very Lovecraftian but a whole lot of fun, and so, it gets a high recommendation from me for fans of HPL and horror movie lovers, in general. If you have yet to see From Beyond, then do so with all haste, as you’re really missing out on something special.