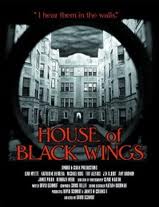 With Cthulhu and Co. popping up in episodes of South Park and Scooby Doo, it seems that not only is Lovecraft finally getting some of the love he deserves, but that the Cthulhu Mythos as a whole is having sort of a heyday. There have never been more fiction books, comic books, RPG games and supplements, or films about the Mythos, as there are now and I, for one, am loving it. The latest film to exemplify this is one that might have slipped under your radar; I know it almost did mine. Luckily for me, it pinged on my screen after I watched another great Lovecraftian movie, Pickman’s Muse, and luckily for you, I am going to review it now, so that it might ping for you, too. Because independent, well-made horror movies and, especially, cosmic horror that would be at home in any Lovecraft story, should not be allowed to go unwatched.

For those that always, and rightfully, say that there are no good female characters in Lovecraft’s (or Lovecraftian, in general) stories, rejoice, for our protagonists here are Kate and Robyn, two young ladies, artists, and BFFs. Kate is the lead singer of a punk rock band who recently suffered a shocking tragedy that sent her spinning. Desperate to find a safe place to land, where she can make sense of things and sort her life out, she turns to her old friend, Robyn, who has a passion and a talent for making dollhouse-like dioramas as works of art. Robyn lets Kate crash with her at her apartment, in a building with the somewhat-foreboding name of ‘Blackwood’. Hmm, people with sensitive, artistic sensibilities, suffering from tragedies and in a somewhat-creepy location? I can all-but-see HPL nodding with approval.

All-too-soon, Kate starts picking up on some weird vibes coming from the building about one of the previous tenants, a lonely musician with a past eerily similar to her own, who might not have had the best of all endings to her life. Dreams turn into nightmares, which become waking visions and hallucinations…or do they? Could the ghostly images Kate keeps seeing be real? What about the skittering sounds of rats in the walls? Oh, and if your Lovecraft alarm starts going off at the sound of that, don’t worry. That’s not the only thing that will trip it in this film. Naturally, Kate starts to think that she’s going a bit bonkers, but if so, that doesn’t even begin to explain the strange events her friend Robyn is now witnessing, or her obsessive focus on her work that has recently taken a disturbing twist. Oh, and did I mention their odd writer neighbour, who seems to be losing more and more of his marbles as his “deadline” draws closer? Yeah, I’m sure there’s nothing wrong, there.

In addition to all the weirdness, which thankfully, more often than not, is genuinely effective and creepy, Kate starts to investigate matters like a character out of Grand Pappy Lovecraft’s book. An old journal is discovered, some arcane words are found painted on a wall underneath the wallpaper, and various other clues are discovered and examined. Most of these investigations bear fruit that helps explain both the strange happenings and the overall mystery, but unfortunately, not all questions are answered, and that includes the ones about the titular black wings. Now, I’m all for keeping some parts of a mystery…well, mysterious, but some things do need at least a little explanation and, when you name your film after a specific thing, you’re going to have to back that up with something a little more substantial than what we’re given here. Yeah, sadly the oogly-booglys are pretty much glossed over and never thoroughly, or even partially, explored or explained. The good news is that’s probably the only gripe I had with this film and even that is more complementary than anything else, as it shows I was invested in the story and wanted to know more.

The House of Black Wings was not only an enjoyable film, but a surprisingly-well-made one when many low-budget horror films are, to be honest, quite terrible. Here, the unknown actors play their parts well. The story is moody and atmospheric, if a tad slow at times, but the characters are well-developed and the direction is more-than-competent. The special effects are used sparingly, but, when they show up, they are well-done. Most importantly, Black Wings succeeds at melding psychological horror, ghostly hauntings and cosmic dread, with enough human drama to make the audience care about characters and what will become of them. That’s no mean feat.

Final Verdict: This film was very Lovecraftian without having to resort to namedropping Lovecraft’s Great Old Ones, dreaded tomes, shunned locations, and other trademarked bits. Writer/director David Schmidt shows that he knows what makes HPL’s fiction so compelling without having to plagiarise the source material. So, if you’re looking for some new cosmic horror for your viewing pleasure, give The House of Black Wings a try. To get your own copy of this DVD, you can either hit up Amazon.com or order directly from the film’s distributor here: https://www.createspace.com/285084.