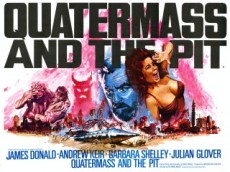 Hello one and all. My name is Brian M. Sammons and I am a raving, sometimes drooling, cinecephalophile. That is a rare subset of movie fanatic that has particular, and peculiar, tastes for films about Cthulhu, those based on the stories of H.P. Lovecraft, or that have Lovecraft’s feel of inescapable, cosmic dread. There’re not many of us, but like any cult, we need new blood to survive, so that’s why I’m here: to bring you tales of films with connections to Grand Pappy Lovecraft and hopefully in time, and with the aid of subliminal messages, you’ll join us and become a cinecephalophile yourself.

Some Lovecraftian flicks are easy to spot. They usually have “H. P. Lovecraft’s” in the title or on the movie poster somewhere. Sadly, this doesn’t mean the film will be good, or even that it is really based on anything Lovecraft ever wrote. A tiny independent stinkfest from 2006 called Beyond the Walls of Sleep had nothing but its title in common with Lovecraft’s trippy dream fantasy, but that didn’t stop the filmmakers from naming it as such. I probably won’t be talking about that film (The less said about it the better) and, in fact, these two sentences mentioning it are already too much. So, let’s move on, shall we?

However, I am not here today to talk about The Thing. What, you expect me to give it up on our first date? What kind of boy do you think I am? Don’t worry; I’ll bring The Thing back some time later when we’ve gotten to know each other a little bit better. Today, I want to talk about Quatermass and the Pit, a British film from 1968 that was known in the states as Five Million Years to Earth.

There were three Quatermass films that originally came out on British television in the 50s and 60s. Later, the house that Dracula built, AKA the legendary Hammer Films studio, would bring these excellent sci-fi, horror-tinged films out to theatres. Quatermass and the Pit was the third, and final, of these movies, but it wasn’t the end of the Quatermass character, at least not in his native Britain. It is also arguably the best film in the series and inarguably one of the most Lovecraftian movies ever made.

I can hear you now: “A 60’s sci-fi flick from Hammer is one of the most Lovecraftian movies ever?” Yes, dear reader, it is. While there is no mention of the Great Old Ones, evil tomes, cults, or breeding-gone-wrong in this film, it does cover other key Lovecraft concepts in spades. Quatermass and the Pit has ancient secrets, the true origins of man, super science, technological explanations for the supernatural, the truth behind local legends, truly strange aliens that have had a hand (or a claw in this case) in the evolution of mankind, and a great not-so-happy ending. With all this going for it, H.P.L. would have loved this film.

In fact, this movie has so many great ideas in it that trying to write a short synopsis for it will be difficult without giving the cool surprise bits away, but I will try. While digging a new tunnel for London’s Underground rail system, workers find the ancient, caveman-like remains of what could be humanity’s ancestors. A more shocking discovery is found right next to those old bones, an “almost metal but not” ship of some kind. Naturally, thoughts first turn to it being a spaceship, but doubters suggest that it could have been a Nazi rocket meant to be a panic-inducing psychological warfare weapon. Since the ship is “sort of” rocket-like, the government calls in their leading rocket scientist to investigate the find. Enter Professor Quatermass and his posse of assorted academics.

Further investigation uncovers the craft’s occupants: insect-like aliens that bear more than a slight resemblance to medieval gargoyles and demons. Researching the history of the area finds that this place has always been shunned and considered haunted by many. In the past, it has been called “Hob’s End”, “Hob” being a nickname for the Devil, and there have been many reports over the years of strange, poltergeist-like activity, especially whenever the earth was disturbed. Well, since digging a subway tunnel is one hell of a disturbance, something is soon awakened in, not only the ship, but in the more sensitive human minds nearby. What follows are thought-provoking explanations of humankind’s origins on Earth, racial memory, psychic powers, and perhaps the very nature of evil that lives inside all men.

I am really hesitant to say too much more because this movie covers so many cool Lovecraftian ideas, and utilizes them so effectively, that it truly is a treat to experience this film firsthand with as little known about it the better. So, please use what I’ve written as something to whet your appetite. Do yourself a huge favour and track this little-known gem down and give it a watch. I think any sci-fi fan will find this incredibly smart, well acted, and skillfully directed movie enjoyable, but if you are a Lovecraft fan, then Quatermass and the Pit is mandatory viewing.

These have been the insane thoughts of this cinecephalophile cultist. Do you agree, disagree, have suggestions for films I should cover, or just hear screaming voices in your head telling you to do terrible things like I do? Then put pen to paper, or tentacle to keyboard, and leave a comment or two. I’d love to hear from you.

Verdict: so Lovecraftian you would swear Cthulhu was the cameraman.

You can purchase Quatermass and the Pit through Amazon.com.