Okay, before you read any further, let me say that if you’re a horror movie fan, a lover of dark comedy, or just someone who worships 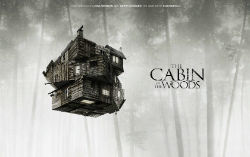 at the altar of Joss Whedon (hallowed be thy name), then go see this movie. I mean it – STOP RIGHT NOW; do not read this review, or any review of this movie; and do not see any trailers if you can help it. Take my word for it – go into the film as blank a slate as possible. You will get the most out of this flick if you can pull that off. The Cabin in the Woods has such an effective payoff (You’ll notice I did not say, “Twist,” as that term has almost become a pejorative in the wake of M. Night Shyamalan) that, like a bottom in an S&M club, the harder it can hit you, the more you’ll like it. And believe me when I say that chances are very good that you’ll love this little gem of a movie.

Still here? Okay, I’ll assume that either you have already seen this movie, or you’re one of those weird people that like to ruin any surprises that you may encounter. Let me guess – you also searched through your parents’ bedroom before Christmas, looking for presents before they could wrap them? Yeah, I thought so. Well, go on. Keep reading. I won’t try to stop you.

What The Cabin in the Woods does so very right is take the familiar, comfortable, perhaps downright clichéd tropes of horror movies and then not only spin them in new directions, but also explain why such elements are so damned familiar to begin with. Relax – here’s the SPOILER FREE setup to the movie. So, a group of five college students goes off for a weekend of fun, booze, drugs, and sex in an isolated cabin in the woods. Along the way, they meet a creepy old guy who basically tells them that they’re doomed if they continue to the cabin. He doesn’t go all Crazy Ralph on them and say that the place has got a death curse on it (and if you don’t get that reference, you need to watch more classic slasher movies), but he all-but-does that. Still, the dopey kids don’t listen to him and continue on their way.

The college students make it to an incredibly isolated and eerie-looking cabin. When I say it’s isolated, I’m not joking. Not only is there no cell phone service in the area, but the only way to reach it is through a tunnel through a freaking mountain. And by “eerie”, I mean it looks like an exact replica of the cabin out of The Evil Dead. Hell, it even comes complete with a trapdoor in the floor that not only leads to a creepy basement, but has a penchant for popping open all by itself, whenever it wants to. Hey, Scooby Gang, does a house literally have to yell at you, “Get out!” before you guys get a hint?

So, as you can guess, because you’ve seen it happen in a bunch of other horror movies, the group goes downstairs, finds a root cellar full of creepy items, and…

(Okay, last chance to get out of here with all the neat surprises intact. From this point on, consider this a BIG FAT SPOILER ZONE.)

…picks up an old diary. With that, they learn what happened to the family of sickos who owned the cabin some hundred years ago. Not stopping there, the stupid kids then read out loud a phrase in Latin. Really, when is doing that ever a good thing? And yes, that includes Catholic mass, but then, I’m an agnostic heathen who’s gonna burn in Hell, so what do I know? Anyway, next thing you know, the “redneck torture zombies”, as the movie actually calls them, come back from the grave and start looking for some new meat puppets to play with.

How can all this be happening? Because it was rigged and carefully planned to happen from the start by a mysterious shadowy governmental organisation. This is the first part of this movie’s greatness. You see, there are places like this cabin all over the world, where people are lured and then ritually sacrificed. It’s the ritual that is all-important here, and the secret organisation goes to great pains to enforce and correctly follow it. For example, the five college students actually start off as pretty-well-rounded and fleshed-out characters. Well, except for the dope-smoking stoner, who’s pretty much just pothead comic relief from the get-go. But the others are carefully molded into becoming the stereotypes that populate every horror movie, ever, and they are needed to play the roles that make the ritual complete. The big dumb jock is actually an honour student; the slutty blonde is, in reality, a brunette who just got a dye job; the virgin good girl is a regular young woman with a pretty normal sex life; and so on. It’s the government, through the careful use of chemicals and pheromones, that gets the kids to act like the archetypes it wants them to be. Case in point, the new blonde’s dye job was done by the secret watchers and included not only drugs to increase her libido, but some to dull her cognitive abilities, too. That’s right: They literally made her into the dumb, blonde slut you’ve seen in every horror movie since Halloween.

The plot goes even further than that. The Crazy Ralph stand-in is in on the plan and he serves as a last warning to the sacrifices. By ignoring him, they exercise free will and doom themselves. As for the basement full of creepy items, each one is linked to a different supernatural monster and threat. Some are obvious to horror fans. For example, as soon as I saw a brass-and-wood puzzle ball (as opposed to a puzzle box) I knew what the filmmakers were hinting at. Others are more subtle, like an antique broach or a creepy doll. When the college kids in this movie picked up the old journal and read from it first, they chose the form of their own destruction. Again, this is the film playing with the idea of free will, but it’s carefully controlled and monitored free will. Like a street magician forcing someone to pick the right card from his ‘magic’ deck in order to pull off the trick.

The scenes of the college students dealing with the horror unfolding around them are beautifully juxtaposed with scenes of the cold, callous and downright-hilarious government manipulators watching their every move and making sure they do exactly what they’re supposed to do. These guys pull all the strings, rig all the decks, but try to enjoy their dark work as best they can, such as taking bets on which horror the kids will unwittingly release on themselves when down in the basement. I guess, when it’s your job to slaughter innocent people, you’ve got to get your kicks when and how you can. Also, these unseen guys and gals are the real reason why people do such stupid things in horror movies. You know, like going out by themselves into the dark woods to check on a mysterious noise. Or how about when someone will drop the weapon they just used to supposedly beat back a killer, instead of taking it with them in case they may need it later? Little nods and winks to stuff like that sure did put a smile on this old horrorhead’s face.

“Okay,” I hear you saying (or maybe that’s just the voices in my head?), “so The Cabin in the Woods is a cool, fun fright flick that runs through all the horror tropes, but what is it doing in Cthulhu Eats the Movies? Don’t you discuss Lovecraftian films here?” Yes, yes, I do and guess what? Yep, shades of HPL can be found in this movie, right next to homages to The Evil Dead, Hellraiser, Friday the 13th, not to mention a whole host of classic horrors like werewolves, ghosts and unicorns. Oh, man, don’t get me started on the unicorns.

Now, the reason I decided to do this as a CEtM is because I saw some Lovecraft fans getting really hyped over this movie – and that’s all find and good. I think it’s a swell flick, after all. However, I saw some people on various websites loudly proclaim that “this is the most Lovecraftian movie I’ve seen in years!” Or something similar to that. And, honestly, it’s not. It’s a good movie, and there are nods to the cosmic horror H.P. Lovecraft created, but it’s not really a Lovecraftan movie. Don’t believe me? Well, read on for the last bit of SPOILERS on how this flick is related to HPL.

Remember when I said all this was one, big ritual important enough to get governments from across the globe to play along with the slaughtering? That’s because, deep in the earth, a race of “Ancient Ones” sleeps. Those big, bad guys will only remain sleeping if they are entertained and they’re only entertained by the meticulously controlled sacrifice of specific people in a specific order. While the leader of this secret governmental group in America (who is an excellent bit of stuntcasting, I must admit) says that each culture has its own rituals to follow, here in the good old U.S. of A, that means the stereotypical group of a slut/whore, jock, brainy guy, stoner/fool, and virginal good girl must be killed in order to appease the Ancient Ones.

Incidentally, there is a nice bit in this movie where they cut to the Japanese version of the ritual that had me giggling. Anyway, these Ancient Ones are described as “giant, evil gods” from before time began, but before you get too excited, those are all the allusions to Lovecraft you’ll get here. Even the shady organisation doing the sacrificing comes off as far more of a bureaucratic bore then a sinister, secretive cult. So, don’t go into this movie expecting to hear unpronounceable names dropped, or to see glimpses of Cthulhu or any of his cousins, because you’ll only come away disappointed. In fact, the only tiny bit we ever get to see of one of these Ancient Ones is a very large – but very human-looking – hand. Really, it is far more Greek titan than anything HPL ever created. And what little flavour of Lovecraft can be found in this movie could just as easily have been replaced with satanic overtones for the Rosemary’s Baby and Exorcist fans. It is nice to see some nods to good old H.P. Lovecraft, but calling this film, “the most Lovecraftian movie in years”? No, not by a long shot.

Final Verdict: The Cabin in the Woods is a great little horror movie for fans of horror movies that has as its greatest asset a sense of fun that seems to be missing from many modern genre films. Yeah, at times, it can be too meta, and there are little bits where you get the sense that writer Joss Whedon and/or director Drew Goddard think that they are being far more clever than they actually are, but those are minor nitpicks, at best. If you can turn off the snarky, hipster side of your brain and just sit back and enjoy a movie unironically, you’re sure to like this movie. However, for the record, it is not very Lovecraftian. Hey, no movie is perfect, right?