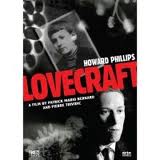 Now it’s time for the third H.P. Lovecraft documentary I promised in my last Cthulhu Eats the Movies column. Unfortunately, the third time will not prove to be the charm and that whole “saving the best for last” rule does not apply here. Yeah, this one isn’t all that good. In fact, it’s downright boring. But, as always, my fellow cinecephalophiles and Lovecraft-lovers, allow me just a few moments to prove my point and maybe I’ll save you from the terrible tedium I suffered through should you ever come across this movie.

This French import from 1998 I found on NetFlix and honestly, it wasn’t even worth a rental. At just 45 minutes, it is (thankfully) short and offers no new insights into Lovecraft the man or the amazing stories he wrote that changed the literary world. In fact, this documentary doesn’t seem as interested in highlighting Lovecraft’s history or mythology as it does in being an obvious example of what style over substance looks like.

To be sure, the style is pretty cool. The doc is filmed in black-and-white, and directors Bernard and Trividic show that they know how to use light and shadow to good dramatic effect. But as for their choice of content, well, that could use a bit of work. There are no interviews with admirers, experts, authors, or anyone at all, for that matter, to be found here, which is odd for a documentary. However, there are plenty of puppets, toy trains and dioramas in this movie, so I guess that’s something. Hmm. Come to think of it, that’s also pretty odd for a documentary. Interspersed throughout the film is archival newsreel footage from the 20s and 30s. Sometimes, the historic images on the screen pertain to the subjects being discussed, but just as often, they don’t. Lastly, there’s the narrative behind the documentary, in either French or English for your convenience, but it, too, is rather strange. The whole thing is told to H.P. Lovecraft instead of being about him or his tales. The narrator is constantly saying things like: “You always looked up the definition of an unknown word, you questioned the world around you constantly and you began writing at the age of eight.” While this is a novel approach, it doesn’t really work and gets old fast.

Then there is the joy this documentary seems to take in describing Lovecraft as a frightened, xenophobic racist, as if that were his one and only characteristic and the only reason why the man wrote anything at all. Now, it’s true that HPL had his share of flaws and yes, that includes being a bigoted racist. That sad fact is undeniable and this movie wouldn’t be doing anyone any favours by turning a blind eye to that and pretending it wasn’t true. However, to focus on Lovecraft’s shortcomings and all-but-ignoring his genius is a long way from fair to the man or his amazing stories.

Obsession with Lovecraft’s flaws aside, The Case of Howard Phillips Lovecraft‘s biggest shortcoming is that it’s just so dreadfully dull and boredom is the one truly unforgivable sin of any movie. And boy, howdy, is this film a sinner. With nothing interesting going on and the narrator’s monotone drone, this movie was a chore to sit through. Fifteen minutes into this documentary, I hit the display button on my Blu-ray remote to see how much time was left to go. At the 30-minute mark, I picked up the remote again and desperately wanted to hit the Stop button. Only my professionalism as a critic kept me watching this film. No, really, quit snickering. It also helped a lot that I was well-rested from a full night’s sleep and drinking a highly caffeinated beverage; otherwise, I’m sure sleep would have taken me. Yeah, I’m using a little hyperbole, but only a little.

Final Verdict: I hope I wasn’t too subtle or coy in this review about my true feelings for The Case of Howard Phillips Lovecraft, but just in case I was, let me be clear: I did not like it. While I applaud the filmmakers for trying new things, the end result was neither informative nor entertaining. If this was the only documentary on H.P. Lovecraft, I still wouldn’t recommend it. However, since there are two other, and far better, docs on HPL, do yourself a favour and watch one (or both) of those and give this one a pass.

The Case of Howard Phillips Lovecraft is available from Amazon.com.

Bio: Brian Sammons is an author and critic of dark things, and an all-around troublemaker. Sadly, you can’t follow him on Twitter because he abhors Twitter.