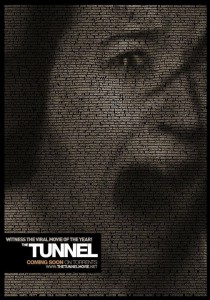 Hello, friends and fiends. I thought, this time, I’d shine the spotlight on a little movie that you may not have heard of, at least if you live outside of Australia. It’s a low budget movie from the Land Down Under that I heard a few promising whispers about, so I figured I’d give it a look. However, I’ve been burned one-too-many times before by indie darlings, and that goes double for foreign indie darlings that some just like to champion, in a weird and sad attempt to seem more worldly and “with it” than the other guy. I digress slightly, but the point is, I don’t hold anything against movies from foreign shores, but I don’t place them on a pedestal just because of their foreignness, either. I love many imported movies, but they all had to earn that from me. So, did this movie earn my praise, or was it like Curling – something strange and alien to me that I could care less about? Well, let’s find out.

The Tunnel is a found footage film. What’s that? You know, The Blair Witch Project, Cloverfield, Paranormal Activity, The Last Exorcism, and more are all found footage films. Some people call them “shaky-cam movies” and rightfully so. It’s the first-person, “You are there, in the middle of the action” viewpoint that some people love, others hate, and I am kind of partial towards, at least when it’s well done. Sadly, found footage films are the flavour of choice for many smalltime moviemakers, as it’s a heck of a lot cheaper to get a camera, or two at the most, and have your actors run around with them, than to get a full crew together. Because of that, for every one good found footage film that exists, there are a whole passel of bad ones. But again, I’m sort of a fan of these movies, so if you’re not, or if you’re one of those poor people who get sick watching this kind of flick, keep that in mind when reading this.

Our story begins with news coverage of global warming and how water is more precious than ever. In an effort to conserve H2O, lawmakers in Sydney came up with a plan to reclaim and recycle the literal lakes of water that have collected in the miles of abandoned and disused subway tunnels beneath their city streets. The plan went ahead with much fanfare, but then was quickly and quietly abandoned, just like the old train tunnels, themselves. So, a group of four journalists get together and sneak into the tunnels, to see if there’s a story down there to be uncovered. Well, naturally, there is, but not the one they were expecting.

The movie is told as one long flashback from two of the four journalists. I thought this was a bit of a bad call. Right off the bat, you know that these two will be A-Okay, no matter what peril the movie tries to put them in, because they are the ones telling the story. It also means that you can guess from the start that the other two reporters…well, they won’t be so lucky. Why a horror movie would do that is beyond me, as it goes a long way to killing both suspense and surprise. Admittedly, it does add an air of credibility to the story, as you could more easily imagine that, if the events in this film did transpire, this would probably be the way the story would be shared. Still, I don’t think the tradeoff was worth it.

The second misstep was that it took a good long time for any action to happen. The film crew doesn’t even make it into the titular tunnel until the 30-minute mark, or, about one third of the total film. Now, The Blair Witch Project was a slow burn too, and it took them a bit to get into the woods, but at least, there, you got a wealth of information and background history on its witch mythology, as its film crew interviewed all the colourful locals. Here, you just get a behind-the-scenes look at the politics of journalism. Frankly, I thought it was kind of boring. Maybe if I worked for CNN, I would have liked this more, but I don’t and so, I didn’t.

Now, don’t worry; this entire review isn’t all doom and gloom. In fact, the above two boo-boos are the only real faults I had with this film; it’s just too bad that they occurred back-to-back and before the good parts started. Once the quartet of intrepid investigators actually makes it into the tunnel, there’s plenty of good to go around.

But first, as this is a new movie, I want to make sure I give you a fair SPOILER warning. I don’t intend to give specifics away, but if you want the purest experience of watching this film for the first time, you might want to skip the following paragraph.

Once in the tunnels, an atmospheric, claustrophobic and downright icky vibe is quickly established, as the reporters showcase the forgotten bomb shelters and rat-infested bum warrens of the now-strangely-absent homeless population. All-too-soon, one of their number is taken, unseen and yet, almost right under the noses of the others, by some stealthy, scary thing. Not wanting to leave their missing friend behind, the remaining trio goes deeper into the manmade labyrinth looking for him. Unfortunately there’s something down there looking for them, too.

Wisely, this subterranean horror is never fully shown, with only tantalizing glimpses given of it. The only time it appears on screen for more than a few seconds, it is shot through the grainy-green filter of a night vision camera, so that specific details of the monster are kept hidden in the darkness.

Did the filmmakers do this to hide substandard special effects or to build suspense and tension? Well, whatever their original intent, they achieved the second part of that question handily. What little you can make out of the lurker is quite ghoulish (wink, wink, nudge, nudge to Lovecraft fans). It appears to be a tall, gaunt humanoid of inhuman countenance, grey skin, and luminescent eyes. More clearly shown is the incredible speed and ferocity of the thing, and its proclivity for scooping out and keeping eyeballs. Yummy. This, ladies and gentlemen, is a great example on how to make a truly creepy movie monster and it is more effective by far than a whole horde of CGI baddies capering on the screen for good chunks of the film.\

Our heroes, now lost in, and pursued through, the tunnels are well-portrayed by the actors. I don’t know how well-known they are in Australia. At a guess, I would say, not very, as IMDB doesn’t have a long list of credits for any of them, but for me they were all unknowns and that helped me with the suspension-of-disbelief factor. That, combined with the fact that they all do a commendable job, going from regular folks laughing and fooling around to terrified victims just looking for a way out of the mess they’ve gotten themselves in, was a great one-two gut punch. Eventually, some of the crew make it back to the surface and some don’t, but again, any surprise on who that might be is ruined by how this story was told. Even with that said, I completely enjoyed the ride this movie provided, once it actually began and despite knowing more about the destination than I would have liked.

Final Verdict: Not only was this an enjoyable horror movie, but it was surprisingly Lovecraftian. The obvious connection is to HPL’s story, “Pickman’s Model”, and that link is good and strong. But Lovecraft was a lover of the subterranean, with many of his tales descending into stygian abysses. The earth hides horrors and this is one of them, as memorable as any that HPL ever dreamt of. Found footage film fans rejoice. Aussiephiles start a’ dancing. Those gaga for ghouls get happy. The Tunnel is a good little film and a worthy addition to your home horror movie library.