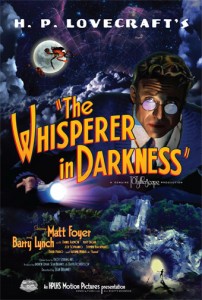 The HPLHS (H. P. Lovecraft Historical Society) is well-known in the circles of faithful Cthulhu cultists and for good reason: They really love Lovecraft and express that love in every way possible. They started off as a group of crazed LARPers (Live Action Role Players); then they started making professional-looking props for others to use in their own Cthulhu games. Not happy with just doing that, they started making t-shirts, hats, worship-worthy idols, and Lovecraftian knickknacks of all sorts. Still not satisfied with their demonstrations of devotion, they produced a series of radio plays of several of Lovecraft’s stories that, to date, are still the best ever made, not to mention a music CD of fishmen singing bluesy jazz tunes in Innsmouth. Then, in 2005, they said, “What the hell,” and made a movie based on “The Call of Cthulhu”, and it. Was. Good. But it was also short (only 47 minutes), very low-budget, and silent. Yes, the HPLHS brought silent films back long before The Artist did, but did they get any Oscar buzz? No, and that’s a travesty, but I digress.

The Whisperer in Darkness is the HPLHS’ second motion picture and, Great Lord Cthulhu, is it impressive how far they have come. It’s a full-length feature film and nearly an hour longer than their previous movie; it has sound; and, while still low-budget, it looks great and is incredibly ambitious. How ambitious? Well, they bought a biplane just for this movie. Yeah, try to name the last independent flick you saw that went that far; I dare you. So, add to all that the fact that this movie is exceptionally faithful to the original story and you have a film that all fans of Lovecraft have been dreaming for.

“But wait,” you say. “I don’t remember a biplane in HPL’s story.” Well, you’re right. The filmmakers changed a few things and made some additions to the original tale. However, before you grab the torches and pitchforks, and start chanting, “That’s not Lovecraft; that’s not Lovecraft,” relax. All additions or changes are well-implemented and add a lot to the story. But enough of the generalities. Let’s get to the specifics.

All of Lovecraft’s story is intact, starting with a series of heavy rains in Vermont causing the locals to notice the corpses of strange critters washing away in the swollen rivers. A farmer named ‘Akeley’, beset by the alien-looking beasts, writes to a professor at Miskatonic University for help. Said professor, Albert Wilmarth, doesn’t believe in such hooey, but he is a folklorist, and curious to boot, so he heads out to the wilds of Vermont to get to the bottom of the mystery. He meets up with Farmer Akeley, who’s acting very strangely, and before you can say, “Creepy alien invaders who practice un-elective surgery,” Professor Wilmarth learns how wrong he was to dismiss all those wild tales out of hand.

Now, I know you know what happens next, because you’ve read the original story, right? Yeah, I thought so, but here comes one of the added bits that I mentioned earlier that I really liked. The Professor Wilmarth in this movie is far more adamant about the strange stories being hokum than ever before. So much so that he even engages in a lively debate with none other than the champion of all things weird at the time, Charles Fort. While not a completely necessary addition to the movie, I sure enjoyed this bit and thought it went a long way in helping flesh out the professor character. That and it was just plain old fun.

Then there is the famous plugging-the-“jar”-into-the-machine part of the story. Now, I won’t say what’s in the odd jars, just on the offhand chance that you don’t already know, but this movie captures the creepiness and wonder of that moment perfectly. It also adds a few stylistic twists to make things a bit more lively, which was a wise choice, as jars by themselves are pretty boring. Also, the strange machine was especially well-realised.

And if I say, “The big reveal,” you know what I’m talking about, right? Yeah, it was the best and most memorable OMG moment from the story. You know, when Wilmarth learned…Well, I hate to say, just in case you have no clue of what I’m so vaguely hinting at. Trust me when I say that you’ll know it when you see it. That scene has two surprises here. First, it happens about halfway into the film, which means there’s still a whole lot of movie after it. Second, I was impressed at just how damn creepy it was. I watched this movie with a friend, who is not a Lovecraft fan and had no idea what was coming, and when “the big reveal” happened, she literally said, “What the hell?” in a hushed whisper. I cannot think of higher praise for that scene than that.

Lastly, there is the aforementioned biplane, which provides a far-more-thrilling ending to the movie than what was written in the original story. Yes, in that way, this film improves on Lovecraft, which is not an easy thing to do. Whisperer has the best scene with biplanes in it since the original King Kong and, even with this film’s low budget, it is pulled off very well.

I keep mentioning the film’s tiny budget because some of its limitations do show around the edges of this movie. A few of you out there may watch this film and hold that against it, especially when some of the more-ambitious CGI effects enter the scene. Such effects don’t look horrible – in fact, they appear to be on par with a lot of what you see in TV shows – but they are noticeable. If you watch this film just waiting to pick some nits, then they will be an easy target for you. However, if you can just sit back, go with it, and enjoy the excellent story, fine acting, good direction and impressive attention to detail, then you will get a whole hell of a lot out of this movie.

Now we come to the part of the review where I list the things about the movie that I did not like or that I thought could have been better.

Okay, now that we got that out of the way, time for the wrap-up.

Final Verdict: The Whisperer in Darkness is a hell of a fine film, one of the best adaptations of a Lovecraft story ever made, and it’s far superior to the vast majority of bigger-budgeted films that have “H.P. Lovecraft’s” before their titles. Whisperer is faithful to a fault to the source material. What changes it does make are very welcome and actually enhance the story, as opposed to just padding things out, like so many other movies based on Lovecraft’s short stories do. It is an obvious labour of love and, when movie makers care this much, it shows in every frame of the film. If you’re a fan of H.P. Lovecraft, then this is mandatory viewing. If you’ve never read anything by HPL and always wanted to see what all the hoopla was about, this is a great place to start to get a handle on his unique and genre-changing brand of horror. I thoroughly enjoyed this film and highly recommend it. If you would like to get a copy of this movie for yourself – and you really, really should – you can order the cool two-disc DVD directly from the creators at their website: http://www.cthulhulives.org.