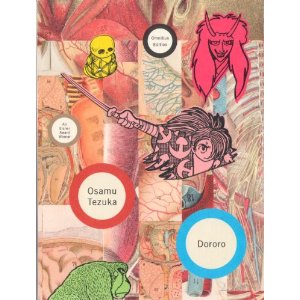 When I opened Dororo, I was overcome with feelings of childlike glee. If I’d been at a movie, I would’ve turned to the person next to me and said, “This is going to be awesome!” I wasn’t disappointed.

Lord Daigo’s quest for power leads him to a shrine on a dark and stormy night. Inside, he finds 48 demons and offers them 48 pieces of his unborn son in exchange for power. It’s a beautiful opening sequence, rendered masterfully in Tezuka’s usual iconic symmetry. Everything was perfect and I took my time, lingering over every panel.

Soon after, Lord Daigo’s son is born. We don’t get to see him, but we know he’s horrifying. Lord Daigo’s look of shock tells us everything we need to know. While Lord Daigo rejoices – the demons have granted his wish – his wife despairs; she knows who has truly been tainted by the demons. Against his wife’s objections, Lord Daigo wraps his son is blankets, puts him in a wooden tub, and, much like Moses, sets him adrift among the riverside reeds.

In the next chapter, we meet Hyakkimaru. He is Lord Daigo’s son, though, at this point, Hyakkimaru doesn’t know that. He dispatches several samurai in a storm of blades and death, and we learn that all of his limbs are prosthetic – and that his swords are hidden within his hollow, detachable arms.

After the battle, while walking across a bridge into a nearby village, Hyakkimaru saves little Dororo from a group of ruffians. Dororo is so impressed with Hyakkimaru’s prowess that he decides to follow Hyakkimaru, convinced that if he steals Hyakkimaru’s sword-arm, he’ll be unstoppable. Later, at a resting point alongside the road, Hyakkimaru tells Dororo the story of the kindly doctor who pulled him from the water and raised him. At first, the doctor was horrified – Baby Hyakkimaru resembled a fat worm with a skull-like head – but the doctor took him in, anyway. And after discovering that Hyakkimaru could see, hear and speak via intuition, the doctor made prostheses for him, replacing everything Hyakkimaru lost to the demons. Hyakkimaru and the doctor had a happy life, but, as Hyakkimaru grew from a boy to a man, his connection to the demon world intensified. After a demon attacked the doctor, Hyakkimaru decided to leave. It was time to go on his quest to defeat the 48 demons and get his missing body parts back.

While this sounds like a typical set-up for a story, it never feels typical. Tezuka is the godfather of manga, after all. There are echoes of Astro Boy in Dororo: A doctor makes a boy into a death machine. But we can forgive Tezuka for this; he’s only stealing from himself.

Hyakkimaru lives in a harsh and cruel world, and he is the perfect instrument for survival: an empty death machine with swords for arms and acid spray in his hollow leg. He seeks to fill this emptiness with hope and kindness, only to be blocked at every turn by violence, greed and demons. His prostheses make him look human. As he kills demons and replaces his prostheses with flesh, his humanity grows.

Dororo is the stereotypical gutter rat. A sarcastic, dirty, little thief who never does what he’s told. He’s the perfect instrument for survival, too, but in a different way. He takes beating after beating, is nearly killed by demons, and goes without much in the way of food and shelter, with no connection to other people besides his grudging relationship with Hyakkimaru, but he never quits. A strength born of hard living in an unforgiving world pushes him forward. Dororo calls Hyakkimaru “bro” (anachronistic and a bit cheesy – but I’ll get to that soon) and, at first, it’s delivered like a teasing nickname. As time passes, it takes on real meaning.

There are several anachronisms woven throughout Dororo. Characters make passing reference to dump trucks, space aliens, cyborgs, and even other manga creators. Tezuka likes breaking the fourth wall. This may make it look as if Tezuka isn’t taking his work seriously, but the gripping story and the artistic weight of every line show you how serious he is. And these moments serve to counterbalance the bloody slaughter and cruelty.

Several stories weave together to create a whole: Hyakkimaru’s quest, Dororo’s history as the child of famous Robin Hood-like bandits, a hidden map and a buried treasure, the poor rebelling against the self-important samurai. Each chapter has its own plot and advances the story, and it never grows stale. Situations change, characters grow, and we get a tour of the world – from deep in the mountains to a jagged cape of rock battered by the sea. I could recount the stories here, but you’ll be happier if you can discover them on your own, and Dororo is nearly 850 pages long, so you have plenty of discovering to do. Every chapter left me feeling full, but also propelled me gleefully into the next one.

There’s only one problem with Dororo. After a spectacular battle that brings most of the plotlines to a close, Hyakkimaru turns to Dororo, says good-bye, and walks away. The end. Several things are left unresolved. Hyakkimaru’s quest is incomplete, the treasure hinted at through so much of the book remains hidden, and the rebellion has only just begun. And why is the book called “Dororo”? Sure, Dororo is one of the main characters, but Hyakkimaru is the protagonist. Could it be that Hyakkimaru and Dororo’s journey prepared Dororo to lead the rebellion, to become a symbol of hope for the oppressed? I don’t know. This is a personal thing with me. I like answers and epilogues.

Even with the abrupt ending, Dororo still has a 9 out of 10 chance to wake Cthulhu from his eternal slumber. I’m happy to have Dororo on my shelf and I think I’ll read it again soon.