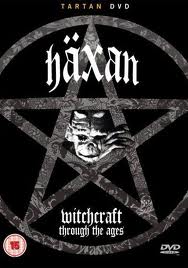 Haxan is a silent Danish documentary from 1922 about the history of witchcraft. That pretty much tells you everything you need to know about whether or not you want to see it. If you’re the kind of person for whom the words “silent witchcraft documentary” hold an unshakable appeal (as I am), then Haxan is a movie you need to check out. If not, then it probably won’t be for you.

The documentary aspect of Haxan is obviously dated and of perhaps limited utility to the modern viewer interested in the history of witchcraft (or, to be more accurate to the film’s focus, witchcraft hysteria), though there were some beliefs and practices mentioned in it that were new to me. What’s more interesting for a fan of film, or of the weird and supernatural, is the movie itself. Interspersed among the title cards and stills of antique engravings are reenactments of a variety of scenes, most interestingly for me those of the supposed witch’s sabbath, as imagined by an accused witch under torture. These and a handful of other, similar scenes throughout the film showed a visual inventiveness that is showstopping, to say the least. Innumerable famous stills have been drawn from these scenes, but there’s much more to be witnessed in the film and it all retains the ability to impress.

Surprisingly creepy effects are achieved by people in what look to be papier mache masks and other simple makeup, combined with ingenious lighting and sets. A scene in which a skeletal horse walks in front of the camera is both obvious in its simplicity and yet, somehow much more effective than a more complex or realistic effect would have been.

Many of the scenes in Haxan have the feeling of living dioramas (and there are some brilliant actual dioramas early on). The limited sets, like the skeletal horse, serve to make these glimpses into a half-imagined past more, rather than less, compelling.

The Criterion edition of the DVD also includes a version of the film with narration by William S. Burroughs, which is undoubtedly an adventure, though I haven’t actually seen (heard?) it yet, myself.

You can purchase Haxan from Amazon.com.

Bio: Orrin Grey is a skeleton who likes monsters. His stories of cursed books, mad monks, and ominous paintings have appeared in Bound for Evil, Delicate Toxins, and, of course, at Innsmouth Free Press, among other places. He can be found online at www.orringrey.com.