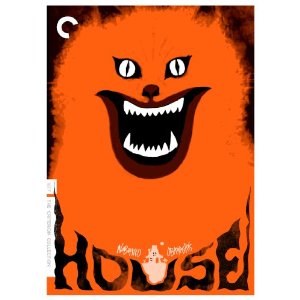 When I sat down to watch House (not to be confused with House or House), I expected to be disappointed. Not because I thought the movie would be bad, though that wouldn’t have surprised me, but because I’d been led to believe that it was one of the weirdest movies ever made and, well, whenever you’re given a bill of sale like that, it’s hard not to expect disappointment. Luckily for me, not only was House good, it was also just as completely insane as I had been led to believe. Maybe moreso.

See, whenever anyone talks about House, they always talk about all the weird stuff that happens in it. And oh, man, does weird stuff ever happen in it. A girl fights firewood, for example, and a man turns into a bunch of bananas for no real reason. The problem is, however weird that stuff may be (and it is very weird), nothing that actually happens in House is ever half as strange as how that stuff happens. The weirdness in House is more than skin-deep. The movie looks weird, it sounds weird, it’s shot weird. Everything about the filmmaking approach is basically unexpected and strange, which makes the crazy stuff that happens not really feel all that out of the ordinary by comparison.

There are music-video-like montage sequences. There are painted backgrounds. There are, well, pretty much everything. Maybe the place that the strangeness shows most markedly is in the special effects. The story concerns a bunch of girls – all of whom are named after their dominant character traits, so we get names like “Gorgeous” and “Sweet” and “Kung Fu” – who end up visiting the titular house where Gorgeous’s aunt still lives. Because this is a horror movie, things obviously don’t go well for them there. Once they’ve arrived at the house, things turn gory pretty fast, but the gore (like everything else about House) isn’t handled how you might expect. All the dismemberments are achieved through the use of collage effects and green screens. Other special effects are achieved through stop-motion or traditional animation. So, yes, sometimes, the characters are assaulted by cartoons literally drawn onto the frames.

I’ve seen House compared to the Evil Dead films, and it’s an apt-enough comparison in its way, but the two movies are also pretty different. Both have a kind of gory, slapstick tone, the action in both focuses on a single location, and both have a near-perfect nonsense mythology going on, but House is, frankly, way weirder than any of the Evil Dead movies ever even aspired to be. Even at their most absurd, those films never featured cartoon cats or people randomly turning into skeletons.

That House works as well as it does, not in spite of this craziness but because of it, is something sort of miraculous. There’s a kind of almost fairytale logic to even the film’s most random-seeming choices that almost always works. This might be because the director supposedly solicited his young daughter for plot ideas, or it might just be a sort of inspired madness. Either way, there really isn’t anything else quite like House. Or, if there is, I haven’t seen it.

House can be purchased through Amazon.com