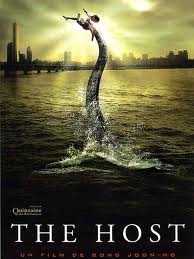 I watched The Host, back when it first came out and, in spite of the hype that surrounded it then, I didn’t much care for it. When it showed up on the movie list for Monster Awareness Month, I figured I’d give it another shot for this column. Unfortunately, I didn’t like it any better this time out.

I realize that I am vastly in the minority here, so there’s got to be more to The Host than I’m seeing. If you want a more balanced review, there are dozens to be found, praising the film all over the Internet. But it definitely wasn’t my cup of tea.

Which seems weird, because it’s certainly a monster movie. It opens with a morgue employee at a U.S. military base pouring about a billion gallons of formaldehyde down a sink drain on the orders of an arrogant coroner. The sink drains into the Han River and a few years later, a giant monster that looks sort of like an enormous, mutated mudskipper comes out of the river to wreak havoc.

This part’s fine. The monster isn’t the greatest creature design you’ll ever see, but it’s a winning combination of vicious and clumsy, stumbling over its own arms and crashing into things in its efforts to jam people into its mouth. And the attack is memorably staged in broad daylight, in a crowded area. The big problem for me comes in as we’re introduced to our protagonists.

The story follows a young girl who is taken by the monster but not killed. She’s dropped into a sort of feeding nest in the sewers and it falls to her hapless family to get her back. The problem is that calling them “hapless” is probably too gentle a term. They are an assortment of failures of one kind or another, inept in ways that are probably intended to be comic, but which I found just unendurable. I’ve seen a lot of people find in the foibles of the dysfunctional family sources of sympathy, pathos, and humor, but I just found them interminable. Maybe that makes me a bad person.

There’s of course more going on in The Host than inept families and voracious monsters. The film is full of unsubtle satire of bureacracy and U.S. military hubris. The satire certainly gives an added dimension to the film’s events, especially the outbreak hysteria that surrounds the revelation that the monster might be the host of a deadly contagious virus. But it’s not enough to carry the movie on its own and, since the character dynamics fell apart for me, the rest of the film is quick to follow.

As I said, I’m in the minority on this one, so your mileage is almost guaranteed to vary. But The Host definitely wasn’t my brand of river monster.

Purchase The Host from Amazon.com.

Bio: Orrin Grey is a skeleton who likes monsters. His stories of cursed books, mad monks and ominous paintings have appeared in Bound for Evil, Delicate Toxins, and, of course, at Innsmouth Free Press, among other places. He can be found online at www.orringrey.com.