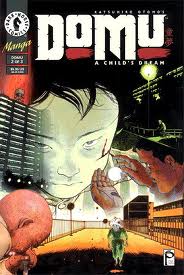 Domu begins with a series of mysterious suicides. People are jumping to their deaths from the roofs of the Tsutsumi Housing Project. When the police are called in to investigate, we are introduced to a varied cast of characters, through the eyes of Inspector Yamagawa:

Sasaki, a young man who’s been trying for years to get into college; Mrs. Tezuka, a woman who lost her child and now pushes an empty stroller; Little Yo, a hulking man with a cognitive disability; Yoshikawa, the abusive drunk; and Old Cho, a doddering old man who sits on a bench in the courtyard, watching the children play.

Much of the action of Domu takes place in that courtyard. It’s idyllic and crowded by day, but creepy and lonely by night. The housing project itself is huge, enclosing the courtyard in a complex of massive, wall-like buildings that are akin to a labyrinthine urban prison. The apartments are tiny and all of the walkways face the interior. The residents are closed off from the world. Even though the space is large, it has a claustrophobic feel.

Otomo draws everything with an architect’s precision. There are more backgrounds than I’m used to seeing in manga. Postures and movements are natural, making characters feel all the more human. Action is kinetic and exciting. Though the pictures are static, they are so full of energy that they threaten to animate themselves before your eyes.

One night, while pacing the courtyard and pondering the case, Inspector Yamagawa is drawn to the roof by a spectral voice. We learn who the killer is early in the story and he’s on the cover, so I don’t feel that revealing him now is a spoiler. Old Cho floats inches above the roof, his body festooned with the trinkets he’s stolen from his neighbors over the years – these trinkets are the very clues that lead the police to him later in the story. He reveals that he’s been murdering people with his psychic powers. It’s all just a child’s game to him. Old Cho himself is more child than man, and he takes great pleasure in watching people splatter on the sidewalk.

The murders continue until Etsuko moves in. She’s only a little girl, maybe five or six, but she’s already got as much power as Old Cho. Etsuko foils one of Old Cho’s murders before her parents are even finished unloading their moving truck.

And so, the battle between Etsuko and Old Cho begins, hitting its climax in a flying psychic battle that destroys an entire section of the housing project in a crashing wave of fire and debris. It’s one of the most exciting sequences I’ve ever read in a comic book. Ever. Side characters do battle, as well, pushed over the edge into insanity by Old Cho. Blood is spilled and lives are lost.

But Old Cho escapes at the end of the battle and is questioned by the police – who decide that he’s nothing more than a senile old man.

The single most powerful scene in Domu is the final battle between Etsuko and Old Cho. Subverting his earlier conventions, Otomo sets this scene in the crowded courtyard during the day. While children play, adults gossip, and construction workers rebuild the fallen section of the project, Etsuko and Old Cho fight. She from the swingset and he from his favourite bench. Objects around them shatter as they strain to destroy each other. None of the adults notices, but the children do. They gather to watch and lend their power to Etsuko. And after they shatter Old Cho’s mind, they run off to play another game.

While Otomo’s art is active – kinetic, even – and his buildings drawn with precision, the quiet character moments are what make you stop and stare. There are close-ups throughout the story that convey as much emotion as any actor in any movie. Of particular note is the two-page spread of Old Cho’s face during his final battle with Etsuko. The shock, the pain, the knowledge that his death draws near, are etched perfectly in the fine lines of his face.

Domu has a 10-out-of-10 chance to wake Cthulhu from his eternal slumber. It’s a perfect book. The only problem is, that it’s out of print, and hard to find – but worth the hunt.