[dropcap]H[/dropcap]ow many times can I use the word ‘awesome’ to describe this book before both you and I get tired of it? I have the urge to use it over and over again, but I’ll try to keep my urge in check.

I knew that Mobile Suit Gundam: The Origin, Vol. 1 – The Activation was awesome before I even took it out of my mailbox. Something about the thickness of the package, and the weight of it in my hand when I pulled it out, told me everything I needed to know.

When I slipped it out of the envelope, I was struck by its cover. The velvety-smooth surface, the padded thickness, the subtle watercolor look that softened the edges of Mobile Suit and the wreckage in the background, all of it thrilled me. And I hoped that its contents lived up to the promise of the cover.

Vertical, Inc. takes its manga seriously. Treats it like literature. Like many classic literary works, this classic work of manga comes with a scholarly introduction that explains the genesis of the series and the eventual publication of the volume I held in my hands. It is followed by two more essays – one by the publisher of the original Japanese publication and one by a Gundam superfan.

The opening pages are colored with the same watercolor subtlety as the cover. They quickly and clearly tell the backstory. Several modern manga creators could take a lesson from Yasuhiko. I find the first few pages of most series confusing and jarring. They too-often attempt lyricism when a simple introduction to character and direction would do better.

Mobile Suit Gundam: The Origin tells the story of the future of humanity. A time when the excess population takes up residence in Earth’s orbit, building their settlements on the vast, curving inside surfaces of giant cylindrical colony ships. Years later, the colonists in the cylinder farthest from Earth, Side 3, declare themselves the Principality of Zeon and begin a war of independence against Earth Federation.

Battle after battle take place as the Principality of Zeon try to discover the secret of Earth Federation’s new Battle Suit technology: The Gundam RX-78. The battles range from distant orbit in Side 7, to Luna II and into Earth’s own atmosphere. So many battles, but they never get stale or boring, because Yasuhiko is a master. The camera angles vary, as do the fighting stances and strategic maneuverings of the Battle Suits. The battles feel visceral because Yasuhiko draws the Battle Suits with loose, human posture. I felt the danger the pilots risked because their movements were reflected in the movements of their Battle Suits.

Most of the fights center on or around Amuro, the protagonist, and Char, the Red Comet of the Principality of Zeon. There’s so much action in 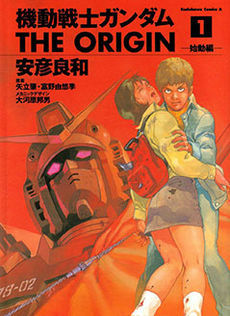 this book that it’s hard to know where to begin. Normally, this would put me off a book. Too much action edges out character and consequence, but I never felt that with this book. I never lost my connection to the people and what they were going through.

The invasion of Side 7 that kicks off the volume is pretty intense. Six Principality Zakus, the name for their mobile suits, infiltrate Side 7 with orders to investigate rumors about new Earth Federation technology. Things go wrong and they end up in a rather long fight that leads to the destruction of Side 7. Yasuhiko draws vast vistas of destruction as the Zakus trade blows with the Gundam RX-78s and missile launchers, all while the citizens of Side 7 run for their lives. Some of these citizens escape Side 7, but life only gets worse when they become refugees on the Earth Federation ship White Base, and are continually pursued and attacked by Char and his Zakus.

Yasuhiko’s art is gentle, but precise, and cartoonish, without ever losing its strong sense of design, posture and movement. Evidence of this is easily seen in his tight shots. His characters are alive with motion and emotion, and his backgrounds never have that empty feel that so much modern manga has. But you can still see his strong sense of design and natural posture in the long shots. Tiny tanks in transitional panels take on an almost animated feel as they roll across rubble and explode. And tiny people running for their lives, or crowding into the sections of the White Base set aside for refugees, never lose their sense of shape and character. Yasuhiko takes his time with everything. He’s not Geoff Darrow-level obsessive or anything, but I was still impressed.

You have to read it to see how awesome it is. There isn’t a wasted panel or a wasted detail. The storytelling is fast and dynamic. I felt like a kid who’d plopped down in front of the TV on Saturday morning with a bowl, a spoon, a gallon of milk, and a box of Cap’n Crunch, watching cartoons eighties style.

Mobile Suit Gundam: The Origin, Vol. 1 – Activation is, for lack of a better word, awesome. It has a 9 out of 10 chance of waking Cthulhu from his eternal slumber.