Old City Blues by Greek cartoonist Giannis Milonogiannis flows across the page in a high-tech, herky-jerky jangle, like a techno Tom 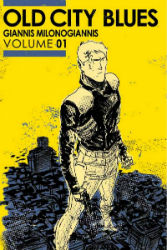 Waits song. His lines cut sketchy angles across the white paper, drenched in fat black lines and grayscale. I was instantly charmed.

The book itself is a heavy hardcover, jacketed in bright yellow. Its protagonist stands defiantly under the title, clutching a pistol in one fist and nothing but anger in the other. And the pages within are of a heavy-gauge paper. Thick and easy for a sausage-fingered man like myself to turn, making it feel more like a book than a comic. Solid. Official. I don’t think it’d stop a bullet, but I’m sure it could stop a knife…and maybe a sword. Archaia is all about production value.

Detective Solano drives the streets of Athens in a low-slung, chunky sports car. Milonogiannis loves to draw this car. Loves to show it careening down the streets, taking turns at high speeds, tires squealing. There’s more than one car chase in the story and Milonogiannis is one of the few artists who can illustrate the kinetic action required to make car chases work on the page.

All of his action is phenomenal. Fast-paced and perfectly choreographed. Every camera angle, line and design carefully chosen to enhance both the story and the excitement.

The story centers around Solano’s investigation of Hayashi’s murder. He’s the founder of the Hayashi Corporation and a cyborg, but still technically a person. And not one of those boring human-looking cyborgs either, more like a manga-inspired robot. All of the art has a Euro-manga feel. As does the story. There are echoes of Blade Runner, but the works of Katsuhiro Otomo and Masamune Shirow are in evidence, as well.

As the story progresses, Solano is matched up with the mech division (the Mobile Guns) of the Athens PD, and we are introduced to officers Thermidor and Newberg. We get some groovy mech battles, to go along with our car chases and our rooftop hand-to-hand battles, and the interactions between Solano and Thermidor give us most of our character moments.

There’s a lot of action; most of the story centers on it. But there are enough quiet moments – conversations, cups of coffee and camaraderie – to make the story work.

The city of Athens is like a character in the story. New Athens stands above, with its art deco high rises and elevated freeways, and the Old City lies below, with its crumbling buildings leaning into each other. A flood destroyed the Old City. Hayashi Corporation helped to rebuild it, so Detective Solano needs to tread carefully during his investigation.

Though Milonogiannis’ character designs are simple, everyone looks different. I never got confused about who was who. Subtle differences in facial shape, body style, and manner make the characters distinct.

Their personalities are different, too, but not by much. It’s one of the few weaknesses of Milonogiannis’s work, but this is his debut graphic novel, so he has time to develop this skill. Another weakness lies in the story. Sure, there’s lots of action, and just enough character development to make Solano and his cohorts seem like people, but the story rarely ventures deeper than the rather basic plot. This often bothers me (See my review of Dogs: Prelude for an example), but something about Milonogiannis’s execution suggests that there is more to Old City Blues than what’s on the page. A hint of the depth to come in Milonogiannis’ future work, maybe. I look forward to reading it.

Old City Blues is worth your money and your time. I plan to read it again and pass to it along to friends to see what they think. It has an 8 out of 10 chance of waking Cthulhu from his eternal slumber.