The “Haunted by the Arts” Ghost Walk occurred on October 19th this year in Nashville, NC. This town is the original Nashville, named after the unfortunate General Francis Nash. He was one of the few major Revolutionary leaders to actually die in battle during the War. Some twenty intrepid ghosts, goblins and ghouls set out to frighten the pants off Nashville and scare up a little revenue for the local Nash Arts Council.

I am interested in local folklore (and slowly accumulating material to write a book on the subject, since there isn’t any for non-coastal eastern NC, as far as I can find). I also firmly believe that much lifelong interest in horror and dark fantasy starts early and is rooted in, even fed by, a fascination with the lore in one’s own hometown. That’s where we need to start feeding it.

I had therefore been looking for a local ghost walk to participate in, or at least visit, when I heard about the Ghost Walk. I hadn’t had much luck until this year with finding events in the immediate area, aside from a few haunted hayrides down in Wilson and Elm City, and the usual Bible Belt Hell House. This year, I hit paydirt. Not only did I hook up with kitty shelter commandos from Wake County, who help those of our genre comrades preparing for the inevitable zombie hordes, but I also discovered the Nash Arts Ghost Walk, as well as a “Real Haunted House” in town.

The Ghost Walk has been around sporadically since 2008, but has foundered on a lack of volunteers. This year, for example, required at least twenty people to run six stations. There had originally been seven stations, but we couldn’t work out the logistics, which included things like small explosions, for the seventh.

The stations all represented legends, which fell out into local, state-wide, or universal. In the first category, we had “The Last Hanging in Nash County.” The script was researched and written by local playwright Jim Lee from a real-life case of two criminals who reputedly came back to reprise their evil deeds beyond death. Also in this category is the tale of two little girls who identified those about to die by singing to them, “Jesus loves me, this I know.” Eventually, the girls predicted their own deaths by the same method.

In the second group, we had a story about the infamous 18th century pirate Blackbeard and a woman he forced to marry him, as well as the “lost” station, which was about a man who lost his head while working for the railroad. Both legends come from the Carolina coast. Though the seventh station was inspired by the coastal Maco Light, there are also local variations of headless ghosts who suffered fatal encounters with railroads. Thanks to King Cotton and the tobacco industry, there are a lot of railroad tracks in North Carolina and there have been many fatalities over the years. Unfortunately, none of the tracks in town were close enough to the renovated church that houses the Nash Arts Council to be used.

In the third category, of course, we had to start out with a ghost-in-the-attic story. If you have an old church, you’ve got to set a ghost story in it. Also in this group were the two I wrote, “Buried Alive,” and one about the Lady in White (La Llorona) legend, based on the historical (1950s) variant of the “Letter Sweater.” “Buried Alive” and “La Llorona” have local variants, as well. An indie horror about La Llorona was even filmed recently in nearby Rocky Mount. I chose to do a more fictional version of them, to make it easier to stage them in line with the costumes and materials available to us.

I got the gig of being the storyteller on the Lady in White station. My partner in ghosting was Amanda, who had to put on a snug white vintage wedding dress and creep through a graveyard in high heels while I told the fell tale.

Amanda came up with a good jump scare at the end in which she looked up creepily while a footlight shone on her face and then said, “Boo!” to the gathered audience. It was very effective. Fortunately, it was warm, though it kept threatening to rain all night. Amanda was a good sport about it all, despite having a very stiff and uncomfortable outfit. The atmosphere was enhanced by solar lights that some mourners had put on the graves. The creepiest were little butterfly lights, which appeared to move as they changed color.

Just a ways down from us was “Buried Alive.” Through the vagaries of victim – sorry, participant – recruitment, that station was manned completely by teenagers. Teenagers who were horrified to discover I had given them all lines to share, inspired by the two gravediggers in Hamlet, and including two jump scares in short succession at the end. They quickly got into the spirit, though. We soon heard them having a good time scaring people, with a hapless young man (the victim of tuberculosis-induced catalepsy) trapped in a coffin and his friend leaping through the crowd to try to let him out.

They had a scare of their own just before the tours started, though. A local police car came by, suspicious about a group of boys dressed like Goths with a coffin in front of the cemetery two weeks before Halloween. The most amusing part was when another cop car showed up and law enforcement came over to ask us to vouch for the boys. Keep in mind that we were standing in the middle of a graveyard, Amanda in an antique wedding dress and me dressed entirely in black. Fortunately, the organizers of the tour showed up and cleared the boys with the police. Crisis averted, the tour was able to start on time.

After the last tour passed through, we ghosts and ghouls followed them in a growing crowd, so we could get a glimpse of the remaining stations. The two singing girls were definitely eerie in a Ringu sort of way, but the tour saved the most spectacular station for last. This was the Blackbeard story and it was quite the light show.

Sadly, I didn’t get a chance to see the Real Haunted House I mentioned above, but I’m going there next year. Just goes to show what spooky happenings you can find in your own backyard if you only … dig a little. 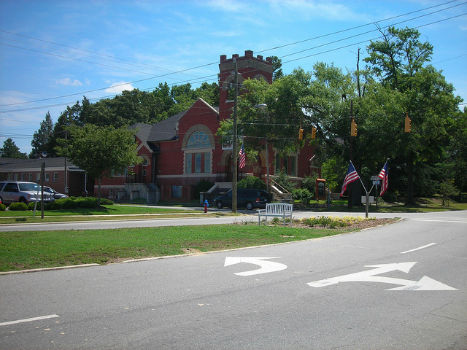