A young herbalist, Xu Xian (Raymond Lam), falls in love with a kind young woman, Susu (Shengyi Huang), after she saves him from 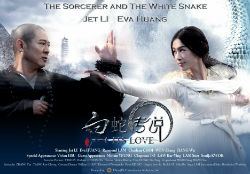 drowning. Complications ensue when the stern demon hunter, Abbot Fahai (Jet Li), informs the young man that Susu is really a powerful, thousand-year-old demon known as the “White Snake,” and does his level best to break them up. Meanwhile, her mischievous sister, Green Snake AKA QuingQuing (Charlene Choi), is also finding love with a monk, Neng Ren (Zhang Wen), who is slowly turning into a bat demon after being bitten. But will any of this end well?

Based on an old Chinese myth that has been filmed several times already, The Sorcerer and the White Snake came out last year overseas, but debuts in the U.S. today. It is fairly typical Chinese fantasy fare, in that it is full of wirework martial arts, CGI, a sickeningly sweet love story, comic relief, and reactionary moral absolutism. If that’s your thing, you should enjoy it. It’s certain no worse than the recent Conan remake.

Which is not to say that it’s great. You know the filmmakers are probably not getting their intended message across when you cheer on the destruction of the “good guys”‘ holy monastery and are disappointed when the “hero” survives the film. There are some pretty images (I’m easy on cheap CGI if the imagery is interesting and evocative) and Huang as Susu is very affecting, but she is not the hero. She’s not even really a tragic heroine. No, she’s actually the villain. Her love for Xu Xian is cast by the grim Abott Fahai as vampiric and destructive, despite the several selfless acts she does on her lover’s behalf throughout the film. This is, by the way, a flip on the usual story in the legend, where Susu is a tragic heroine and Fahai is the villain, even an angry rival.

The main two problems are that Susu appears to be doomed to a loveless existence (due to the rather stupid and oft-repeated statement that “heaven” has decreed that demons and humans can’t interact, except, according to the very end, when they’re just friends and both male) and that Jet Li is playing Abbott Fahai. The latter fact means that Abott Fahai gets to be the Hero, even though he’s a cruel and a bigoted meddler who causes much destruction (He actually realizes this toward the end, but that doesn’t stop him in his course). Fahai is also so incredibly overpowered that there’s never any doubt he can overcome every supernatural force that attacks him, no matter how terrifying. Fahai claims that this is a sign of favor from heaven, but that’s rather iffy. It’s not as though Fahai ever just stands by and lets events play out the way heaven want them, and his actions and decisions create a great deal of chaos and suffering.

As for Susu, she appears to be doomed simply because she is supernaturally powerful, female and in love. I was surprised to see comments on IMDB that it was a different take that the lovers were not able to stay together at the end. Really? I’d like to see these films where the immortal woman with strong supernatural powers gets to fall in love, and keep both the powers and the guy. Susu’s fate at the end is really more common than a happy and empowered one. Just look at films like Bell, Book and Candle, or I Married a Witch, where the female lives, but loses her powers and freedom for love.

What with the use of “In the Hall of the Mountain King” from the opera Peer Gynt (another story in which a supernatural women gets short shrift from the hero) in one scene between the lovers and the inversion of heroes and villains from the traditional tale, I can’t help wondering if the script was trying to imitate some of the good old-fashioned misogyny of European fairy tales rather than of Chinese myth. I’m sure there’s plenty of that in the latter, but Doomed Good Witch really seems to be more of a Western trope. On the other hand, another IMDB user made the intriguing suggestion that this kind of Chinese fantasy movie reflects a reversion to the reactionary imperial class system where everyone knows their place and must stay in it.

Not helping is that the male romantic lead can’t act especially well (or that Jet Li looks dour and as if he’d prefer to be anywhere else but in this film). I bought Susu’s love for Xu Xian, including her strenuous attempts to save him from the start, but I had a much harder time with Xu Xian. And this is a guy who gets himself possessed to save his love. Then again, it probably doesn’t help that he keeps getting amnesia at inconvenient moments, making him very much the male version of a Damsel in Distress. But that’s what happens when your Romantic Hero’s very first scene evokes The Sound of Music.

The snarky Anya-and-Xander-style affair between QuingQuing and Neng Ren is funny and sometimes touching, as she rather brutally tries to teach him how to be a demon after persuading him not to kill himself, but it’s never the main event. Most of the interesting character development occurs in the first hour. The last third of the film is balls-out CGI – sorry, action – and that’s really not a good thing. Lots of screaming and flailing around, and Jet Li trying to look as though he’s doing real martial arts against actors playing superhuman creatures who would shrug any of that off if they were real. I kind of liked the snake effects, though.

Ultimately, this is an okay action film in the Sword and Sorcery genre that is neither made nor set in Europe – and is reasonably entertaining. But I can’t say it’s a classic, either.