[dropcap]G[/dropcap]hosts are monsters of human connection, links to the dead and their past, their grudges and obsessions, crimes and appetites, and sometimes their affection. Belief in 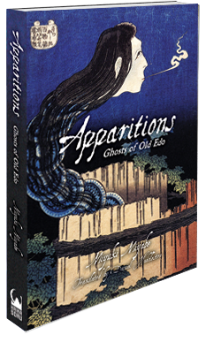 ghosts and interest in stories of ghosts is so universal and strong that, of course, they are often thought to be creatures of fact and not just fancy.

In the Anglophone tradition, as shown in R.C. Finucane’s Appearances of the Dead, real ghosts evolved from gibbering about tombs in the Classical era into the … uhh … shady shades (demons? delusions? spirits of the dead?) of early Christianity. Then came the allegedly tortured souls that were grist for theological debates about Purgatory during the Reformation. Next came the worldly spirits of the English Restoration. They dwelled on debts and honor and revenge and their heirs. Finally, we got the rather thick ghosts of the Victorian era who were there to morally instruct us, with their vague statements, that an afterlife existed.

Personally, I like my ghosts enigmatic and unreasonable. That’s why I’m fond of the Japanese ghost story as seen in the movies Ringu, Ju-On, Shikoku, Dark Water, and Kwaidan. So, I was interested to read actual Japanese ghost stories.

Does Miyabe deliver enigmatic and unreasonable ghosts? Sometimes. And, sometimes, the forces at work in these nine stories aren’t even what we would definitely call ghosts but more mysterious forces.

Are these horrifying tales of madness and psychic contamination in the manner of the J-horror movies above? Sometimes. But there is always a familiar, captivating humanity, a gentleness to these tales no matter the sometimes horrific fates of their heroes and heroines. They often seem, even when Third Person narrates, to have the warmth of personal reminiscences or twice-told tales. They wander through the common details of life at a leisurely pace.

Are they, for better or worse, thoroughly Japanese? Yes and no. In his introduction to the collection, “horror critic” Masao Higashi notes Miyabe has staked a literary claim to a “borderland between mystery, horror-fantasy, and historical fiction.” She also has a wide-ranging knowledge of Western horror, and he notes specific European, British and American stories Miyabe’s stories play off, sometimes with only a line or two. These are not stories one would expect of historical fiction set in Japan. There are no samurai characters – barely, in fact, even a mention of samurai. These stories are inhabited by orphans and poor servants and employment agents and salesmen, the working and middle class of Edo AKA Shogunate-Era Tokyo. There is only a smattering of criminals, though one story does feature a sub-genre of Japanese mystery stories, the Edo thief-taker.

In many ways, the struggle to make one’s way, to provide for yourself and family, to honor work and social commitments, even to make the best of an arranged marriage, are universal-enough struggles to unbind the stories from any time and place. To be sure, there are details of mourning and Buddhism and Shinto purification rites, which may seem a bit puzzling to the uninitiated. However, while Haikasoru does not add explanatory footnotes for such things, unlike the other main publisher of translated Japanese weird fiction, Kurodahan Press, they really are not missed. Higashi’s introduction, seemingly written for the original Japanese publication, is more mysterious in its allusions to a Westerner than any of the actual stories.

And what of the actual stories? As befitting a writer of mysteries, much is concealed in each tale until the end. One must tread their path the first time to behold the elegance of their revelations. And one can walk the path again just to appreciate the path. Their beauty is not so much in the skeletons of plot and concept as in their supple movement.

So, I will be briefly enigmatic in their descriptions.

In “A Drowsing Dream of Shinju,” a young boy finds his way as an apprentice at a cloth wholesaler, its reputation tarnished by its association with fashionable double-suicides of lovers. “Cage of Shadows” is one side of a dialogue explaining, in varying ways, the death of a family and the destruction of its business. In “The Futon Storeroom,” a young girl takes over her dead sister’s job and waits for a dreaded punishment. A young man thinks back on his troubled relationship with his insane sister, who has just died in “The Plum Rains Fall.”

Sometimes, friendship is found in the oddest of places, as shown by “The ‘Oni’ of the Adachi House.” A mysteriously mute orphan boy cries out when he sees “A Woman’s Head.” A naïve young woman seeks advice in “The Oni in the Autumn Rain.” Why a servant girl has suddenly gone crazy and attempted murder is the mystery in “Ash Kagura,” a thief-taker tale. Insightful, sad, and gruesome, “The Mussel Mound” is a sort of farewell to old Edo.

These stories are the spectral equivalent of an Ozu film: intimate stories of the dead and demonic connecting with the living.

Listen to the gossip and the ghosts, the fiends and the families. You won’t be sorry.