Unless you’re Welsh, I doubt you’re going to like this book.

All right. That’s a bit strong. I don’t think you’re going to like all this book unless you have very 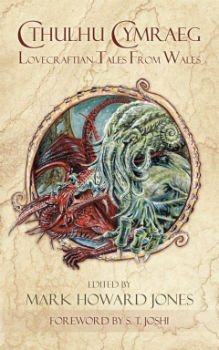 catholic tastes in what constitutes Lovecraftian fiction. On the flip side, I am almost certain you’ll find something to like in this book.

Arguably, the title is rather redundant. As S.T. Joshi’s foreword argues, H.P. Lovecraft owed an immense debt to Wales as channeled through its son Arthur Machen. It wasn’t just that Lovecraft took the idea of Machen’s little people, ancient beings not entirely pushed off the world by man and surviving in out-of-the-way places, or that some of his plots seemed to have inspired certain of Lovecraft’s tales. Even Machen the person may have been the model for a Lovecraft character, the detective Thomas Malone in “The Horror at Red Hook.”

The entrance requirement to the anthology was to be Welsh or at least to have lived in Wales. The types of stories range, in the words of editor Jones and Steve Upham, from “adventurous absurdism, punishing post-Modern puns, hallucinogenic horror, or good old-fashioned gooseflesh – or anything in between.” As far as I can tell, every story has either a Welsh character or a Wales setting. Welsh food and folk traditions find their way here and, as you would expect, many stories feature some kind of musician.

And all the stories are Lovecraftian – either of the monster-name-dropping sort or just thematically.

A composer decides, recovering from a nervous breakdown and suffering tinnitus, to go to a small Welsh town to recover in “What Others Hear” by John Llewellyn Probert. The church that is going to employ him as an organist has a very strange painting. Do I have to add that a quiet break from hectic city life is not in the cards? A fine mixture of Lovecraftian elements without Mythos name-dropping.

Rhys Hughes’ “The Bicycle-Centaur” must be of the punishing post-Modern pun variety mentioned because its narrator, the bicycle-centaur, is kicked out of a university that already has too many monsters. In his wanderings, he meets the father he never knew. Said father just happens to be undertaking raising Ootoo (“one of the old ones”). Despite the name-dropping of several Mythos gods, this one had none of the flavor of Lovecraft, just a lot of puns. Not really a worthwhile trip for me, but you may feel differently about the excursion.

“The Cawl of Cthulhu” from Bob Lock is kind of about the Welsh dish of cawl, a broth. Its hero, who has retreated from his London archaeological studies back to his hometown in Wales, decides to check out the legends surrounding the ruins of a local cottage known as the “Bullion Barn.” Rather a middling story for me, both in its Lovecraftian elements and my enjoyment.

I liked editor Jones’ own contribution, “Pilgrimage,” more. For some reason, I respond to Lovecraftian creepiness in English train stations. (Steve Dempsey’s “Breaking Through” from Shotguns vs. Cthulhu had a scene in a train station.) From the moment its narrator is told to go to Platform Zero, I knew no good was going to come of this trip. Add the strange sights within and without the train, and what seems to be a guilty secret of the narrator, and you have another story I thought effective.

Brian Willis’ “Song of Summoning” is a nice historical piece and the story of yet another musical composer choosing the wrong location to get away from it all. This one has a mock-academic frame to its 1801 setting. The composer’s diary relates his experiences with a strange Welsh lake and the music he begins to hear.

Charles Black’s “The Necronomicon” is, as you might expect from the title, sort of a back-to-basics Mythos story or, if you are less charitable, something of a gimmicky one. Black reminds us of a possible meaning of that blasphemous book’s title.

In some ways, stylistically and thematically, Liam Davies’ “Un-Dhu-Milhuk Would (If He Could)” is the standout piece in the book. Told through verse and drama and straight-out prose, this short piece – the shortest in the book at only five pages – mixes history and Welsh coal mining with the love life of Cthulhu’s son, the titular Un-Dhu-Milhuk. I quite liked it.

Physicists and mathematicians are, of course, a population at risk in many Mythos tales. Walter Gilman of Lovecraft’s “The Dreams in the Witch-House” came to a bad end in his mathematical studies. Likewise, the physics professor of Paul Lewis’ “Periphery” has started to see something out of the corner of his eye. And he wakes up with wounds on his arms. And he’s started to see an island off the shore – an island that doesn’t exist. Will his brother be able to save him?

Another of my favorites was “Strange Crossings: Reclaiming the Lost Lands” by Adrian Chamberlain. Mixing real locations (the Bunkfest music festival in Wallingford, UK) and real Welsh folklore (dragging a horse skull about at midwinter to beg for food and drink), the Lloigor from August Derleth, and a rock band mixing Tibetan chants and Welsh folk music), it’s the tale of a bookshop owner making an unfortunate acquisition. There’s even sort of a nod to Machen with the appearance of a nasty white powder.

Only one of the nine stories fell under the blah category for me. I hope Welsh writers continue to reconnect with the Lovecraft tradition their country helped create. In the meantime, we have this worthwhile anthology.

You can find Cthulhu Cymraeg: Lovecraftian Tales from Wales on Amazon.com.