[dropcap]A[/dropcap]s the cover blurb says, “There are worse things than the dead.”

Here, that would be the first two batches of characters we meet. The first are the Norsemen: “…born killers, once unaware of their true 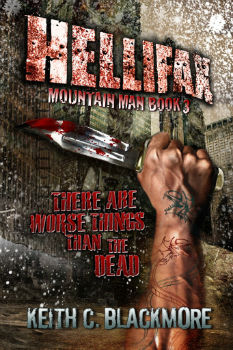 potential, which had been unleashed after the fall of civilization.” This hairy, tattooed crew is completely unfazed by the undead. They relish meeting them, fanning out in a line and unleashing their fury on them with a barrage of bullets and chains and knives and clubs and brass knuckles. They’re traveling across eastern Canada on a recon mission for some shadowy, even scarier group in the west. And when they’re not on the road or killing zombies, they’re raping, torturing, killing, and eating the few human survivors they come across. And woe unto the gang member who is insubordinate to their leader, Fist.

The second party is the gun-toting Tenner, a man whom the bland FBI term “serial killer” just doesn’t quite fit. He’s a good old-fashioned psycho killer. We first met him in Mountain Man. (Now would be a good time for you to avert your eyes from the rest of this review if you can’t handle spoilers for the earlier books.)

They’re all heading for Halifax, Nova Scotia, which just also happens to be the destination for Scott, who barely escaped death at the hands of Tenner. Scott also wants to avenge his friends, whom Tenner killed. You just know that before the book is done, they are all going to meet up. The only questions are which killer will best the other and will Scott live through it somehow?

As usual, Blackmore does an excellent job cranking up the tension and staging his action. He both builds on previous novels and adds to his zombie lore. So, the zombie rats of Safari (Mountain Man Book 2) are here, but Halifax is so packed with the undead, compared to the other places we’ve seen, that they behave differently. To his credit, Scott comes up with a new anti-zombie defense.

He also meets up with a group of survivors in Halifax, which is good, because, while Scott is a sympathetic character and has his self-appointed mission of vengeance on Tenner, he’s just not as interesting by himself as Gus the Mountain Man is. One of those survivors is Amy, who turns out to be one of those warrior babes I’m pretty tired of. (Her big climactic battle came pretty near breaking my credibility, given her foe.) Fortunately, she’s also smart and knows a lot of stuff – including agricultural science – which is mighty useful if the survivors in Halifax, and another group of humans they want to meet outside the city, want to follow through on their plans of forming a colony on a zombie-free island.

Surprisingly, given the earlier books, the characters are the weakest part of this story. Scott is fine, and so are many of the Halifax survivors, but I could have done with fewer glimpses into Tenner’s headspace. Sometimes, madness is better glimpsed obliquely.

That said, I still liked a lot about the book: the pacing, the human villains, the action, and the use of many interesting Halifax locations. Blackmore also opens up his zombie world a bit with this book and shows a little more about the state of affairs post-zombie, as well as glimpses of the final, losing battle fought against the zombies in Halifax.

The ending is unconventional enough that Blackmore has an author note explaining why he violated expectations. It’s not that he plans on a sequel, though there are a few plot threads hanging that could be used for one. He just liked his ending better and I agree with him.

If you’ve traveled this far in the series, you’ll want to slop on the zombie grue and venture once more into the zombie breach that is Hellifax.

You can buy Hellifax (Mountain Man Book 3) from Amazon.com.