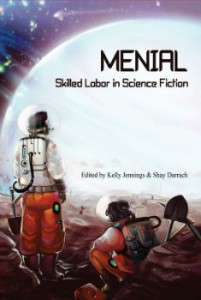 [dropcap]W[/dropcap]hat I wanted from this anthology was what I call “a day at work” stories, science fiction tales that don’t have the usual glamorous and exciting heroes: scientists, cops, criminals, diplomats, hackers, doctors, and engineers. I wanted people, as the book’s blurb puts it, “who understand and maintain the building blocks of civilization,” people who maintain the machines and buildings and infrastructure around us. I got some of that, but most of these 17 stories fit in other categories. There are the hard workin’, hard lovin’, and hard livin’ stories which center more on relationships than the job. And there are stories that deal with exploitation and “the high human cost of labor.” There’s even one tale of a very Lovecraftian work place.

The authors of some stories color, I think, too far outside the book’s thematic lines. None of the stories attempts any serious extrapolation of what technological and economic forces will do to human skilled labor in the future. That said, let’s get down to nuts-and-bolts.

There’s a bit of a contradiction in the book’s title. “Menial” often connotes unskilled labor. It also denotes those of the lower class, often said to be exploited. Sixteen-year-old Lize, heroine of Barbara Krasnoff’s “The Didibug Pin,” fits that category. She works and lives in one of those bad company towns. She owes the company store for the medical debts of her mother, dead four years and killed, perhaps, by too many stings from cliffclimbers, snail-like animals whose true use is unknown to the women who harvest them. Now Lize finds herself, possibly, on the same path to an early death. She must decide whether to believe a story she heard eight years ago about the possibility for a life offworld and away from the company. I liked this story and the idea of workers risking a slow death for reasons alien to them.

“Sarah 87” from Camille Alexa is sort of another exploited worker story. The exploited aren’t the android sex dolls with minds of “dead vacant emptiness” that staff the brothel on the asteroid where the story is set. It’s their customers. The alien Antholos set up the mine and brothel to harvest sperm from the miners and use the genetic information to improve Antholos warriors. But not all the “losers and loners” on the station are men. One is a woman who has fallen in love with one of the androids. Her isolation and loneliness and need are so strong they justify the craziness at the end. I liked this one, too.

The young protagonist of “Carnivores” by A.D. Spencer isn’t exactly exploited. Legally, he shouldn’t even be working. He’s supposed to be in an institution, since he is a “Lo-G” baby and they frequently have mental deficiencies. He works on a fishing vessel on Europa. (There is a surprising number of fishing-in-space stories in this book. The influence of all those Alaskan fishermen on cable TV?) He begins to suspect the “fish” may be sentient. Spencer delivers a sting at the end, which violates the comfortable, common cliché that only humans can exploit other sentients. I quite liked that.

It certainly wasn’t the humor or the basic premise – human-animal hybrids (here courtesy of the “Russian Affront of 1974”) – that caused me to dislike Andrew C. Releford’s “Urban Renewal.” And its hero is a barista. It was its tired theme of racial discrimination. As a local movie critic remarked years ago when reviewing Alien Nation, “Science fiction fans already know it’s not cool to be racist.” But, apparently, some science fiction writers and editors assume we haven’t learned that lesson, yet.

Class struggle of the full-on Marxist sort is featured in “The Heart of the Union.” It has some revolutionary terrorists, taking over an asteroid mining facility about to be supposedly decommissioned, and the heroine learning that her lover is, in fact, its leader. I liked that part, but I couldn’t get past the unnecessarily bad science: organic materials and diamonds in mineable quantities on one asteroid.

A.J. Fitzwater’s “Diamond in the Rough” and M. Bennardo’s “Thirty-Four Dollars” are more about romantic attraction and kindness than their characters’ jobs, but they still don’t skimp on the work details. The resolutely gender-ambiguous narrator of Fitzwater’s story manages a spaceship’s recycling system and develops a fixation on a new security guard. In Bennardo’s story, advances in battery technology have enabled wind farms to store their energy. The narrator briefly worked on such a farm on the shores of Hudson Bay and her ministrations to a dying co-worker were not forgotten by a man she briefly met years ago. Fitzwater’s effort did not move me much one way or another. I did like Bennardo’s for its setting of a world where large parts of China, Europe and America have died, and its emphasis on kindness and politeness in the culture of the wind farmers seemed realistic.

Sean Jones’ “A Tale of a Fast Horse” was true to the anthology’s theme, but I didn’t care at all for it and its rambling, annoying narrator. Its setting seemed to be sort of a Mad Max future with combat on Arizona’s roads and a Hopi heroine woman developing feelings for the Navajo mechanic who fixes her shot-up car.

“The Belt” from Kevin Bennett is a one-note action story that is mostly about the two minutes a man has to save his brother from death due to mining accident on Titan. It’s well-done but, apart from the ending, I just found it ho-hum.

“Far, Far From Land” by Jude-Marie Green is another fishing-in-space story with the “fish” being “wild organic crystals.” I liked this one, not only for its backstory about the relationship between two ship captains, but also for the old reliable device of having a newbie going on a dangerous rescue operation.

“Ember” from Sabrina Vourvoulias tonally strays far from the anthology’s theme in a story of a spacefaring culture with three castes: singers who plant and nurture trees, traders who exchange the harvest for other goods, and the suspiciously regarded cullers who apply fire to the forests when they deem it necessary. I’m not much for fable-like stories which is what this is, a romance between a culler and singer. However, I can see others appreciating this one on its own merits.

While I’m glad to be seeing more aquaman stories lately and I liked “Air Supply” from Sophie Constable, I must admit its story of a man participating in a military program to develop such aquatic humans seems thematically outside the anthology’s bounds, more a military action story than a story of regular civilian work.

While, yes, the heroine of “Snowball the Rabbit Was Dead” does menial labor in her parents’ Indian restaurant, the story isn’t really about work but the alien that shows up and keeps insisting Snowball be buried.

I wanted to like Matthew Cherry’s “Storage.” I did like it – most of the way — even though using highly educated people to do inventories onboard spaceships seemed more another example of questionable economics. But the central mystery of the story – why there seems to be a cadaver version of the hero on board – was not adequately resolved and the story was, at the end, a big disappointment.

Jasmine M. Templet’s “Leviathan” involves the sort of housekeeping duties that would interest an Innsmouth Free Press reader and that’s all I’m going to say.

Two stories fully met my expectations. Margaret M. Gilman’s “All in a Day’s Work” has a family business of three women. They patch holes in the dome that keeps out the hydrocarbon-thick atmosphere of an alien world. Their plans to get their loans paid off are threatened by an unexpected disaster. “Big Steel in the Sky: A Future Feature Article” from Clifford Royal Johns is one of those pieces of future journalism that have no characters and almost always appeal to me. This one is a very masculine-toned piece on workers, disdainful of safety equipment and protocols dictated Earthside, building a space station.

So, as long as you don’t actually expect a tightly-focused theme anthology, you’ll probably find something here to appeal to you. Taken solely on their merits and out of context, only two of these 17 stories didn’t work for me.

You can find Menial: Skilled Labor in Science Fiction at Amazon.com.