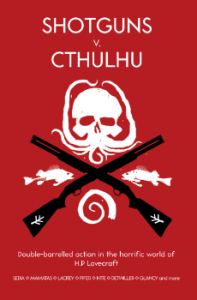 [dropcap]N[/dropcap]o, there are no Weird Westerns here. Yes, there are spies and cops and robbers here. But what this book mainly has are shotgun-toting heroes and heroines not going gently into that stygian night, but raging against Cthulhu’s coming light. Editor Laws assures us that shotguns were not a de rigeur requirement for these stories, but they show up in most of them. These tales stridently rebel against the unfair and untrue cliché, as Laws acknowledges it is, that Lovecraft’s stories have little physical action, that they are filled with “doomed and scholarly men, whose instinctive reaction to physical threat is the fainting spell.” Not that fighting always does any good in these stories. Sometimes, it just buys some time before oblivion.

Of course, it’s not all brave resistance to the forces from Outside. There’s a fair amount of possession and subversion here by those same forces. But, whether you’re looking for cosmic horror, playful variations on Mythos’ elements, or cross-genre mayhem, you’ll find something here.

Before I start categorizing stories by effect, let me mention two stories that don’t fit in those categories. If you’re old fashioned and compulsive enough to still read books starting at the beginning, you will come across the two most unsuccessful stories first. “Who Looks Back” from Kyla Ward is sort of the literary equivalent of a “shaky-cam” movie like Cloverfield: rapid cuts between two characters, brief descriptions that never linger, and a teasing plot that doesn’t answer a lot of questions. The specific setup is a thrill-seeking couple, one who wants out of the relationship after proving herself during one last stunt and the man, who goes all primal and protective when his woman is threatened. At least the setting, New Zealand’s Waimangu Park, was a good place for tentacled horrors from the subterranean depths.

I was bored for most of Rob Heinsoo’s “Old Wave,” the tale of Rain, a Polynesian teenager going on his first real voyage as a man. Since he’s taking his girlfriend to marry another island’s chieftain, it’s not a happy time from the beginning. At his destination, he finds some weird yams are being served and the disturbing cult of the Ocean Mother is growing. But I must admit, at the story’s end, I was interested by the beginnings of a cultural shift in the islanders as Rain realizes the old ways have to change if the cult is to be fought.

For me and a lot of readers of Lovecraftian stories, evoking true cosmic horror is the gold standard. I don’t fault a story for not doing it. It’s a hard effect to achieve and only one story really did that here: Steve Dempsey’s “Breaking Through.” In it, two British college students have a very unpleasant visit from some local gangsters who want to horn in on their ecstasy manufacturing business. A theology student nurses one of the two back to health and sets him on a path that has a true moment of frisson, using the paraphernalia of modern life in a Liverpool train station.

Just a notch below that is Dennis Detwiller’s cleverly titled “Lithic.” Just as that word is without its usual time-stamping prefixes, its narrator’s journal tells a tale of possession and psychic disintegration short on a lot of clues as to the chronology of things. All we know for sure is that it really wasn’t a good idea for him to return to his old hometown and take up a job guarding the rocks on Indian Hill, one of those places in rural areas where teenagers kill time with booze, spray paint and sex.

The narrator of Chris Lackey’s “Snack Time,” on the run from a Hound of Tindalos, at first seems just a breezy, manipulative jerk none too concerned about those he leaves as distracting morsels for the time-jumping, dimension-crouching Hound. But, by story’s end, what first seemed a rather amateurishly told action tale ends on a note of sinister insouciance.

Professor von Junzt of Unausssprechlichen Kulten fame sends an old student, a braucher (a practioner of German folk magic and healing), to put a stop to the plans of an English balloonist in 1828 Pennsylvania in Dan Harms’ “The Host from the Hill.”

A shotgun is at the center of Kenneth Hite’s “Infernal Devices,” which starts out as a light-hearted account of the dispute between a Montana Veterans of Foreign Wars post and the National Rifle Association over the true age of a war trophy – an odd, double-barreled, flintlock shotgun. Then, of course, we get the shotgun’s real history – its use by a German witchhunter against a nasty coven of worshipping the Elder Gods.

Robin Laws’ “And I Feel Fine” checks off most of the boxes on your Cthulhuian End-of-the-World takeout menu: earth changes, tentacled gods returning to Earth, ape-men and fish-men, and devolution in general. It starts out with the narrator clawing his way out of a collapsed parking ramp at the end of the world and goes from there to end up at place where that title isn’t really meant all that ironically.

“Welcome to Cthulhuville” from Larry DiTillio sounds like a western, but has more of a post-apocalypse sword-and-sorcery vibe. A couple of end-of-the-world survivors, an ex-con and a Catholic priest, are tasked by the demon who rules their survivors’ camp to aid the people at New R’lyeh. I can’t say I liked the turn of events there and thought it a big violation of the spirit of the Mythos. But I also can’t say it’s a totally unjustified take on the Mythos, even as seen in Lovecraft’s own tales. It certainly was not like any Mythos story I’ve read before.

There are plenty of stories with a cross-genre spirit. After hearing about it for years, I was finally glad to read a Delta Green story from one of its co-creators, A. Scott Glancy. I was definitely not disappointed with “Last Things Last.” Two agents, an old-timer and a newbie, are thrown together on a mission to sterilize a dead agent’s apartment of any possibly incriminating material. What follows is not only violent, horrible and sad, but also a meditation on the dangers of love and hope for those who secretly guard us.

Davenport, Iowa is an unlikely place for a necromancer, but that’s what a down-and-out couple find after burglarizing an old man’s home in Chad Fifer’s “One Small, Valuable Thing.” It’s the prime exhibit here of the respite-before-oblivion theme.

On the cop side of the law-and-order ledger is Dave Gross’ “Walker.” After hitting a homeless man with her car, the protagonist is introduced to a hidden side of Seattle, the side you don’t see when driving, and her carefully planned life begins to disintegrate.

Natania Barron’s “The One in the Swamp” is a steampunk effort. I can’t say it excited me all that much, but I’m not too keen on plucky young inventors of either sex throwing together machines at the last moment. Here, it’s to battle a Georgia swamp monster. On the other hand, it does have a neat variation on the Goat with a Thousand Young image.

And we have Nick Mamatas’ “Wuji.” Mamatas sort-of-runs a demented Monsanto lab producing Frankenfiction crossing Lovecraft with x. This unnatural prodigy mixes Bruce Lee, The Green Hornet TV show, Alexander the Great, 1968 San Francisco, martial arts, and the Necronomicon. It’s not horrifying, but it sure is fun and startling in its juxtapositions.

And then, off in its own corner, is the last story, Ekaterina Sedia’s “End of White.” To be honest, I’m not exactly sure what happened in this story or what the exact nature of the menace was. I’m pretty sure there are no Lovecraft allusions and I wouldn’t even say this story has a Lovecraft feel or any true cosmic horror in it. But I sure did like this story of a White Russian soldier passing hot, boring days in the Crimean Peninsula of 1920, waiting for any end to the “interminable standoff” of his and his comrades’ lives.

So, I didn’t hate any of these stories. At my harshest, I would say only four of the fifteen stories disappointed me. By my calculation, that makes this another Lovecraftian anthology worth picking up.