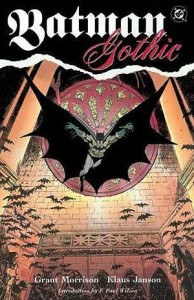 I’m going to start this column by going out on a limb and saying that, of all the 20th century comic book superheroes, Batman has ultimately proven to be the most flexible. Several years ago, in a weekly newsletter called “Comic Shop News”, one of their writers made mention of this by saying that you can drop Batman into virtually any story and he’ll fit right in. I personally argue that there needs to be a strong puzzle and/or mystery element included, but other than that, I can’t help but agree. Christopher Nolan’s remarkable cinematic reimagining of Bob Kane’s Dark Knight Detective is only the latest take of many equally valid ones that have been shown over the years. He has been in stories ranging from barely watchable camp to alien abductions to flat-out supernatural horror. Heck, DC Comics’ concept of Elseworlds (putting superheroes in different time periods and alternate worlds) was made possible by Brian Augustyn and Mike Mignola’s “alternative history of the Batman” entitled “Gotham by Gaslight”, which pitted him against Jack the Ripper during the Victorian era…and it worked so beautifully that he was the character used most often in an Elseworlds story. But today, we’re going to be talking about one of the horror gems of the Bat Crown that often get overlooked by the sheer flood of material available: Batman: Gothic.

Now the title does seem like a bit of an oxymoron, somewhat along the lines of saying, “I live in a big house home.” Fortunately, F. Paul Wilson provides an introduction that gets you into the right frame of mind: “Tonight’s Blue Light Special: The Soul”. As opening acts go, Wilson’s intro is just as readable and enjoyable as the story itself, going into detail about soul-trading (with an emphasis on how personal beliefs in matters of religion have little, if anything, to do with the actual practice) and a quick and dirty dissection of the Gothic as both architecture and a genre. It leaves you with a haunting question: When you’ve given away your soul (however you define it), what do you have to do to get it back?

The opening act starts off with seemingly unrelated events. Gotham City’s mob bosses are getting taken out, one by one…by a man they thought they’d killed, a child serial killer called “Mr. Whisper”. Nor is Whisper shy about signing his name to the work, leaving notes with various quotes from classical literature, which give a hint of the demise that he has planned for his victims. The surviving bosses decide to call the Batman in to save their hides. Their unlikely would-be savior is having a few more issues than usual, himself, being assaulted by the same nightmare (or, as faithful-but-wry butler Alfred puts it, a “daymare”, given his master’s sleep schedule) for quite a few days, now. It seems to involve his father, a private boarding school that he briefly attended as a boy, and the Black Death. Elsewhere in Gotham, a “time capsule” has been found inside the foundations of Gotham Cathedral, with plans for the Mayor to open it up at the reopening celebrations five days from now. Finally, a young girl arrives off the bus and has something about her that makes the usual predators of such girls stay away. To reveal any more would only ruin the story, so let’s just say that each of these events has ancient roots that run far deeper than they would seem at first glance.

Grant Morrison’s script moves at such a brisk, economical pace that you barely notice that the reader is being given a step-by-step walkthrough of the conventions of the Gothic genre: ancient buildings, prophetic dreams, restless spirits, sins of the past coming back to haunt the present, and men who could have been saints choosing instead to be the greatest of sinners. I would chalk this up to the fact that Klaus Jansen’s artwork takes care of most of the moody setting detail (though Morrison does throw in a few descriptive phrases here and there to add to the artwork) and that Morrison had a thorough understanding of the Gothic genre in its classical form. On the other hand, especially in the ramblings of Mr. Whisper, we also see the beginnings of a pretentiousness that says a writer’s ideas are more important than his plot. Lovecraft got away with this approach because his ideas were so big (and profound). Unfortunately, as Morrison’s ideas are less profound in their presentation, that crippling weakness would render later works, such as his creator-owned series The Invisibles (which he had the bad judgment to publicly accuse Warner Brothers of stealing from to make the Matrix trilogy) and his work on “X-Men”, flat-out unreadable.

Klaus Jansen is usually better-known in the industry as an inker than a penciller (For those of you unfamiliar with the terms, pencillers actually draw out the pretty pictures you see on a page, while inkers add black lines of varying shades to emphasize the desired details of the original sketch), so this assignment was highly unusual for him. Nevertheless, he handles the artwork like the industry professional he is, evoking the right atmosphere through heavy shadows, perspectives of vast building interiors and cityscapes that recall the German Expressionist films of Fritz Lang (his first sound film, M, is the basis of the Gotham mob bosses subplot), and surreal touches, such as a mugger’s “half-mask” and the absence of a shadow on Mr. Whisper. His finest moments are the dream sequences, however, with their constantly changing scenery, horrific imagery, and Batman’s personal self-image in perpetual flux throughout. Truly, it is the stuff nightmares are made of.

Batman: Gothic serves as both a good introduction to Batman Supernatural 101 and a great stand-alone story in its own right. But there is more to be mined from this particular vein of gold…hardly surprising, given what I said at the beginning of the column, but worth saying. Please stay tuned for more…same Bat Time, same Bat Channel.

Batman: Gothic is available through Amazon.com.